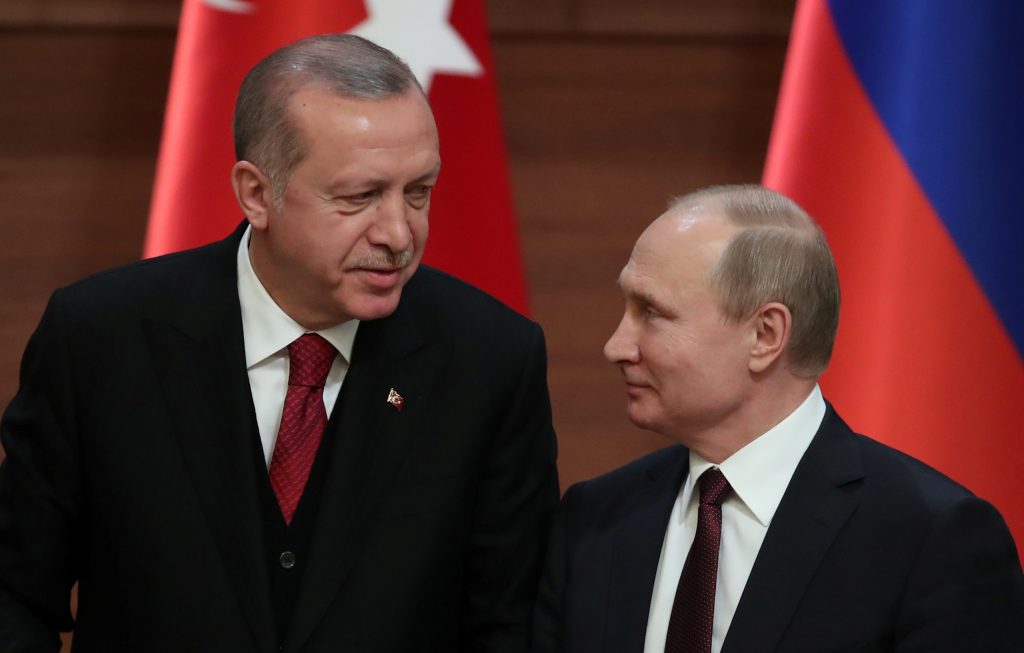 Russia and Turkey have reached an agreement which, if fully implemented, would extend the “safe zone” desired by Ankara inside Syria to nearly the full length of the Turkish-Syrian border. If followed through, armed Kurdish YPG (People’s Protection Units) will have been removed from a strip 30KM deep into Syria, and Syrian refugees now in Turkey will be permitted to settle in the expanded safe zone “in a safe and voluntary manner.” Moscow will have confirmed the diplomatic marginalization of the United States in Syria. The Kremlin also seeks to convince Ankara that it is a more reliable partner than Washington (and NATO more broadly), to strengthen the inclination of Syria’s Kurds to seek the protection of the Bashar al-Assad regime, and ultimately to reconcile Turkish President Recep Tayyip Erdoğan to the Syrian president’s continued rule in Syria.

The agreement does not apply to the stretch of the Turkish-Syrian frontier where Turkish forces have already moved deep into Syrian territory. There, Turkey will be fully in charge. But outside of “the area of [the Turkish] Operation Peace Spring,” “Russian military police and Syrian border guards will enter the Syrian side of the Turkish-Syrian border . . . to facilitate the removal of YPG elements and their weapons to the depth of 30KM from the Turkish-Syrian border . . .”  In other words, Russian soldiers and regime border guards will endeavor to create the safe zone desired by Turkey along the entire border. Once the YPG removal is accomplished, “joint Russian-Turkish patrols will start in the west and the east of the area of Operation Peace Spring with a depth of 10KM, except Qamishli city.”

As Russian President Vladimir Putin was agreeing on the ten-point plan with his Turkish counterpart, Assad was denouncing Erdoğan as a “thief” in a rare public appearance, denouncing the presence of Turkish forces on Syrian territory.

It is possible that Putin, sensing opportunity in the cratering of American credibility following the October 6 telephone call between US President Donald Trump and Erdoğan, decided to drive a spike through American salvage diplomacy without consulting Assad. It is also possible that Putin and Assad agreed to put on a “good cop, bad cop” routine using Turkey as a prop to encourage the YPG and the balance of Syria’s Kurds to decide definitively to seek refuge in the embrace of the Assad regime.

Putin’s key objective remains one of securing Assad rule in all of Syria.

Putin’s key objective remains one of securing Assad rule in all of Syria. This is exhibit A in the one domestic political talking point that still gets him enthusiastic applause: Russia’s alleged return to the world stage as a great power. Putin got plenty of inadvertent help in this regard from former US President Barack Obama. Now he has an American president doing most of the heavy diplomatic lifting in Syria for him.

Putin also senses the opportunity to widen the wedge between the United States and Turkey and between Turkey and the balance of NATO. These are geopolitical possibilities he would be foolish to pass up, especially if Washington elects in the end to cover its collapse in Syria with onerous economic sanctions on Ankara.

In short, the low-hanging diplomatic fruit for Putin is convincing Turkey that Russia is a more reliable partner than the United States. That has been demonstrated. But Ankara will be in no hurry to break with Washington or with NATO, especially if Erdoğan achieves his military objectives inside Syria. Yes, he is no doubt impressed with the disciplined sobriety of Putin and Russian Foreign Minister Sergei Lavrov. However, only reckless missteps by Washington and Brussels could bring the alliance break Putin seeks.

The agreement reached by Moscow and Ankara will not implement itself. There is no shortage of actors in the Syrian drama, some of them violent spoilers. President Erdoğan has spoken often about resettling Syrian refugees in the desired safe zone, but it is not clear how many will resettle voluntarily in places other than their original homes. Moreover, the question of what comes next in Idlib Province—where significant armed resistance to Assad still exists—will eventually present itself.

And in terms of Moscow’s long-term objectives, the genuine contempt President Erdoğan feels toward Assad—and likely vice-versa—will not be easily overcome. But the agreement brings into sharper focus a Russian vision for Syria in which Assad, after welcoming Kurds into the embrace of a forgiving state, ruthlessly suppresses their political ambitions enough for Turkey to be ultimately persuaded to withdraw forces from Syria entirely.

None of this would have been possible without a grand gesture from Washington: voluntarily surrendering its most valuable piece of leverage for an eventual negotiated outcome in Syria in which decent, inclusive governance would spring the trap door under extremists and their enablers. And the surrender was unconditional: no terms, no concessions. Putin is no genius. But under these circumstances, genius would be thin icing on a very substantial gift cake.

Ambassador Frederic C. Hof is Bard College’s Diplomat in Residence and a Distinguished Senior Fellow of the Rafik Hariri Center for the Middle East.

Turkey’s “pause” in Syria: Will the US tourniquet stop the bleeding?

Time will tell whether the United States can take advantage of a pause in Turkish military operations to broker a diplomatic solution to the Northeast Syria crisis.

Syria: Is anything salvageable?

The importance of Syria to the West generally and to the United States specifically dictates that something of value be salvaged from the wreckage. Facilitating the resurrection of ISIS and the restoration of a terrorism-abetting Assad regime to all of Syria should be unthinkable.

The United States in Syria: Why it still matters

The objective of the United States in Syria must be a full political transition from criminal, terrorist rule by family and entourage to a consensual, legitimate system featuring rule of law. Its achievement would, barring unanticipated regime collapse, take years of patient, focused, and disciplined effort.