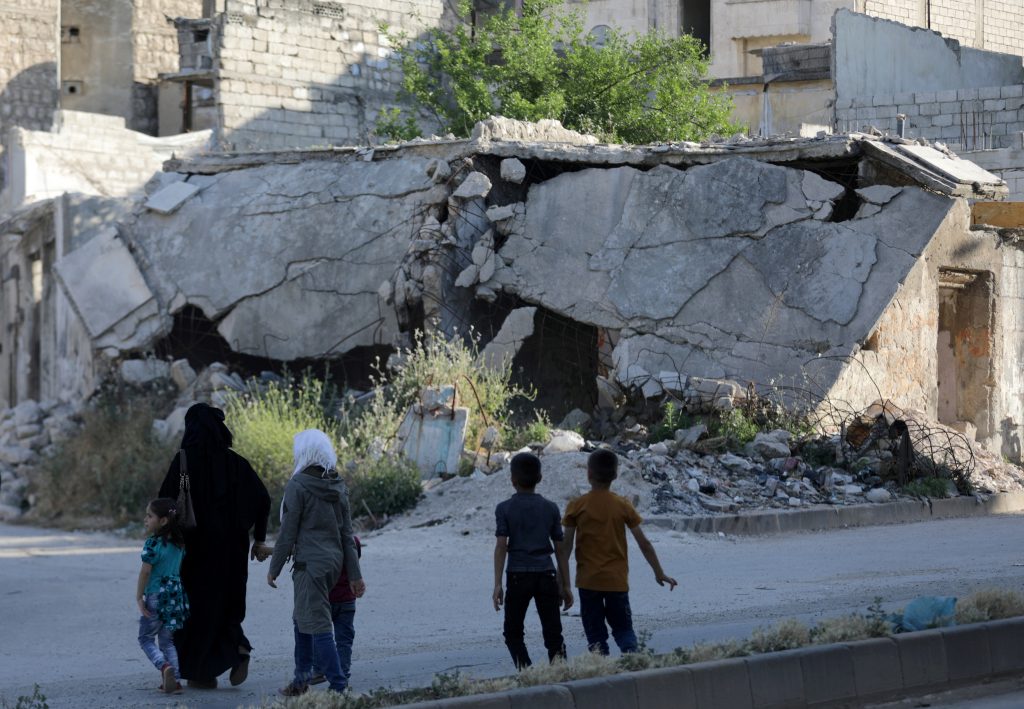 FILE PHOTO: People walk near rubble of damaged buildings in the city of Idlib, Syria May 27, 2019. Picture taken May 27, 2019. REUTERS/Khalil Ashawi/File Photo

It was an especially bleak year for Syria as displacement across the country continued especially in Idlib province. As families attempted to return from neighboring countries, they often times found themselves arrested, conscripted, or without a home to return. The Assad regime sought to normalize relations with its neighboring Arab states along with the encouragement of its patron, Russia. Unresolved were issues related to former Islamic State (ISIS) women members detained in northern Syria by Syrian Democratic Forces led primarily by Kurdish forces. The death of ISIS leader Abu Bakr al-Baghdadi as well as the annexation of the Golan were surprising developments that ultimately did not change the tide of air led assaults on civilians in Syria. Below are our top five blogs in 2019 that touched on these important issues that captured the attention of our readers.

A new flurry of reports suggesting Israel may formally annex the occupied Golan Heights is music to the ears of Bashar al-Assad, a mass murderer who would welcome a decisive change of subject from his own criminality to what he will characterize as Israel’s theft of Syrian land. Among the delighted will be Iran and Hezbollah, whose resistance pretentions will be gratuitously elevated above their sewer of transnational terror, drug running, and money laundering. As there is nothing substantive to be gained by Israel through formal annexation and much to be potentially lost, one wonders why its proponents are so eager to do it. Read more here.

The relationship between the Islamic State (ISIS) and its female members has always been complicated. On the one hand, the extremist group imposed rigid restrictions on women’s dress and their ability to appear in public places. On the other hand, it conscripted and trained many women to undertake various tasks within its ranks. Now, as the military defeat of ISIS draws near, many women want to go back to their lives before they joined. Questions persist about the fate of these women—both local and foreign. This issue is particularly important for the Syrian Democratic Forces (SDF) that have recovered areas from ISIS and are holding many former ISIS women members as prisoners in squalid camps; often along with their children. Read more here.

The outcome of the fourth Arab Economic and Social Development (AESD) summit held in Lebanon last month spoke volumes about the Middle East’s deep divisions. Iran’s role in the Levant and the question of Syrian President Bashar al-Assad’s legitimacy are unquestionably polarizing issues in the region. Both have potential to slow down the process by which Syria’s government, citizens, and fellow Arab states could reach agreement on a lasting settlement to the country’s eight-year civil war that could potentially pave the path for peace and stability returning to Syria. Read more here.

The institutionalization of demographic change in Syria – Hasan Arfeh

Before 2011, Syria’s population was estimated at twenty one million people. But after eight years of conflict, five million fled the country, and more than six million are internally displaced people (IDP)s between Idlib province and northern Syria. This displacement is not merely a consequence of the war, but rather a specific goal of the regime and its allies’ strategy in order to regain control of the country. The regime carried out widespread forced displacement in Homs, Damascus, Aleppo and the nearby countryside to effect demographic change. The regime rewarded loyalists with homes in Damascus and punished opposition figures and communities by forcibly evacuating them from their homes to the other side of the country. This tactic is integral to the regime in order to consolidate control over Syria after the war ends. Read more here.

The death of Baghdadi: How ISIS used al-Qaeda’s mistakes to grow a caliphate – Amanda E. Rogers

Optimistic predictions about the end of the Islamic State (ISIS) surged in the wake of US President Donald Trump’s October 27 press conference announcing the death of the ISIS leader Abu Bakr al-Baghdadi, but prove misguided in the long term. The threat posed by ISIS remains high, particularly outside the para-state’s previously held territories in Iraq and Syria (to say nothing of affiliated organizations from Libya to the Philippines). The death of Baghdadi is highly unlikely to significantly impact the organization in any substantive manner. Read more here.

The Middle East continued to be a tumultuous region this year, as protest movements expanded across Iran, Algeria, Sudan, Iraq, and Lebanon. As we have reported and provided analysis on these ongoing issues, it is clear that much remains to be resolved in 2020. Below are the top five blog pieces of 2019 that touched a nerve with our audiences and were the most viewed of the year.

As we look back at the tumultuous year for Syria in 2018, it’s sadly ending with the withdrawal of US troops and an unclear US-Syria policy moving forward. The implications of this policy are likely far reaching. Time will tell what the damage will be and how the conflict will continue to evolve. Below we have listed our top viewed articles of the year. By far, the most viewed is the one penned by our outgoing director, Ambassador Frederic C. Hof as he moved on to other scholarly pursuits teaching at Bard College. Thankfully, he’s continued writing and our viewers and center are grateful for it.

Looking back: Our top five blog posts of 2018

As we bid adieu to 2018, we look back at the events of a challenging year both domestically and abroad. Below are our most viewed articles hitting on pressing issues. In case you missed them, read our biggest hits of 2018.