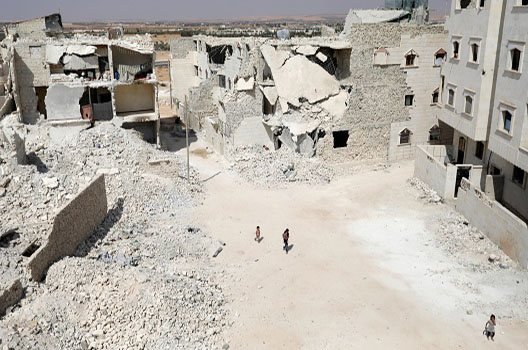 A vibrant civil society is key to Syria’s future. But across Syria’s so-called de-escalation zones, the hard-won advances of Syrian activists and humanitarians risk being rolled back in the name of “early recovery” and “reconstruction.”

This is the main message my fellow Syrians and I brought to the 72nd session of the UN General Assembly in New York last week. However, as world leaders met to discuss the future of Syria (most often in the absence of the very Syrians charged with leading that future), one point became abundantly clear: Syria is facing a dangerous turning point. International interest is dwindling in the face of other critical conflicts like North Korea and Burma, and conversations about Syria are quietly shifting away from an evasive political solution and towards the allure of post-conflict reconstruction.

The reasons for the shift are clear, and some are positive. Levels of violence are decreasing. ISIS strongholds are diminishing. And in some parts of the country, the daily torrent of regime-sponsored aerial attacks has diminished. Against this backdrop, countries are understandably eager to lend a hand in recovering, stabilizing, and rebuilding the country. And so are we. Syrian civil society groups are leading the charge in demining activities. We are first on the ground reinstalling electricity and ensuring proper water sources are functioning. And we are determined to ensure all Syrians have access to food and medical care.

But as much of the violence recedes, there’s a hidden risk in moving too quickly towards recovery—particularly if it comes at the expense of our freedoms and values of Syrian civil society. Deescalation should not be confused with peace. And the quest of Syrians for freedom cannot be bought off with the promise of stability.

The fact is, while the violence has decreased, it has not disappeared. In August alone, nearly 800 civilians were killed throughout Syria. In Idlib—one of Syria’s four de-escalation zones—in one 72-hour period, more than 500 airstrikes were recorded by on-the-ground sources. Hospitals are being bombed, rescue workers killed, and schools attacked. More than 800,000 Syrians remain trapped in besieged areas, and thousands have been forcibly transferred to Idlib. This is not what peace looks like. And this is certainly not grounds for reconstruction.

Where the establishment of de-escalation zones has effectively reduced violence, we have witnessed an ebbing of the freedoms: a decline in freedom of movement, expression and assembly—a closing off of the liberties Syrians have fought and died for. In areas where violence has effectively ceased, violations of human rights have not, and rampant arbitrary detention, forced displacement and the constant threat of retaliation continues. For all the talk of de-escalation, tens of thousands of Syrians remain detained and forcedly disappeared. Too many families do not know whether their loved ones are dead or alive.

If done wrong—and without the urgently needed input of Syrian civil society—this emerging rush to recover and reconstruct vast areas of Syria risks solidifying and even exacerbating these trends. Further, these zones risk becoming long-term divisive solutions rather than temporary measures.

If the next phase of work in Syria is not channeled through an inclusive civil society that will be allowed to operate within these zones, but instead through an exclusive group, some of whom have committed war crimes, it is extremely unlikely that reconstruction funds will be distributed democratically or equitably across regions. Instead, it will re-create inequalities, with some areas becoming disadvantaged and others once again punished. This funding will, thus, continue to fuel this war, and prepare for the next.

To do Syrians justice, all future assistance to Syria must be provided in a manner that reinforces the efforts of grassroots activists and humanitarians on the ground. Aid must be channeled through the local communities. There must be clear criteria for deescalation zones, such as not allowing armed forces in, ensuring freedom of movement to reduce the risk of creating another secluded, camp-like areas, and allowing Syrian civil society to access, work and monitor activity in those areas. Under these conditions, the zones could be the temporary arrangements needed to tease-out scalable solutions for Syria, and prepare for a democratic, inclusive and just society.

We as Syrian civil society know the needs of our people best, and we are uniquely positioned to lead Syria to a stable, peaceful future. From holding local elections to forcing out extremists, our groups exemplify the best Syria has to offer, and we are well placed to ensure traction in our people’s collective desire for dignity. By amplifying our voices, which echo the needs of those we serve and work with, the international community can ensure that their contributions and taxpayer money will not be used as a tool to consolidate control and paralyze the political and transition negotiations that are still key to solving Syria’s war and creating a sustainable peace.

Ultimately, no amount of aid will end the war, and the current options to do so may not bring an everlasting halt to fighting. This can only be achieved through a political solution that is shaped by and for Syrians. So long as a political transition remains out of reach, so does Syria’s recovery. Reconstruction funds may play a role in pushing warring parties to negotiate, but they also risk preemptively rewriting the end of the conflict in ways that perpetuate further unrest and violence. However, by distributing aid through Syrians themselves, rather than parties to the conflict, and ceasing to ignore the need for accountability and transitional justice, the international community can tip the scales in favor of long-term peace.

Dr. Rouba Mhaissen is a Syrian-Lebanese economist, activist, community mobilizer and development practitioner who works on development issues in the MENA region, particularly forced migration and the Syrian refugee crisis. She is the founder and director of Sawa for Development and Aid, a nonprofit organization that supports Syrian refugees in Lebanon, and Sawa Foundation UK, which supports forced migrants in Europe and the Middle East.

This article originally appeared on Syria Deeply. You can find the original here. For important news about the war in Syria, you can sign up to the Syria Deeply email list.