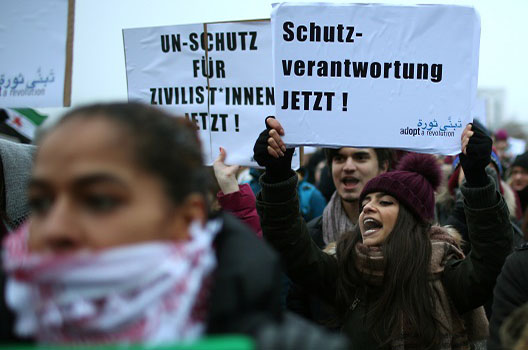 America and its allies have exposed a timeless and troubling truth: without the projection of power, laws — never mind nascent norms, like the much-ballyhooed Responsibility to Protect (“R2P”) — are worth as much as the paper they are scribbled on.

Under R2P, a state must protect its people. In essence, a state must prevent or respond to atrocities—and certainly must refrain from committing such atrocities itself. If a state fails to protect its people, other states must intervene. Jurists and statespersons developed R2P to prevent states from allowing—or committing—atrocities; encourage and empower states to adopt a more sophisticated idea of sovereignty and move past reflexive non-intervention; and, over time, nudge leaders and peoples of the world to internalize ideas and move past dithering, paralysis, or apathy in the face of atrocities.

In the 1990s, as the world grappled with the consequences of the conflict in Somalia, Rwanda, Iraq, and the Balkans, jurists reconsidered the law on humanitarian intervention. In 2002, some of them tried to redefine the law by refining it. An international commission published “The Responsibility to Protect,” an important report that prodded states to help people prevent, respond to, and recover from atrocities. R2P gained traction at the United Nations and in regional organizations like the African Union over the next decade. In 2005, UN member states unanimously adopted the World Summit Outcome Document—and, in so doing, essentially enshrined R2P as a distinct doctrine. During a UN General Assembly debate in 2009, state representatives worked to build out R2P’s principles. Then, in 2011, the UN Security Council adopted Resolution 1973 to authorize states, “acting nationally or through regional organizations or arrangements… to take all necessary measures to protect civilians and civilian populated areas under threat of attack” in Libya.

Now, R2P is not law. But, although it is a nascent norm, it was not just concocted by a committee 15 years ago. R2P epitomizes the old idea that a state has responsibilities to — not just authority over –its people, and is rooted in ancient traditions of intervention and interdependence. It is the extension of states’ obligations under the UN charter, multilateral treaties, and crystalized customary law — obligations they have created by ceding sovereignty in practice and by crafting a more sophisticated sense of sovereignty in principle.

Contrary to the caricaturized sense of sovereignty used by some as a shield against accountability and by others as cloak for apathy, polities have been intervening in each other’s affairs since antiquity –and have often done so by harmonizing their interests and ideals. Two centuries ago, as the contemporary international legal-political order truly began to emerge and evolve, European states intervened in Syria’s neighborhood: Greece and Mount Lebanon. In the 1820s, they assisted Greek revolutionaries in their war for independence — first by funding and essentially arming them, then by defeating the Ottomans and Egyptians militarily. From the 1840s to early 1900s, they intervened to protect communities in Mount Lebanon — and conducted the first sort of contemporary humanitarian intervention in 1861, after the Ottomans failed to stop, and in some instances enabled, sectarian strife.

Today, American administrations have retreated from their responsibility to project power and protect principled order — perhaps because Americans, on the whole, have been burned by recent adventurism, feel fatigued by their contributions to world order, and (justifiably) wish to engage in some nation-building at home. Worse still, they have retreated while continuing to preach about principles to a greater degree than their predecessors in power (except the French, of course) ever did. Ascending the familiar heights of hypocrisy, they have somehow managed to undermine interests, alienate allies, betray values, and abandon leadership — all at once.

Syria and R2P symbolize the fallacies and failures of Obama’s foreign policy. During the 2009 UN General Assembly debate on R2P, for instance, Ambassador Rosemary DiCarlo identified “the lack of political will” as “the greatest obstacle to swift action in the face of sudden atrocity” and implored the world to “summon the courage of our convictions — and the will to act.” Indeed. In August 2011, the Obama administration announced that it considered the prevention of mass atrocities and genocide to be “a core national security interest and a core moral responsibility of the United States.” Amen. After visiting the Holocaust Museum in 2012, Obama unveiled the Atrocities Prevention Board, requested the first-ever National Intelligence Estimate on the risk of atrocities, and crafted “a comprehensive strategy” with “new tools to prevent and respond to atrocities.” Preach. Then, In 2013, after the Assad regime gassed Ghouta, former Secretary of State John F. Kerry thundered on about obscenities and signatures of sarin. And just a few months ago, former UN Ambassador Samantha Power — that perplexing prophet of humanitarian interventions — asked Russia and Iran, but perhaps not herself or her superiors, if they were capable of shame.

But the preachers never left their pulpits. When the men with guns came, they hid in their church of civility — and did nothing to protect principles that they had upheld not only as virtuous, but as vital to American interests. Obama did not summon the will to act. He did not develop, or allow others to develop and implement, a comprehensive strategy. For all his highfalutin rhetoric and bureaucratic redecorating, he never committed himself to R2P or to prevent atrocities and acts of aggression more generally — because, you know, let me be clear, this is not the 19th century.

In the six years since America and its allies dabbled with R2P in Libya — an intervention seemingly motivated by the same sort of political machinations and obsession with optics that drove non-intervention in Syria — the Assad regime has killed, tortured, displaced, and dehumanized millions of people. It has violated international law. It has run roughshod over institutions and precious principles. It has ripped apart the threads of our common humanity. Emboldened by Obama’s zealous inaction, Assad’s  allies — Iran and Russia, above all — have done the same in Syria, throughout the Middle East, and in the West itself.

Meanwhile, constrained by Obama’s caution, America and its allies eviscerated in practice what they elevated in principle. They adopted a bunch of tactically disjointed, strategically counterproductive, morally abysmal, and logically barren half-measures and remedial programs. They reduced R2P to the latest iteration of the age-old ‘Option to Intervene’ — nothing more, nothing less. By not exercising that option in Syria, they squandered the chance to craft a comprehensive strategy, twin strategic interests with moral obligations, galvanize the transatlantic alliance, and push the law forward. And they enabled history’s latest bunch of thugs to transform Syria into just another problem from hell.

Anthony Elghossain is a lawyer and writer based in Beirut. Follow him @aelghossain.