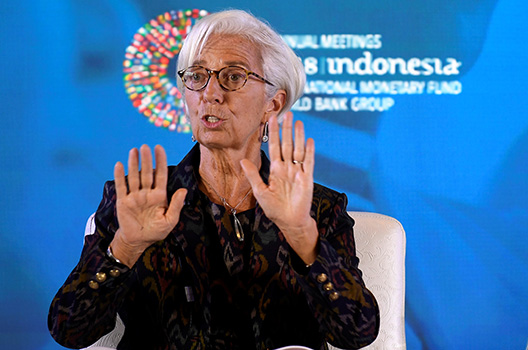 This week, the Boards of Governors of the International Monetary Fund (IMF) and World Bank Group (WBG) will convene for their annual meetings in Indonesia to discuss issues of global concern, including global economic growth. In the context of the meetings, the IMF publishes the World Economic Outlook (WEO) which analyzes global growth prospects in the short- and medium-term and the risks which impede these prospects. While this October’s report still predicts a steady expansion for 2018-19 at a 3.7 percent growth rate, this forecast is 0.2 percent lower than in April. One of the major reasons for this downward correction are recent trade policies which are expected to continue to be a downward risk leading to further disruption, uncertainty, and weaker growth.

Key Takeaways from the Report

Clouds on the Horizon?

This WEO is published just after the ten-year anniversary of the collapse of the Lehman Brothers which sparked the global financial crisis. While a downward correction of 0.2 percent in global growth is not outright alarming, experts do warn of potential clouds on the horizon. Bart Oosterveld, director of the Atlantic Council’s Global Business and Economics Program sees the global economy moving towards slower growth, “there is no estimate out there that foresees a cataclysmic financial crisis. Recovery is well underway, and, something else the IMF documents in this report, at some point we are going to have a cyclical downturn.” Equally, Christine Lagarde, the IMF’s Managing Director warns about rising debt levels that “reached an all-time high of $182 trillion — almost 60 percent higher than in 2007.” Combined with the erosion of fiscal buffers, the rising public debt levels urgently call for policies that strengthen the defense system of the global economy to prevent seeding the ground for the next economic crisis.

Uncertainty around trade deals and rising tensions following the United States issuing tariffs on several economies (and subsequent counter measures on US goods) have formed another cloud that has overshadowed the growth forecast and has the potential to rain on projections for the foreseeable future.

The United States, Canada, and Mexico recently agreed on a revised NAFTA proposal which is expected to be signed at the end of November. While the deal, “USMCA” is a move in the right direction toward restoring market certainty, the trilateral agreement will still face a long road of legislative approval and ratification. Equally, on the European continent, uncertainties surrounding the final makeup of the Brexit deal separating the United Kingdom (UK) from the European Union (EU) continue to weigh on global growth prospects as the UK will not be able to engage in formal trade negotiations with third countries before its formal divorce from the EU.

The escalating trade tensions between the United States, China, and several other countries affected by the steel and aluminum tariffs issued by the United States, combined with threats to the international rules-based trading system, ring the alarm bells of growth forecasters. To date, President Trump has tariffed over $260 billion of Chinese imports into the United States, with increasing threats to expand tariffs on all Chinese imports if China does not take concrete steps to meet the demands of the United States. There is a potential window of opportunity for presidents Trump and Xi to engage in de-escalating talks at the sidelines of the Group of Twenty (G20) in November, yet with the US economy at full employment and a strong US dollar, Trump is not under any pressure to reach a deal.

In addition to a likely escalation of trade tensions with China, potential US tariffs on imported cars and car parts on the basis of national security considerations might hamper future growth prospects. In May, President Trump ordered the Commerce Department to investigate “whether imports of automobiles, including SUVs, vans and light trucks, and automotive parts into the United States threaten to impair the national security as defined in Section 232.” Depending on the findings of the report which was originally expected to be released already in August, President Trump can decide to issue tariffs – which threaten to disrupt the global economy, increase market uncertainty and financial market volatility, and irreparably hurt global supply chains.

The Biggest Threat might not be an Economic Risk

Once the tariffs are issued, affected countries can issue a formal complaint with the World Trade Organization (WTO) and announce counter measures in compliance with global trade rules. A minimum of three WTO judges is needed to process a case and they decision is binding for all 164 WTO members. However, the United States is currently threatening the existence of this global dispute mechanism by blocking any (re) appointment of its judges and has repeatedly warned it would leave the WTO altogether if it does not ”shape up,” with US President Donald Trump calling it “the single worst trade deal ever made.” Currently, only three WTO judges remain- two of which will see their mandate run out in December if they are not re-appointed. There is consensus that the WTO and the rules of trade need to be revised, with recent reform proposals by the European Union, Canada, and like-minded countries that seek to address current shortcomings of the system. In Lagarde’s words “Going forward, what we need are “smarter rules” for trade that ensure all can gain. We need to fix the system, not destroy it” – for if there is no system, the risks to the economy are far greater than .02 percent.

Marie Kasperek is Associate Director of the Global Business and Economics Program at the Atlantic Council. Follow her on Twitter @TRADE_in_ACTION.