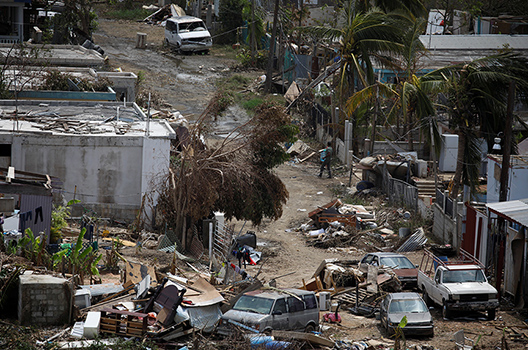 As outrage grows over the federal government’s slow response to the devastation caused by Hurricane Maria in Puerto Rico, it is fair to ask why this effort seems halting compared to that for Hurricanes Harvey and Irma in Texas and Florida. Why was the United States able to move within hours to help Haiti after the 2010 earthquake, but our effort to assist Puerto Rico, a US territory, seems to have taken a week to get off the ground? Politics aside, the devastation Maria caused in Puerto Rico puts the spotlight on four fundamentals of disaster response in the United States.

First, where you are before disaster strikes makes a difference, both in terms of a state’s overall resilience and its geography. Texas and Florida entered hurricane season with strong economies, mostly modern infrastructure and relatively high levels of emergency preparedness.  Puerto Rico entered hurricane season in the midst of a years-long economic crisis that contributed to crumbling physical infrastructure in many places, not unlike the situation in New Orleans in 2005. As a result, Puerto Rico was more vulnerable to Maria and more likely to face widespread power outages, hospital closures, and waste-water treatment plant shutdowns. Puerto Rico’s island geography also means that relief supplies, aid workers, and critical equipment—of course—cannot be driven over land, but instead have to be flown in or brought by ship, which is much more logistically challenging.

Second, in the United States, disaster response is a partnership between state and federal government.  In Haiti, the US government answered Port-au-Prince’s appeals for help, basically stepping in and running the response, but in the United States, governors are in charge and they ask for assistance from the federal government.  This emphasis on state government is built into the very foundations of our federalist system and governors rarely cede this control. In 2005, even when the situation on the ground after Hurricane Katrina was at its most dire, neither Mississippi Gov. Haley Barbour nor Louisiana Gov. Katherine Blanco agreed to then-President George W. Bush’s request to take over the relief effort.

The partnership between state and federal government often works well, and it has grown much stronger and more effective because of the many lessons learned on both sides from earlier disasters like Katrina and Hurricane Sandy in 2012.  In Texas and in Houston just weeks ago, state and federal officials showed this partnership can work even when facing “once in 500-year” storms.  But what happens if the state government’s ability to govern effectively is significantly degraded? What happens if a governor and state government can no longer communicate effectively, assess the damage, and figure out what it needs to ask for in terms of help?  This is what has happened in Puerto Rico, and it is one of the reasons the response effort there is going slowly.

Third, in situations when a state government is rendered largely unable to provide basic services, the federal government has to lean in more than it normally would.  Former Federal Emergency Management Agency (FEMA) Administrator Craig Fugate often said, “go big and go fast.”  In a March 2017 interview, Fugate said:

“You need the ability to… make decisions about when to launch a large response because triggering events have occurred, even when you don’t have any requests yet or any information.  The most perishable and precious commodity in disaster response is time, and you never get it back.”

Early on the morning of September 20, Maria made landfall on Puerto Rico as a Category 4 storm, scoring a direct hit on the island. FEMA search-and-rescue teams began operating the next day, and the US military started assessment missions as well as search-and-rescue operations, but compared to the relief response for the Haiti earthquake, these efforts were modest. Help came to Puerto Rico in dribs and drabs for the first several days after the storm.  It was not until FEMA Administrator Brock Long visited the island a week after the storm hit that the Trump administration seemed to grasp the full scope and scale of the devastation, and more substantial assets started to flow to the island.  Shortly after Long’s visit, the federal government sent a one-star general to lead the military assistance effort, increased the overall level of military assistance, decided to send the USNS Comfort, a Navy hospital ship, and waived the Jones Act so that non-US ships could dock in Puerto Rico with supplies. But precious time had already been lost and much of the island’s population remained in the dark, without clean water, and with dwindling food supplies.

Fourth, presidential leadership matters. When the president of the United States makes it clear that the priority is disaster response, two important things happen.  First, senior officials are more willing to take risks and emphasize speed rather than worrying about protocols and procedures.  By making it clear that the aid effort is the priority, the president essentially gives top cover to his senior staff.  Second, when the president prioritizes a disaster relief effort, he or she makes it easier for FEMA, the incident manager, to get what it needs from its partners in the US government, such as the Department of Defense (DoD), the Department of Health and Human Services, and a whole host of others.  FEMA is primarily a coordinator.  It does not have scores of helicopters, planes, hospital assessment teams, trucks, or large numbers of its own workers who can do everything that is needed on the ground.  FEMA relies on a combination of other agencies, like DoD, and contracts to bring assets into a disaster area.  It is much easier for FEMA to get what it needs, and get it quickly, when FEMA has the clear backing of a president who is personally engaged in the response effort.

US President Donald J. Trump does not seem to have made it clear in the early days of the crisis that the Puerto Rico response was a high priority.  Perhaps that is one of the reasons why DoD officials were repeatedly quoted last week saying that DoD had provided everything that had been requested, yet when the three-star general that will now lead the military effort got on the ground almost ten days after the storm hit, his assessment was that he didn’t have the resources he needed.

Being prepared and having resilient infrastructure and systems before disaster strikes can soften the worst impacts of a disaster and give communities a head start toward recovery.  In the United States, state governors are in the lead during disasters, working in partnership with the federal government.  That partnership works well, but when a state is hit with a catastrophic event, the federal government has to lean in and provide help without waiting to be asked, even if it may result in some inefficiencies on the margins.  And last but not least, leadership from the top matters.  Without it, agencies may debate how and where to allocate resources, senior officials may be reluctant to take important risks, and valuable time gets lost. The slow federal response to get Puerto Rico back on its feet after Maria shows what happens when we forget the fundamentals, and in this case, it is American citizens who are paying the price.

Christine Wormuth is the director of the Atlantic Council’s Adrienne Arsht Center for Resilience.  Follow her on Twitter @cwormuth.