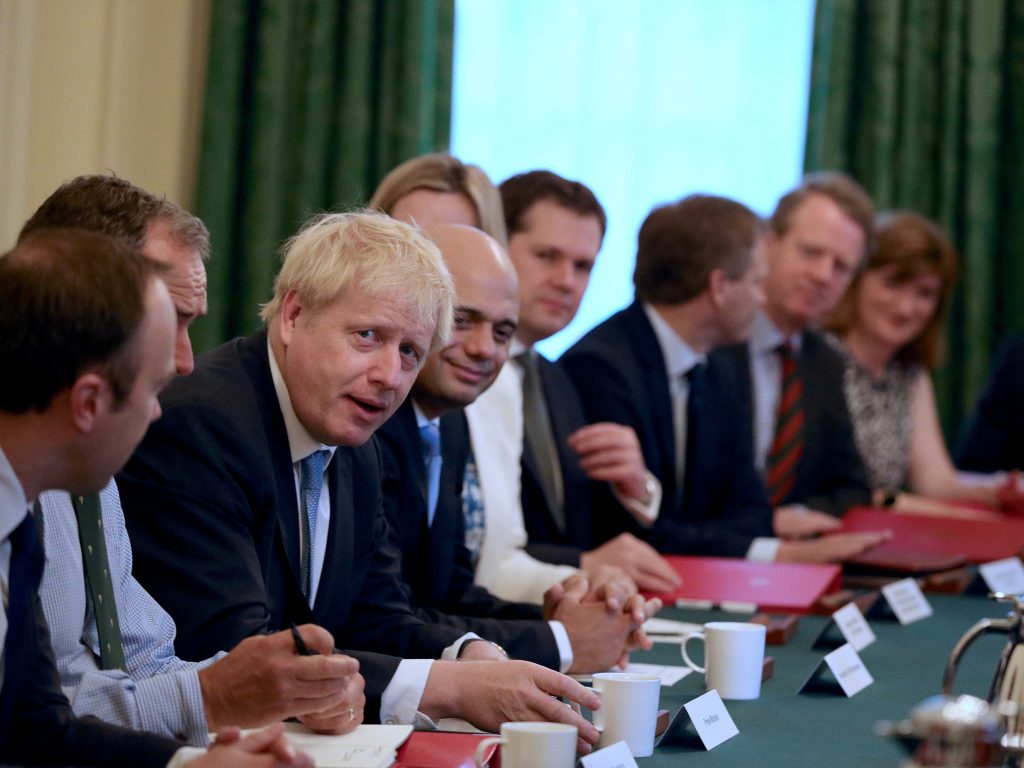 Boris Johnson, Britain’s new prime minister, is a man in a hurry. He has promised that the United Kingdom will quit the European Union (EU)—with or without a withdrawal agreement—on October 31 and he has prepared the ground for an early general election.

And if parliamentary arithmetic gets in his way soon, then that election could happen very quickly indeed.

Within hours of taking office on July 24, Johnson conducted one of the most ruthless ministerial purges by a ruling party, sacking ten of the previous twenty-eight ministers entitled to attend cabinet, forcing the resignation of another seven, and leaving just eleven ministers from former prime minister Theresa May’s government.

And new cabinet members are not just Boris Johnson loyalists, but were also asked to sign a declaration that, if necessary, they would back any decision to leave the European Union without a deal.

But whether that comes before or after October 31 is far from clear. There’s a presumption that Johnson will direct his principal efforts to securing a revised withdrawal agreement with the EU—which he would sell as a ‘new deal’—before that date so that the UK would end its forty-six-year long EU membership in a fairly orderly manner. And if he can’t secure a deal, then he has already set up a unit, under his former confidante-cum-rival Michael Gove, to prepare for a no-deal Brexit.

Assuming Johnson either secures a deal or finds a way to override or circumvent parliamentary objections to leaving the EU without a deal, he would likely seek to crown this achievement by holding a general election immediately afterwards in order to cash in on what he would no doubt claim to be a magnificent triumph that proved Britain could ‘take back control’ over its affairs.

But then there’s the question of whether Johnson’s dismissal of Cabinet ministers who stayed loyal to Theresa May when Boris and other senior Conservatives jumped ship, will now turn on the new prime minister in sufficient numbers to force an election before the Brexit date.

The opposition Liberal Democrat Party has already asked the Labour Party whether it will back a no-confidence motion in Johnson—while, for its own part, Labour is currently planning to force a vote of non-confidence once Parliament resumes after the summer recess. Johnson’s ruling Conservatives currently hold only a two-vote majority in the House of Commons (courtesy of nine votes from Northern Ireland’s Democratic Unionist Party) and even that is likely to fall to just one vote as a result of a by-election due to be held in Wales on August 1. So, if by early September Johnson has not found some way to unite his own fractious party, the unthinkable might actually happen: rebel Conservative members of Parliament, including a number who once held very high office, might vote against him.

This is a serious possibility, though whether it is probable remains impossible to assess at this stage. Indeed, while Brexit dominates the headlines and Johnson’s own public announcements, other issues will likely test the new prime minister’s mettle over the next few days.

The most immediate issue concerns Iran. The UK has detained one Iranian tanker that it believes was carrying crude oil to Syria in defiance of EU sanctions, and Iran, which supports the Syrian government, has seized a British-registered tanker in the Gulf in response. But while an agreement covering mutual release of these vessels would seem to be a logical solution, Johnson is likely to be judged not by how he resolves the tanker crisis but by whether he also secures the release of imprisoned British-Iranian aid worker Nazanin Zaghari-Ratcliffe from jail at the same time. This is crucial to his own personal reputation, since, while he was foreign secretary in 2017, Johnson said Zaghari-Ratcliffe, who had been arrested in Tehran at the end of a visit with her baby to see her parents, had been “simply teaching people journalism,” a major gaffe which contributed directly to Iran’s determination to keep her imprisoned, sometimes in chains.

Moreover, Johnson and his new defense team have to operate in the Gulf with only a couple of warships and, for the first time in more than fifty years, without any certainty that the US will guard Britain’s back.

If there is to be a pre-Brexit general election, the no-confidence vote has to be held by September 3. Parliamentary procedure and election rules mandate that he if loses a confidence vote, then there must first be a fourteen-day period to see whether another person can command a parliamentary majority and, if no one can, then Parliament would have to be dissolved no later than September 19 in order to hold a general election on October 24, the last date available before the current departure deadline expires.

At this stage it is frankly impossible to say just what the results of such an election would be. Both of Britain’s two dominant parties are split, with the Conservatives now an increasingly Leave party but with a strong Remain contingent in parliament, and the Labour Party diametrically opposite, with a strong Remain base but with a vocal Leave element in Parliament.

Then there are the Liberal Democrats, an unequivocally Remain party, whose poll ratings and election results are surging and Nigel Farage’s Brexit party, which wants to see the UK quit the EU under any and all circumstances and which, while it has no representation in parliament at present, trounced most of the traditional parties in the recent elections to the European Parliament in May.

In effect, a classic two-party system (with room for nationalist and regionally based parties in Scotland, Wales, and Northern Ireland) is now—at least in England, which has 533 of the UK’s 650 parliamentary seats—apparently on the verge of becoming a four party system, with each securing around twenty to twenty-five percent of the vote.

Over the next six weeks, much could change. Farage’s Brexit party has the potential to split the Leave vote and thus destroy Johnson’s premiership, or Farage could seek to reach some kind of accommodation with Johnson or even stand aside completely in existing Conservative seats.

Labour could finally and unequivocally come out as a party officially committed to remaining in the EU under all circumstances; at present, as Labour leader Jeremy Corbyn said July 25, it will campaign for Remain in the event of a “bad” Johnson deal. But might such a declaration come too late to prevent a spit in the Remain vote with the Liberal Democrats, leading to a Johnson electoral victory? Or could Labour continue to dither, hemorrhaging pro-Remain votes to the Liberal Democrats?

In sum, in an early general election anything could happen, not least since there is a general assumption that in Scotland, the Scottish National Party will sweep the board securing most of the fifty-seven seats, and thus, potentially, ensuring once again that no party has an overall majority at Westminster.

And if Boris Johnson is able to hold an election at the time of his own choosing, after he has engineered Britain’s exit from the European Union, then his troubles might only be beginning. Because he will then have to face the fact that two parts of the UK, Scotland and Northern Ireland, voted to stay within the EU in the 2016 referendum. In Northern Ireland he will have to solve the question of what kind of a border the province might have with the Republic of Ireland, and how it might be policed without prompting any return to the violence that characterized the thirty years of the Troubles from 1968 to 1998.

And in Scotland, First Minister Nicola Sturgeon wasted no time in writing to the new prime minister on July 25 to say she was looking forward to holding discussions with him on a new referendum on Scottish independence while her party leader at Westminster, Ian Blackford, sarcastically welcomed the arrival of “the last prime minister of the United Kingdom.”

In conclusion, Boris has to not only face the challenge of Brexit, but also the potential breakup of the United Kingdom of which he is now the prime minister.