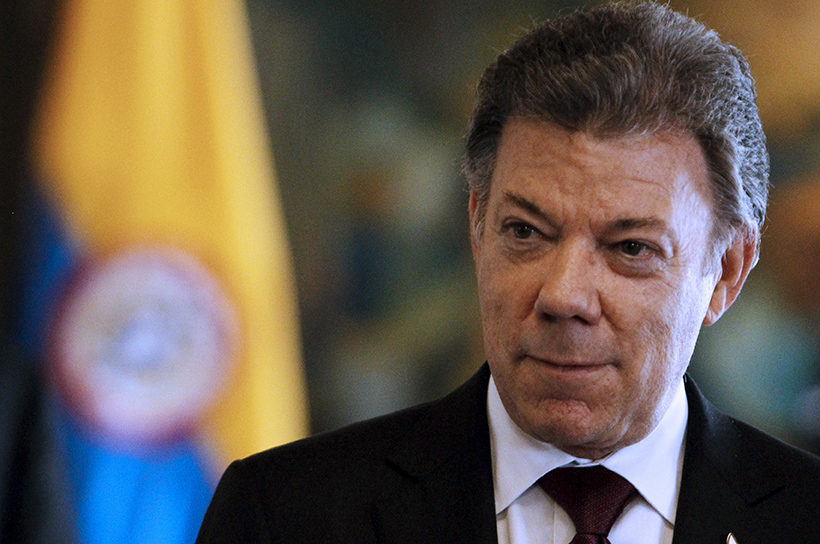 On the brink of ending Latin America’s longest-running armed conflict, Colombian President Juan Manuel Santos must now make a concerted effort to convince Colombians that the peace deal he struck with the leftist guerrillas is worthy of their support.

Santos on August 24 said government negotiators and the Revolutionary Armed Forces of Colombia (FARC) rebels were putting the final touches to a peace deal. A formal announcement was imminent. [Update: The deal was announced later on August 24.] The deal will be put to the Colombian people in a plebiscite.

“There has been an enormous and very emotional opposition led by former President Alvaro Uribe that has basically said that this peace deal is far too generous for people who have murdered and destroyed at the length and breadth that the FARC has done over the past forty-five years,” said Peter Schechter, director of the Adrienne Arsht Latin America Center at the Atlantic Council.

The question of transitional justice—holding the rebels and members of the Colombian military accountable for their crimes and ensuring justice for their victims—has been a key point of contention for critics of the deal.

“Everybody wants peace, but not everyone is sure that this peace deal is the right peace deal,” said Schechter.

“It would be up to the president and a lot of independent voices to convince Colombians that this is the right deal,” he added.

A year ago, the FARC declared a unilateral ceasefire. While this was broken a couple of times the government halted offensive actions. The armed conflict, which lasted more than fifty years, has killed 220,000 people and displaced more than six million.

While recent polls show the deal would win enough support in a plebiscite—expected to be held in October—Schechter said the next challenge facing the government would be to double down on development projects in parts of Colombia that have been off limits as a result of the war.

The United States, which through Plan Colombia provided critical military assistance to help the Colombian government degrade the FARC, also has a crucial role to play: it must shift its attention to helping with development and reintegration, said Schechter.

Peter Schechter spoke in an interview with the New Atlanticist’s Ashish Kumar Sen. Here are excerpts from our interview.

Q: The Colombian government and the FARC have agreed to a peace deal. What’s at stake?

Schechter: At stake is the future of Colombia. Colombia is a country that has shown its capacity for massive transitions. Already, over the last twenty years, Colombia has transformed from being a country that was on the brink of the abyss of criminal gangs and violence and guerrillas to one of the most successful countries in Latin America; successful not just economically, but politically as well.

Colombia is a country that has consolidated its democracy and found enormous entry points for civil society. And so this transition would be, in a way, one of the most important final chapters of Colombia’s walk into the future.

The peace agreement ends the longest civil war in the region and would enable future Colombian governments to gradually move to develop areas of the country that were previously off limits to state authority and investment. The peace deal has huge consequences and would be an enormously important thing for future generations of Colombians.

Colombia, after Chile and Mexico, is the next Latin American country to join the Organization for Economic Co-operation and Development. The OECD is often misnamed as the club of rich countries, but as the OECD itself says, it is a club of countries that follow the rules. Colombia’s entry, planned for 2017, is an exclamation point to the notion that Colombia has transformed itself in the last twenty years. It really shows the praise that is due Colombia for determining what direction it should go: maintaining democracy, deciding on an open economy, opening up its trade regimes. It is the third Latin American country to enter the OECD. That is an accolade for Colombia.

Q: What are the main challenges to the implementation of the peace deal?

Schechter: There are many challenges. First, once the accords are signed, President Santos has promised that he would put this to a plebiscite so that the Colombian people can approve it. It is not a done deal. There is a lot of work to be done to convince the Colombian people that this is the right thing. The first challenge is to win the plebiscite.

There has been an enormous and very emotional opposition led by former President Alvaro Uribe that has basically said that this peace deal is far too generous for people who have murdered and destroyed at the length and breadth that the FARC has done over the past forty-five years. This is an argument that has Colombians in a twist. Everybody wants peace, but not everyone is sure that this peace deal is the right peace deal. It would be up to the president and a lot of independent voices to convince Colombians that this is the right deal.

If that happens and the plebiscite is won then the next hurdle is to massively consolidate Colombia’s focus on developing areas of the country through quality education and infrastructure projects, and the reintegration of guerrillas. There is a lot of work to be done to put the country through reintegration and economic development. None of this can happen without the support of Colombia’s international friends and partners. There is a huge role that the United States could and must play because the United States was so important during the days of Plan Colombia begun by President [Bill] Clinton and finalized by President [George W.] Bush. The United States was a real partner with Colombia in pacifying the country and reducing the FARC’s ability to do damage. The reason the FARC are at the negotiating table is because they are deeply degraded. We now have to turn from specific military help to really trying to develop and integrate whole new swathes of the country into Colombia’s economy.

Q: The question of transitional justice has been a sore point in the negotiations. Have these concerns been satisfactorily addressed?

Schechter: The point of transitional justice is very much the nub of the argument that President Uribe makes that this is a too generous deal. President Santos has responded that each and every one of the FARC leaders will have to respond to his or her crimes. Each and every one will have to go publicly to a tribunal that is especially designed to bring the truth out and to render some type of reparation to the victims. Former combatants who don’t confess to their crimes in their entirety will face up to twenty years in jail. How much actual jail time FARC members get is yet to be seen.

There is a complicated system here that really has not yet been put into practice. Colombians will have to feel that justice is being done. If there is a sense of impunity, then this thing breaks down. It is really walking on a knife’s edge where you are trying to show that the system is tough and demands concessions and openness, and there is sufficient punishment, but it also has to be open enough that reintegration actually happens.

Q: What are the terms under which the FARC leaders can participate in domestic politics?

Schechter: The announcement expected today will likely make it clear whether they will immediately have some seats in congress or whether they can participate as observers for a while and then actually be elected.

There is a process for FARC leaders to return to civil society. They have to confess their crimes and be tried by special tribunals. Once that happens and once they have been sentenced there is a capacity to run for office. This is perhaps the second-most controversial thing in the agreement, which is that the FARC leaders, after confessing and going through the judicial system that has been agreed to, will have the ability to run for office. Whether anyone votes for them is an open question in my mind. I am not convinced that they will be at all successful.

There are Colombians that legitimately say these people should be forever barred from office because they wanted to violently overthrow the government. They are not democrats; they don’t believe in democracy. I actually think that they will be beaten at the ballot box.

Colombia has had previous experience with reintegration of former guerillas and allowing them to run for office. The M-19 guerilla movement—an urban guerilla movement, as opposed to the FARC, which is a rural guerilla movement–was famous for having taken over the ministry of justice and was the cause of numerous deaths, but they were integrated and went through tribunals and today a former M-19 leader, Antonio Navarro Wolff, is a senator who is hugely respected, has enormous influence as a real straight shooter, and is somebody who has contributed to democratic dialogue. So Colombia has had good recent experience with the notion of the reintegration of guerrillas.

Q: The government is, meanwhile, at war with the ELN (National Liberation Army) and smaller drug trafficking gangs. Do the prospects of ending those smaller conflicts improve with a peace deal with the FARC?

Schechter: I think so. This is one of those things where with the FARC out the ELN is a much smaller force concentrated in a much smaller area of Colombia. They have also been degraded over the last ten to fifteen years. Should they decide that they do not want to come to the negotiating table, they will be a military nuisance. I am not saying they won’t cause damage or injury, but they are not a real threat the way the FARC was a real threat. I think the ELN will have difficulty lasting alone for a long time. The ELN and the government are currently in exploratory peace talks. One hopes that they would come to the negotiating table too, but if they don’t they face the notion of being destroyed militarily.

Ashish Kumar Sen is deputy director, communications, at the Atlantic Council. You can follow him on Twitter @AshishSen.