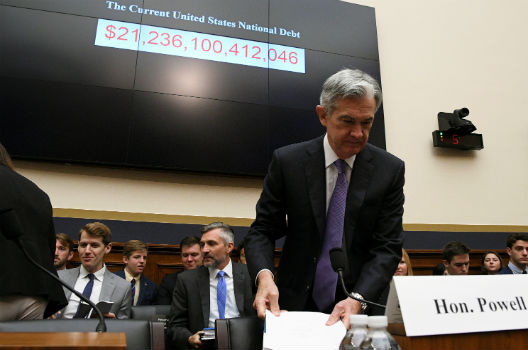 Mr. Powell struck a cautiously optimistic tone, defending the current path of gradual rate increases. Market reaction was muted, with the dollar declining slightly following the dovish remarks. But while many are focused on the strength of the US economy, the current fragility of the global economy could eventually derail Powell’s hopes for a gradual draw down of interest rates.

The Fed’s strategy hinges on the sustained growth of the US economy, which so far is happening. Gross domestic product (GDP) grew at a strong 4.1% on the second quarter of 2018 and is expected to continue at a similar pace in the current quarter. Inflation has attained the Fed’s goal of 2% and there are some initial signs of increasing wage pressure. Unemployment is below 4%, which is considered close to full employment. These conditions support the moderate optimism that the Fed has displayed so far, but several factors could get in the way.

First, Fed officials described rising trade tensions as “consequential” in their last meeting and a major escalation could have severe effects on the American economy. On Thursday, the United States imposed 25% tariffs on additional $16 billion worth of Chinese products, which China has vowed to match by a similar amount. Combined with previous rounds, the United States and China have already imposed tariffs on about $100 billion, or approximately 20% worth of their mutual trade. US President Donald J. Trump has said he was considering further increasing the range of goods covered by tariffs to around $200 billion of Chinese imports. He even threatened to “go to 500,” that is, to impose tariffs on all Chinese imports, which stood at around $505 billion last year.

Trade tensions are also heightening between the United States and the European Union (EU), Canada, and other countries. As we argued in June, the escalation of trade disputes is unlikely to end any time soon, as President Trump feels validated by a robust economy and a strong dollar, while retaliatory measures by other countries seem to have very limited domestic political impact so far. With no off-ramp in sight, a full-blown trade war will be costly, even if effects are slow to materialize. A recent projection from France’s Central Bank estimates losses of almost 3% of global GDP in the advent of a worst-case scenario.

Second, while the United States enjoys a solid footing and a strong dollar, certain sizeable emerging markets have shown signs of fragility, most recently evidenced by Turkey’s currency crisis. Argentina as well faced difficult times earlier this year, having to resort to the International Monetary Fund (IMF) for a $50 billion emergency loan. Research from the Bank for International Settlements (BIS) has shown ways in which a strong US currency tends to cause financial instability and eventually dampen economic activity in emerging markets. As the Fed continues to rise rates, shoring up the dollar and attracting capital flows to the United States, vulnerabilities from those emergent markets dependent on dollar funding will increase. The Turkish crisis of recent weeks seems contained at the moment, but the fundamental policy imbalances underneath have not been addressed, setting up the stage for another round of market jitters at some point. While other emerging economies have shown little signs of contagion, similar weaknesses could surface elsewhere, drawing parallels to the Asian financial crisis of 1997, which had lasting impact on the global economy.

Finally, Italy has been drawing increased scrutiny in recent days as foreign holdings of Italian debt declined by a record €38 billion in June, in a sign of investor’s concern over the country’s fiscal position and growth prospects. Outward capital flows of this magnitude have not been seen since the height of the sovereign crisis that hit southern European countries particularly hard in 2012-2013. As foreign investors leave, domestic financial institutions pile up their holdings of Italian public debt, eventually leading to dual public and private debt crises. This is what observers of the euro crisis have since dubbed “the doom loop”. A similar mechanism seems to be in the early stages again, with some caveats.

Notably, the tools at the euro-area level to fight this sort of “diabolic loop” have been greatly improved after an effort by the European Union to reinforce its economic government institutions. These include the European Central Bank’s (ECB) ultra-loose monetary policy of Quantitative Easing (QE), as well as the solidification of the European Stability mechanism (ESM) as a lender of last resort with enough firepower to short-circuit the “doom loop” and prevent contagion. Better oversight of the financial sector is also in place, and experience in dealing with these types of disruptions has increased. It is also worth noting that the Italian financial system is in much better shape, with the stock of bad loans, or Non-Performing Loans (NPLs) dropping substantially over recent years.

But some investors see reasons to worry. Italy has experienced anemic growth for several years with little improvement on the horizon and holds a large public debt of more than 130% of its GDP. Moreover, the ECB’s Quantitative Easing is set to start (gradually) winding down, while the firepower of the ESM will most likely not be enough for a large country like Italy. There are also questions about leadership of the current coalition in power, which is preparing a more expansionary budget that includes significant tax cuts and additional spending measures.

The US economy is in good shape, but developments overseas should not be underestimated.

Álvaro Morales Salto-Weis is a Program Assistant in the Atlantic Council’s Global Business and Economics Program. You can follow him on Twitter @alvarosaltoweis.