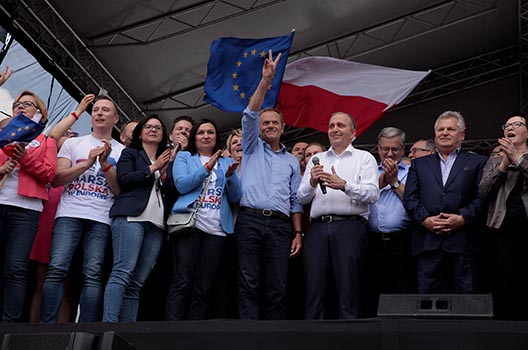 The European parliamentary elections in Poland, which are expected to draw a record turnout, will set the stage for national parliamentary elections in the fall. The election will be a vote of confidence in the ruling Law and Justice (PiS) party and reveal the level of public support for two competing visions for the future of Europe: an integrationist, open, and solidarity-driven Europe or a conservative “Christian” Europe of sovereign states.

The European parliamentary elections will take place in Poland on May 26. There are currently fifty-one seats reserved for Polish Members of the European Parliament (MEPs), with candidates selected from thirteen electoral districts.

Overall, twenty-nine electoral lists (komitety wyborcze) have been officially registered with Poland’s state electoral commission, but only six—the European Coalition, Law and Justice, Spring of Biedroń, Kukiz’15, Confederacy KORWiN Braun Liroy Nationalists, and United Left—meet the requirements to field candidates in all thirteen districts. Of these six, the European Coalition and the Law and Justice are driving the debate.

The European Coalition (Koalicja  Europejska) is by far the biggest and most diverse bloc of pro-Europe parties. It is composed of all the major opposition groups in Poland, including the previously ruling Civic Platform (PO) and agrarian Polish People’s Party (PSL), the Social-Democrats (SLD), the liberal Nowoczesna or Modern Party (N), and the Greens. In the European Parliament, these parties belong to the traditional pro-European mainstream: PO and PSL to the European People’s Party, SLD to the Party of European Socialists, Nowoczesna  to the Alliance of Liberals and Democrats for Europe (ALDE), and the Polish Greens to the Greens.

The Law and Justice (Prawo i Sprawiedliwość, PiS) electoral list represents the national-conservative political party that has governed Poland since 2015.  As a member of the Eurosceptic European Conservatives and Reformists Group, PIS opposes many efforts to strengthen centralized European institutions at the expense of member state control, but also calls on Europe to return to its Christian roots

The other four electoral lists play a smaller role in the Polish European elections. The Spring of Biedroń is a newly established social-democratic, pro-European political party with a focus on equality, women’s rights, separation of state and church, and bringing the European Union (EU) closer to the citizens. The Kukiz’15 is a far-right alternative to PIS in the Polish Parliament. The Confederacy KORWiN Braun Liroy Nationalists gathers ultra-right, nationalistic parties with strong anti-migration rhetoric, while United Left represents the far-left, pro-trade union parties. Apart from Kukiz’15, the parties behind the three other electoral lists are not currently represented in the Polish Parliament.

Given the proximity of the EU elections to the Polish parliamentary elections in the fall, much of the campaign has focused on national issues (social spending, health care, education reform, etc.) There are, however, three major questions with a strong European dimension:

Poland’s Place in Europe: More than 80 percent of Poles support Poland’s membership in the EU. The European Coalition argues that PiS has effectively destroyed Poland’s position within the EU by attracting strong criticism from Brussels of reforms in Poland. This specifically concerns judicial reform, which has resulted in the initiation of the rule-of-law procedure by the European Commission: Article 7 of the Treaty of the EU. Article 7 is enacted when the EU identifies a member as having persistently breached its founding values. It can deprive the member state of voting rights in the European Council. The triggering of Article 7—action taken against Poland in December 2017 was the first time the article has been triggered in the EU’s history—as well as a number of other infringement procedures launched by the European Commission have weakened Poland’s credibility and negotiating position within the EU. The European Coalition has warned voters that if PiS remains in power it will continue its “illiberal” agenda, making “Polexit”—a Polish exit from the EU—a real possibility. This strategy has proven only partly effective, especially as PiS has more recently adopted friendlier rhetoric toward Brussels, stressing that Poland is and will remain part of the EU. At the same time, unlike the pro-European opposition (the European Coalition and Spring of Biedroń) PiS has opposed abandoning the Polish zloty and adopting the Euro. Although Poland is obliged under its EU accession commitments to join the eurozone at some point, a majority of Poles support the PiS approach.

What kind of Europe? The electoral debate is largely about identity. PiS wants a Europe based on Christian and family values, assuring voters that it will not allow an “ultraliberal” gender, LGBT, and multiculturalism agenda to dominate in Poland. This view is shared by the Confederacy KORWiN Braun Liroy Nationalists, which is campaigning on a strongly anti-immigration platform. The Spring of Biedroń takes the opposite position to PiS, underlining the need for Poland to open up to European values of equality, diversity, and tolerance. The European Coalition tries (not always successfully) to strike a middle ground in order not to alienate its more conservative voters. The debate has, however, taken a new twist with the release of an explosive online documentary on pedophilia in the Polish Catholic Church. As a result, discussion on the Catholic Church’s role in Poland might dominate the final weeks of the electoral campaign. This will pose a significant challenge to the PiS, which is closely associated with the Polish clergy.

What about the money? Poland has thus far been the largest beneficiary of support from the EU Cohesion Fund, which provides support to the poorer regions of Europe. This will, however, change in the next EU financial framework—especially in light of the withdrawal of the United Kingdom from the EU (which will shrink Brussels’ budget) and changing priorities for EU policymakers (security and innovation, for example). How much Poland receives from the Cohesion Fund will depend, among other factors, on its negotiating abilities. Although Law and Justice claims it will negotiate the best deal (especially for Polish farmers), it is the European Coalition which has a much stronger standing inside the European Parliament and within EU institutions. It also has two of the leading European parliamentary negotiators on the next EU financial framework on its ballot: MEPs Janusz Lewandowski from Gdańsk and Jan Olbrycht from Katowice.

What Do the Polls (and Poles) Say?

The other parties are expected to win support in single digits: Spring of Biedroń at 6 to 9 percent, Kukiz’15 at 5 to 6 percent, the Confederacy KORWiN Braun Liroy Nationalists at 3 to 5 percent, United Left at 1 to 3 percent. Parties need to win 5 percent of the vote to be awarded seats in the European Parliament.

Why Does it Matter?

The EU elections in Poland will probably matter more than in most EU member states. They are a testing ground for all parties, preparing them for the parliamentary elections in the fall. The results could either make or break the European Coalition of opposition parties ahead of the national electoral contest. The elections could also consolidate or undermine the position of the ruling PiS. With a record-high 60 percent of voters declaring they will vote on May 26, it will ultimately be a vote of confidence in the government. That will have an impact on the results of the fall elections—arguably the most important ballot since 1989, as it might set Poland on an even more populist and conservative trajectory in the years to come.

Katarzyna Pisarska is director and founder of the European Academy of Diplomacy in Poland. She is also the program director of the Warsaw Security Forum, an associate professor at the Warsaw School of Economics, and a Young Global Leader and Expert of the World Economic Forum in Davos. Currently she is a visiting scholar at the University of Southern California Center for Public Diplomacy in Los Angeles. Follow her on Twitter @KPisarska.