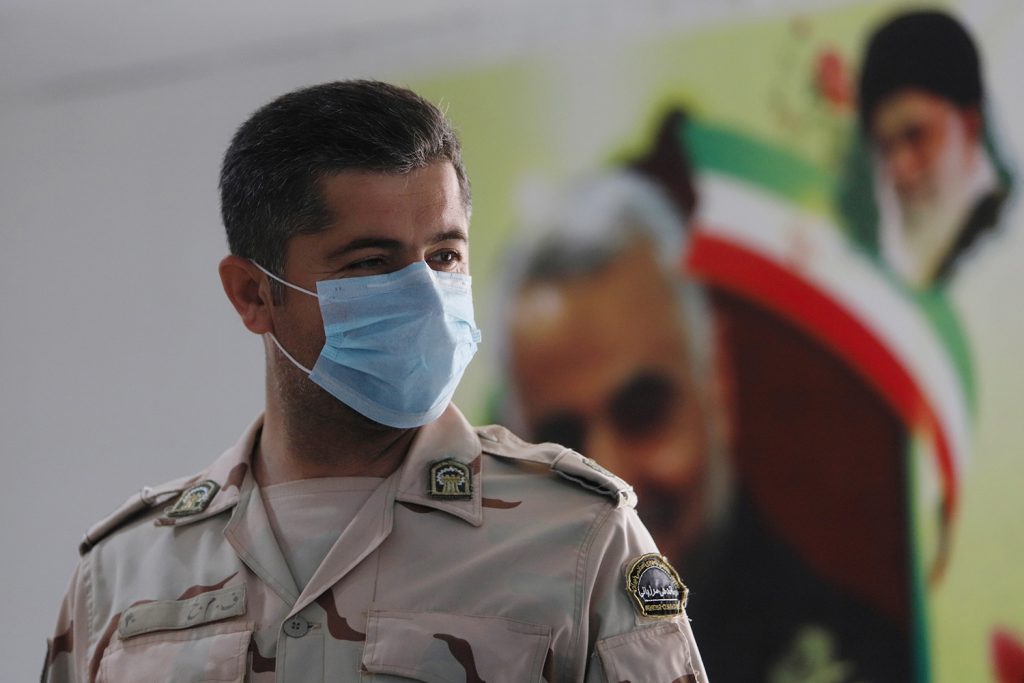 A member of Iranian Border Guards wears a protective face mask, following an outbreak of the new coronavirus, inside the Shalamcha Border Crossing, after Iraq shut a border crossing to travellers between Iraq and Iran, Iraq March 8, 2020. REUTERS/Essam al-Sudani

While the world is focused on the spread of a pandemic, the conflict between Iran and the United States is heating up. Without the laser-focused media attention of early January to temper the actions of both sides, we can expect to see riskier behavior and less concern for collateral damage.

In the case of the United States, this expectation is mitigated by the fact that every decision a president makes is meticulously analyzed in an election year. His political advisers will weigh the impact of any strike he approves on his chance for reelection, and these advisers know that current US sentiment does not support starting a full-fledged war with Iran.

In the case of Iran, the risk is high that a regime facing what must look like an existential threat in the form of a virus will be more venturesome.

In fact, the March 11 and March 14 strikes on Camp Taji may have been a distraction tactic, intended to demonstrate strength at a time when the inner circles of Iran’s political elites are beset with COVID-19 and the supreme leader is understandably being isolated to protect him from the virus.

Iran’s health ministry offers conflicting explanations for the virus entering the country, with one official reporting that the virus arrived via Chinese workers building a solar plant, while another blames illegal immigrants from neighboring countries. While suspicious, this would not make Tehran the first government to issue contradictory statements about a fast-moving crisis. A rumor spreading among Iranians—but not reported by state-owned Iranian news—says that the virus was brought to Qom by one of the many Chinese travelers who come to the shrine city to take advantage of the practice of temporary marriage. This practice amounts to clerically sanctioned prostitution and is not supported by much of Iran’s public.

Iran watchers within the political ranks of the US administration, while not reveling in the impact on public health in Iran, do believe that mismanagement of the virus will exacerbate public discontent with the regime’s disregard for effective governance, mis-prioritized spending, and lack of a vision for growth.

While this heightened discontent chips away at the already low public opinion of the regime—following the downing of a Ukrainian airliner and on the heels of years of corruption and high unemployment—it will not overthrow it.

According to an office in the US government that keeps a close eye on Iran, Supreme Leader Khamenei’s son Mujtaba is effectively calling the shots, supported by the Islamic Revolutionary Guard Corps (IRGC)’s intelligence chief. If his father passes, Mujtaba will likely deploy IRGC units throughout the country while staging a “Weekend At Bernie’s” before allowing news of his father’s death to be announced. Should the inexperienced and, for now, unaccountable Mujtaba maintain this command and control, we can expect increased bravado from Iran at the expense of Iraqis, Syrians, Yemenis, along with counter-Islamic State coalition forces.

Experts with contacts among Iranian elite posit that the more likely successor to take the helm will be jurist Ebrahim Raisi, long expected to step in as the next supreme leader. In this scenario Mujtaba Khamenei would not be absent, but in the background.

The Hail Mary attempt by the Iranian regime (and their Chinese partners) to pin the spread of the virus on a bioterror attack by the United States is evidence of a desperation to salvage domestic support that could lead to more risky behavior by the regime, and an even lower regard for civilian casualties where their proxies operate, as flagrantly displayed on March 11. However, US policymakers should pay attention. The conspiracy theory sounds laughable in Washington, but it has some traction in the Middle East, where Chinese government officials are repeating it to their Gulf government counterparts.

Two second-order effects of this existential threat to the regime in Tehran could look like an unexpected bonus to Iran-watchers in the US administration.

First, the possibility that Israeli scientists have developed a vaccine for COVID-19.

Iran has been advised from most angles to accept assistance from Israel if it is offered. So far, according to the Iranian Hamdeli newspaper and reported in the Israeli press, at least one cleric in Iran has argued that Iranian lives should not be sacrificed just because the source of a solution is Israel. And this has not garnered the sneers from Shi’a that another cleric’s solution involving violet oil applied to the nether regions has.

The possibility that there might be Israeli-Iranian cooperation on a national level would have seemed like a pipedream a year ago.

The second is the likelihood that the door has now slammed shut on the regime’s options for foreign direct investment.

Chinese citizens living in Iran are already culturally isolated from their local neighbors. The Wuhan origination of the virus has amplified this into a stigma that will mean Tehran will risk popular outrage if they sign new contracts that involve planeloads of Chinese laborers arriving in Iran. With Tehran under sanctions, China is the sole economic machine willing to conduct business with Iran, so finding alternative sources of investment in Iranian infrastructure projects will be nearly impossible. This additional economic debacle—entirely of China and Iran’s own making—will have the steadfast authors of the US Iran strategy dancing.

While this pandemic could create new bridges between the health and humanitarian communities of Iran and its adversaries, it will not result in a shift in US policy toward Iran. Defenders of the policy point out that sanctions have excluded medical equipment and medicines from the beginning, and argue that the impact of the coronavirus in Iran is exacerbated not by sanctions, but by the regime’s own governance failures. Add to that the likelihood of additional attacks on Al-Asad Air Base and the US Embassy in Baghdad in the near term. The United States has not yet responded to the March 14 militia strike on Camp Taji. But it will. And since the careful effort to respond to the rocket attack on March 11 with measured strikes on militia-run logistics hubs was not an effective deterrent, it is likely that the next move by the United States will be more decisive.

The effort that will not be expended in the halls of the US government to draft an entirely new strategy could instead be put toward planning for the new coronavirus contingency. How should the international community respond if the virus culls the senior ranks of the regime and creates a momentary crisis of legitimacy in Iran? This question needs to be asked in capitals. What is the international community’s threshold for getting involved? What are the costs of doing so? What are the costs of not?

Kirsten Fontenrose is director of the Scowcroft Middle East Security Initiative at the Atlantic Council. She previously served in the Trump administration as senior director for Gulf Affairs at the National Security Council.

COVID-19: The latest shock to a battered Iranian system

How many shocks can a political system absorb and still remain in power?

Why Trump should trigger NATO’s Article 5 vs. COVID-19

If NATO could bend Article 5 to combat a non-state terrorist actor striking the United States, why not also to combat COVID-19. Given current transatlantic divisions, there is far greater need now than after 9/11 for a symbolic gesture of unity.

The impact of coronavirus on Gulf economies

Beyond the obvious public health crisis, the coronavirus has had a significant impact on Gulf economies, as it has with other countries around the world. What sets the GCC states apart is the damage that can be done by a Chinese slowdown.