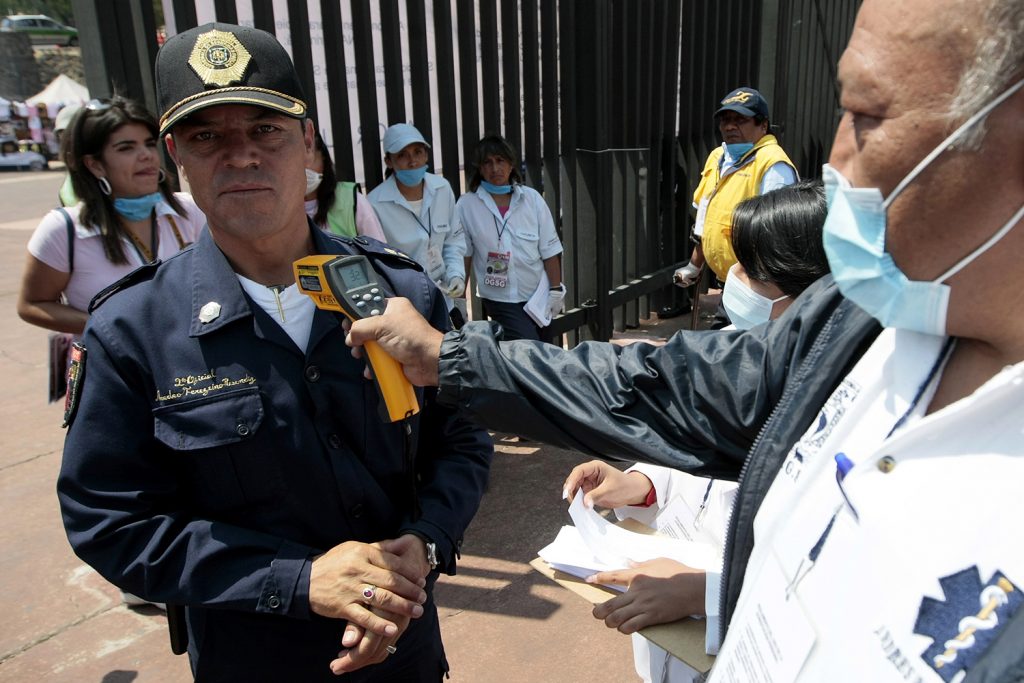 A doctor (R) uses a thermal scanner, which shows the heat signature, on a policeman to combat influenza A (H1N1) before entering the University stadium during the team's Mexican league championship soccer match between Pumas and Monterrey in Mexico City, May 10, 2009. REUTERS/Henry Romero

In early April 2009, several cases of “atypical pneumonia” were reported in Mexico City, caused by influenza type A, sometimes called the swine flu and denominated as A(H1-N1). While the A(H1N1) and novel coronavirus (COVID-19) crises are different in magnitude and were caused by viruses with different levels of lethality, Mexico’s experience with the A(H1N1) can offer valuable lessons for current disruptions.

On March 23, Mexico officially entered phase two of COVID-19’s outbreak, which means that the virus is now locally spreading and not imported from other regions. In response, the current administration is taking measures such as releasing public funds to enhance the National Defense Plan III (DN-III)—which allows the use of military assets against natural disasters—credits for small businesses, and agreements with the private sector to alleviate effects on workers. During the COVID-19 crisis, it is important to look back on the A(H1N1) experience.

The 2009 A(H1N1) pandemic had devastating economic implications in Mexico, just as COVID-19 is having on the global economy. In 2008, Mexico’s gross domestic product (GDP) grew by 1.44 percent. A year later—after the A(H1N1) crisis—its GDP growth fell to -5.44 percent. Moreover, the A(H1N1) outbreak coincided with the effects of the 2008 financial crisis, when Mexico lost a significant amount of exports to the United States. Both events contributed to a tough year for the Mexican economy and a report from the Economic Commission for Latin America and the Caribbean (ECLAC) estimated that the A(H1N1) outbreak triggered $9.1 billion in losses. Ninety-six percent of that amount was due to lower production and consumption of goods and services, while the remaining 4 percent accounted for the expenses to address the crisis. The cost of the pandemic was estimated at 1 percent of Mexico’s GDP in 2008.

The A(H1N1) outbreak particularly impacted tourism—an important component of the Mexican economy due to its magnitude and its importance as a source of foreign currency; the tourism industry lost an average of 80 percent of its sales. After the first weeks of the quarantine, 90 percent of the country’s hotel and transportation reservations were canceled, along with 290 cruise ship arrivals. It was estimated that in 2009, Mexico lost $3.4 billion from touristic activities due to the pandemic. The most affected sectors after tourism were commerce and transportation with $3.2 billion and $1.2 billion in losses respectively.

Despite the economic sacrifice, Mexico was instrumental in containing the virus, and the World Health Organization (WHO) praised Mexico’s response for its international cooperation, its effective management of the crisis, and its transparency. For example, Mexico created an effective risk communication plan, launched a health promotion campaign, took measures to guarantee the supply of healthcare goods—including the reinforcement of a strategic stockpile—and promoted research and development.

Former President of Mexico Felipe Calderón wrote in his memoirs that government officials feared that the A(H1N1) could have had the lethality of avian influenza: around 60 percent. By early April of that year, Mexico City—then with 22 million inhabitants and a population density of approximately 5,900 inhabitants per square kilometer—had become the outbreak’s epicenter. A slow response to a virus with those levels of lethality would have been catastrophic.

On April 17, the Mexican government decided to act rapidly, issuing an epidemiological alert across the country. A few days later, all events that gathered large groups of people were canceled for at least thirteen days. In a country where more than 58 percent of the workforce depended on the informal economy, the measures threatened not only to devastate the economy, but cause tremendous social upheaval.

Macroeconomic policies in response to A(H1N1)

To mitigate the economic harm, the Mexican government responded with a set of fiscal measures, reducing business and individual taxes, cutting social security rates for workers, sending tax rebates of 25 percent to hotels and restaurants, discounting 50 percent of taxes for using airports and ports, creating a special fund for tourism promotion in coordination with state governments, and increasing financing for small and medium enterprises (SMEs).

In the following years, the Mexican economy recovered, growing by 5.1 percent in 2010 and an average of 3.2 percent from 2010 to 2015. Although many factors caused the recovery, sound government policies to mitigate the shock were paramount.

There are at least four measures taken by Mexico during the A(H1N1) outbreak that are worth recalling for the COVID-19 crisis. First, international collaboration to conduct scientific analysis on samples, establishing protocols, and preparing for a more extended pandemic, is crucial.

Margaret Chan, then director-general of the WHO, mentioned in a high-level meeting on A(H1N1) in Cancún that “Mexico gave the world an early warning, and it also gave the world a model of rapid and transparent reporting, aggressive control measures, and generous sharing of data and samples.” It is worth highlighting cooperation between North American countries, Chan acknowledged, explaining that “Canada and the United States supported the early control measures in Mexico, and then followed this model of transparent reporting and generous collaboration as their outbreaks began to spread.”

Second, as argued by José Córdova—then-secretary of Health—the Mexican government was right to follow the National Preparedness and Response Plan for an Influenza Pandemic, a multisectoral plan established in 2003, anticipating an influenza outbreak under various scenarios. This plan was issued after the Mexican government included health security as a component of its national security doctrine and was developed by a high-level working group that included the secretary of National Defense and the secretary of Navy. The plan contained a multisectoral operating strategy with specific actions for each institution. By following this plan, the Mexican government signaled institutional coordination and maturity, which can provide order and certainty in times of crisis.

Third, a willingness to provide Mexican citizens with the best information available—and on time. By publishing statistics about the A(H1N1) outbreak, the Mexican government earned society’s trust, which allowed a responsible social reaction during the quarantine. Although criticisms have been made about overreaction, the Mexican government acted on the side of caution with the available information.

Finally, after managing the outbreak, the government implemented a series of targeted measures to stimulate affected economic sectors—especially tourism and SME’s.

In times of uncertainty, it is important to turn to historical experiences and critically evaluate what others did. Although the A(H1N1) and COVID-19 are different crises with different effects and scale, recalling previous experiences is illustrative. In 2009, Mexico erred on the side of caution, and while this generated criticism, it also showed how a responsible actor limited what could have been a much wider human and economic shock.

Pablo Reynoso Brito is a program assistant with the Atlantic Council’s Adrienne Arsht Latin America Center, where he focuses on Mexico.

How the coronavirus will impact Panama’s economy

What does the coronavirus mean for Africa?

Will the novel coronavirus prove even more deadly and disruptive in Africa? It depends on the country. Bronwyn Bruton identifies the key questions and sets the stage for the Africa’s Center’s ongoing commentary on the crisis.

What Latin American countries are doing to confront coronavirus