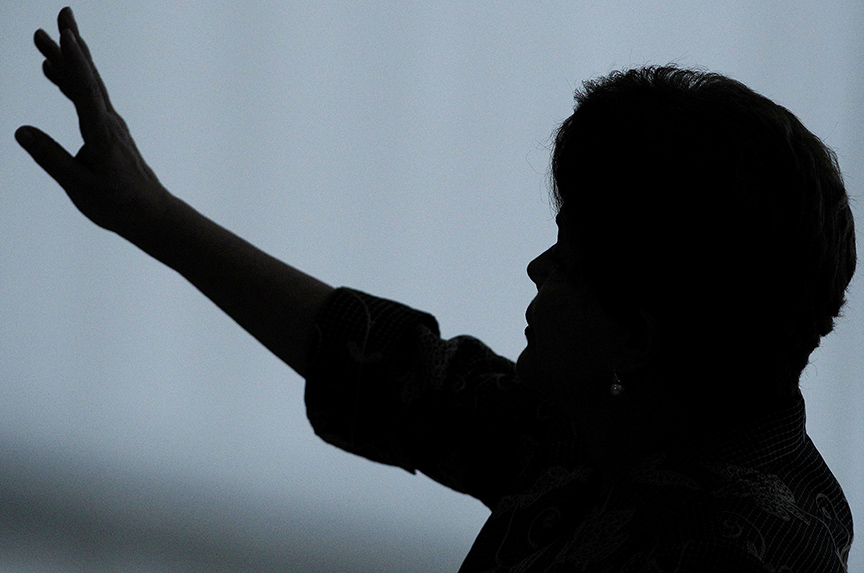 Brazilian President Dilma Rousseff, seen here in silhouette in this 2011 photo, was impeached by the Senate on August 31. (Reuters/Ueslei Marcelino)

Brazil’s Senate on August 31 impeached President Dilma Rousseff, the country’s first female president, on the grounds that she had manipulated the budget to conceal growing economic problems.

Jason Marczak, director of the Latin America Economic Growth Initiative at the Atlantic Council’s Adrienne Arsht Latin America Center, discussed the implications of the impeachment for Brazil’s democracy, economy, and politics in an interview with the New Atlanticist’s Ashish Kumar Sen. Here are excerpts from our interview.

Q: Was it hypocritical of the Brazilian Senate, where many of the senators are being investigated for corruption, to impeach Dilma Rousseff for what were, at the end of the day, technical violations of budget laws?

Marczak: Dilma was impeached on charges that she illegally moved funds between different accounts in the national budget. This is something that has been done in the past by previous presidents, but the concern here is that she did this to a greater magnitude than any of her predecessors and that she specifically did this to cover up shortfalls in the budget to make the books look better in the lead up to her election.

This impeachment was due to these budget maneuvers, but it was also very much a result of her lack of political support. If the economy was growing at a fast pace and she was politically more popular, the charges under which she was impeached might have been overlooked.

Q: Is Brazil’s democracy in trouble?

Marczak: As we said in a recent Atlantic Council report, democracy is thriving in Brazil. Democracy is at a point of renewal in fact. Brazilians overall are fed up with the political class, with the impeachment process that has been ongoing since December of 2015, with the senators and deputies of which about sixty percent are under some type of investigation. They are fed up with the state of the economy and the general political paralysis that they see.

Politically, it is an opportunity for new actors to come onto the scene and for the political class to potentially be expanded to better incorporate the voices of the people.

Q: What steps does the government of President Michel Temer need to take to fix the economy?

Marczak: The first thing that will help the economy is a political resolution. The fact that Brazil has been in political limbo for almost nine months has prevented the government—whether it was the Dilma government or that of acting President Temer—from making economic reforms.

However, since Temer came into office in May he has started to move forward on certain reforms that will be critical to moving the country forward. He espouses a more outward-looking economic model. He recognizes that economic growth will come from trade and greater commercial engagement. Brazil has historically been an incredibly closed economy. Dilma was forced at the end of her term to look for ways to open economic opportunities with other countries. But this was for her more out of necessity than ideology.

There are labor, pension, fiscal, and energy sector reforms that are critical. Brazil’s energy sector is on the verge of taking off. The problem is that foreign oil companies have been reluctant to invest because of the joint operatorship requirements with the Brazilian state oil company Petrobras. There is a bill moving through Congress right now that would scale back some of those terms to incentivize foreign companies to invest, with the greatest potential boom in the pre-salt fields off Rio.

Brazil is slightly hobbled by the inward-looking approach of the regional trade bloc, Mercosur, but now with President Temer, who has a greater outward economic orientation, as well as with President [Mauricio] Macri in Argentina, the two major powers of Mercosur now recognize the importance of greater engagement with the Pacific alliance—the other major economic bloc in the region—but also with the global economy.

Q: What are the broader implications of the Lava Jato corruption probe on the ability of the government to function and move forward with reforms?

Marczak: The Lava Jato investigation will likely wrap up by December. One effect is that foreign businesses continue to rethink their investments in Brazil because they just don’t know if a potential partner will one day be arrested or questioned as part of the investigation. A resolution to this will give greater certainty to investment.

At the same time, Lava Jato very much shows the strength of the Brazilian judiciary. There are very few countries in the world where the judiciary can go after top businesspeople and politicians and not have their actions scaled back.

A hopeful long-term repercussion of the Lava Jato investigation is that it is changing the way business is done. For many, bribes have historically been a part of doing business. This investigation is raising awareness that this can no longer be the modus operandi.

Q: Temer himself faces corruption charges. Politically he is accused of stabbing Rousseff in the back. Do you expect him to last out his term?

Marczak: Temer will survive the remaining two years of this presidential term. Brazilians are exhausted. There is very little appetite to engage in another leadership change or to launch another impeachment process. The top priority for Brazilians right now is to get their economy reinvigorated.

The charges against Dilma were based on constitutional violations, but also very much based on politics. Temer is not a popular president, but he is much more popular than Dilma was at the end. The focus right now is how do we move on? His big challenge will be: how to maintain political coalitions in both the Senate and the House in order to move forward his agenda?