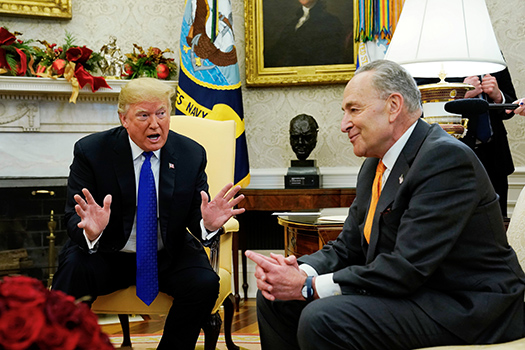 US President Donald Trump talks with Senate minority leader Chuck Schumer (D-NY) as he meets with the Senate and House Democratic leadership at the White House in Washington, US, December 11, 2018. (REUTERS/Kevin Lamarque)

US President Donald Trump has an uncanny ability to divide both Americans and the United States from its democratic allies. The first two years of his administration have seen intense polarization within the United States and unprecedented slights against American friends around the world. Despite these divisions, the United States and its allies are more strategically aligned in grand strategy – endorsed by Republicans and Democrats – than they have been since 9/11, if not 1989.

Notwithstanding occasional feuds among our leaders, the United States and its democratic allies around the world agree that the great challenge of the 21st century will be the competition between the free world and authoritarian corrupt state-led capitalism, chief among them China and Russia. Even if President Trump periodically disparages an ally, US strategy will inevitably drive Washington to bolster and even expand its alliances in the coming years as it faces challenges from Russian President Vladimir Putin and Chinese President Xi Jinping. In an era of geopolitical competition, America’s friends and allies are the United States’ best competitive advantage.

From a quick look at current political rhetoric in Washington, it is easy to think that the United States is unable to agree on anything. The prospect of a Democratic-controlled House of Representatives at odds with the Trump administration casts doubt on the ability of Washington to speak with one voice for at least the next two years. Yet in Congress and across the executive branch there is no recognizable difference between Democrats and Republicans when it comes to the threats from Beijing and Moscow.

New geopolitical competition with Russia and China is the main theme of the Trump administration’s December 2017 National Security Strategy, which frames the foreign policy priorities for the executive branch. Although Trump has flirted with working with Putin, the Kremlin is viewed in Washington as an opponent. After Trump’s July Helsinki summit with Putin, Republican Senator Marco Rubio stated flatly that “the reality is Russia is an adversary…any approach not based on this will fail.” In a strong signal of support for the transatlantic Alliance during the contentious July NATO Summit, ninety-seven out of one hundred senators supported a resolution affirming Congress’ commitment to the Alliance, while a similar measure passed a unanimous voice-vote in the House of Representatives.

Even before Trump and Vice President Pence sharply criticized Beijing this fall, twelve senators including Elizabeth Warren, Sherrod Brown, Chris Coons, and six other Democrats wrote to the president in June to warn of Chinese influence campaigns in the United States and abroad. This year, Congress overwhelmingly approved the BUILD Act, Washington’s response to Beijing’s One Belt, One Road initiative, that will provide countries around the world with an alternative to China’s debt diplomacy. This bipartisan overhaul of the US approach to overseas development belies the image of Congressional gridlock.

The current tensions between Washington and its Allies in Europe, Canada, and Asia are well-documented, running from burden-sharing to trade. They are real. But these should not overshadow the shared strategic agreement between the United States and its friends that the great challenge is one we face together: the coming struggle between a free world and authoritarian state-led corrupt capitalism.

July’s NATO summit was at the same time among the most acrimonious and the most productive in recent history, bolstering the Alliance’s rapid reaction capabilities, hybrid warfare defense, and promising to extend the family’s reach into the southern Balkans. The Three Seas Initiative will secure crucial funding to allow Central European states to implement new North-South transportation and energy infrastructure, denting their dangerous reliance on Moscow-controlled East-West routes.

On China, the Asia-Pacific Economic Cooperation (APEC) summit in early November demonstrated the alternative Beijing provides to other Asian countries. Chinese officials torpedoed the draft summit statement for the first time in history and even had the local police called on their delegation when they tried to force their way into the host delegation’s offices. If the United States can pursue its Indo-Pacific strategy and use the BUILD Act to repair and strengthen American relationships in East Asia, the same shared strategic outlook that defines the transatlantic relationship can form a significant Pacific bumper to Beijing’s aggression. On November 20, the European Union also took a significant step to monitor and limit Beijing’s funding of infrastructure projects in Europe, mirroring growing concerns of China’s economic diplomacy amongst Latin American and African partners as well.

At the same time, unforced errors that unnecessarily divide Washington from its friends must be avoided, such as the short-sighted trade tactics that have now seen Europe and Canada join common cause with Moscow and Beijing at the World Trade Organization. A shared vision and continued Russian and Chinese aggression may lead the Trump administration to come around to limit its trade challenges to our adversaries rather than our allies as it concludes unnecessary division plays into the hands of Washington’s geopolitical competitors.

It may not seem like much at first, but this window of strategic unity is a rare achievement for the United States and its allies. Not since the days immediately after the terrorist attacks of 9/11 have Washington and its allies shared so identical a strategic view. Perhaps more importantly, the acceptance of Russia and China as the main geopolitical challenge of the 21st century leads to one conclusion: to meet this threat, Washington and its allies must act in unison. For all the rhetoric of America First, the United States cannot possibly hope to counter Beijing and Moscow alone. We have already seen what can happen when Moscow or Beijing engage in bilateral “negotiations” with their neighbors, using their power and leverage to extract concessions, to lock weaker partners in exploitative economic deals, or even to rewrite borders.

It is only the United States working with its allies and partners that can meet this threat. Thankfully, it appears that most of Washington’s partners are on the same page. For all the fears of a divided government and the realities of sharp partisan divides, Washington itself seems to be speaking with one voice on American strategy.