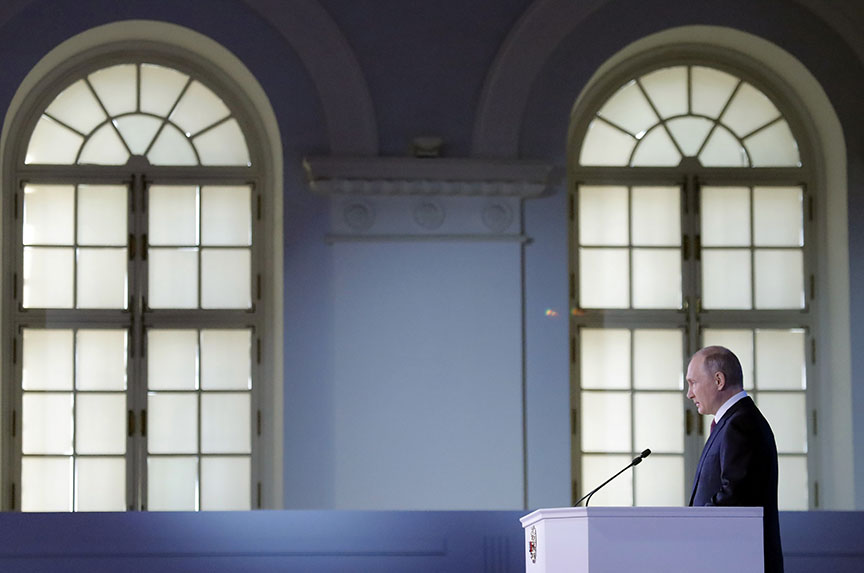 Putin used his annual state of the nation speech—delivered just weeks before the March 18 presidential election that he is guaranteed to win—to tout Russia’s military might.

Russia, he said, has developed a nuclear-capable, low-flying cruise missile that cannot be intercepted by existing air defense systems and submarine-launched, long-range missiles that are capable of delivering a nuclear warhead.

“One of them is creation of a small-size highly powerful nuclear power plant that can be planted inside the hull of a cruise missile identical to our air-launched X-101 or the United States’ Tomahawk, but at the same time is capable of guaranteeing a flight range that is dozens of times greater, which is practically unlimited,” Putin said, according to TASS, Russia’s state news service.

“A low-flying, low-visibility cruise missile armed with a nuclear warhead and possessing a practically unlimited range, unpredictable flight path and the capability to impregnate practically all interception lines is invulnerable to all existing and future anti-missile and air defense weapons,” he added. He said the missile was successfully tested late last year.

Putin said Russia had developed these missiles in response to the United States’ withdrawal from the 1972 Anti-Ballistic Missile Treaty signed with the Soviet Union. George W. Bush withdrew the United States from the treaty in 2001. Putin at the time called the US decision a mistake.

The Russian president also fumed at the Nuclear Posture Review released by US President Donald J. Trump’s administration in February.

The Nuclear Posture Review, which focuses on Russia and, to a lesser extent, on China, states that the United States “now faces a more diverse and advanced nuclear-threat environment than ever before, with considerable dynamism in potential adversaries’ development and deployment programs for nuclear weapons and delivery systems.”

“While the United States has continued to reduce the number and salience of nuclear weapons, others, including Russia and China, have moved in the opposite direction,” the review states.

“They have added new types of nuclear capabilities to their arsenals, increased the salience of nuclear forces in their strategies and plans, and engaged in increasingly aggressive behavior, including in outer space and cyber space,” it added.

Putin warned that any use of nuclear weapons against Russia or its allies would trigger a Russian response. But, he added, Russia’s military posture was defensive in nature.

“Russia still has the greatest nuclear potential in the world, but nobody listened to us,” Putin said. “Listen now,” he added.

Atlantic Council analysts shared their analysis on Putin’s latest bluster. Here’s what they had to say:

“This is pre-election braggadocio and more of the Russian nuclear saber-rattling that we’ve seen over the last several years.

“It’s dangerous and hardly reassuring to Russia’s neighbors or the United States. The danger here is the perception, or indeed the reality, that the Russian threshold for use of nuclear force is reduced.”

“Putin’s comments about an ‘invincible missile’ are chilling to say the least. More importantly, it highlights a problem that most observers overlook—the wider and more extensive utility of cruise missiles.

“While analysts have always focused on ballistic missiles, Putin’s statement underscores the challenges that cruise missile present. The capabilities of the Russian missile are not fully known. Details are sparse and we do not fully know the operational reliability of such a system. But the very idea is disturbing. It will have ramifications for nuclear stability. It also has the potential for wider proliferation concerns.”

“Putin’s announcement that Russia is developing new types of nuclear weapons never even dreamed of during the Cold War demonstrates the severity of the renewed Russian nuclear threat. Fortunately, as made clear in the Nuclear Posture Review released last month, the United States and its allies are beginning to strengthen our deterrent to deal with this challenge.

“Putin’s argument that these new types of weapons can beat America’s missile defenses is beside the point. U.S. missile defenses are designed for limited threats from rogue states, like Iran and North Korea. They were never intended to stop a massive Russian nuclear attack.”

Barry Pavel, senior vice president, Arnold Kanter chair, and director of the Scowcroft Center for Strategy and Security at the Atlantic Council. (@BarryPavel)

“Does this structurally change strategic nuclear deterrence dynamics between the United States and Russia?  I don’t quite see that yet.

“It seems to me that for the purposes of deterrence the United States can just treat the announced new Russian weapons like two new types of ICBMs [intercontinental ballistic missiles]—they are unrecallable and autonomous.  The United States can target them if the US military knows where they’re deployed.

“So, while this might make Putin look like a tough guy flexing new nuclear muscles ahead of upcoming undemocratic elections in Russia that will coronate him again, the new systems don’t change the essential deterrence equation between the United States and Russia.”