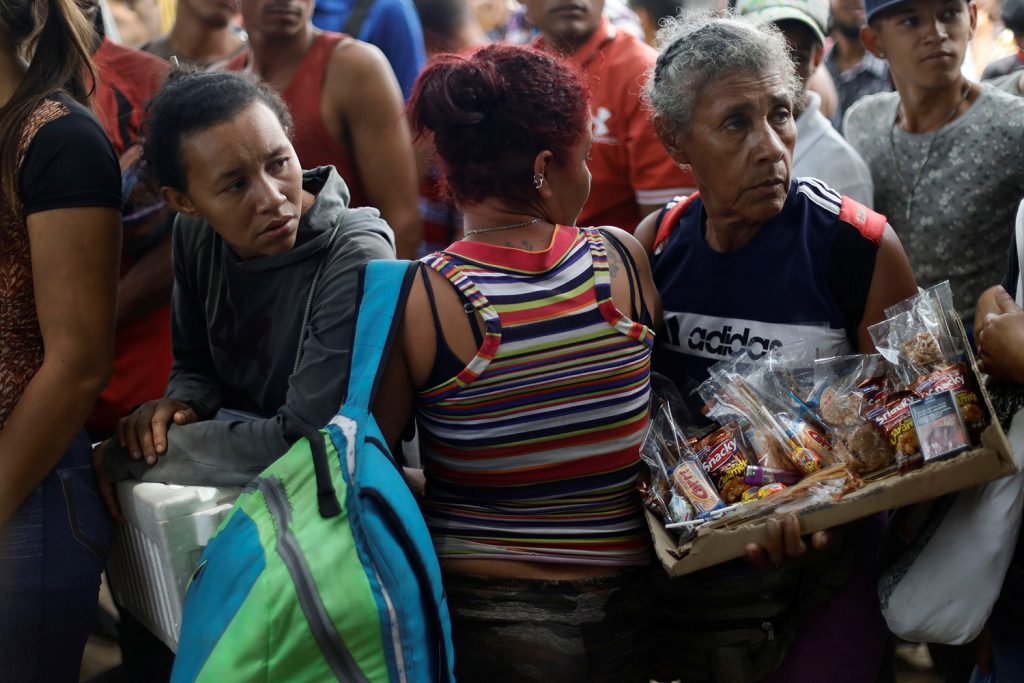 A Venezuelan woman holds a box containing products for sale as she lines up for a free lunch at the "Divina Providencia" migrant shelter on the outskirts of Cucuta, at the Colombian-Venezuelan border February 20, 2019. REUTERS/Edgard Garrido

In response to the ongoing humanitarian crisis, and the political and economic instability in the country, approximately 5.3 million refugees and migrants have left Venezuela. Among the victims of this crisis, there is one group in society that has been disproportionately affected by the ever-changing situation and by the difficult decision to migrate—Venezuelan women.

Although gender inequality is not a novel issue in Latin America and especially not in Venezuela, the current humanitarian crisis has made women more vulnerable financially, politically, and socially, and made sexual violence and discrimination commonplace. According to a recent report by Venezuelan non-profit organization Center for Peace and Justice (CEPAZ), the crisis has increased women’s vulnerability through the lack of governance and weakened institutions, impoverishment, lack of access to food and medicine, and the rising forced migration, among other factors.

Women have historically been one of the main beneficiaries of economic and social government programs in Venezuela that aim to fight poverty and promote social inclusion. However, as the economic crisis continues to worsen, Venezuelans have increasingly relied on these programs to gain access to minimum levels of income and food. Taking advantage of these conditions, the authoritarian leader, Nicolas Maduro, and his regime have used these programs as social control mechanisms, providing access only to those who pledge political loyalty. This type of discrimination has affected the livelihoods of thousands of women and their families, who have been targeted due to speaking out against the government. The lack of economic security and political discrimination in government social programs are among the many variables that have driven Venezuelans to migrate.

Separately, the latest United Nations World Food Program report showed that one in every three Venezuelans are struggling to meet minimum nutrition requirements with their current food intake. This figure echoes the 2019 United Nations High Commissioner’s (UNHCR) report on Venezuela’s human rights, which highlighted that “access to food due to scarcity as well as unaffordability has a particularly adverse impact on women who are the main caregivers and/or heads of households, and who dedicate an average of ten hours per day queuing for food.” The report also noted that the highest level of malnourishment was found among children and pregnant women.

In terms of health-related vulnerabilities, the lack of skilled personnel, medical supplies, and sanitary hospital conditions have led Venezuelan women to leave the country to give birth abroad. There is also a lack of access to contraceptives, which has increased the transmission of sexually transmitted diseases and the number of unwanted teen pregnancies. Subsequently, 20 percent of maternal deaths are linked to unsafe abortions.

The UNHCR report confirmed that the lack of access to food and health, increasing levels of violence and insecurity, collapse of basic services, lack of access to pre and post-natal care, deterioration of education system, and persecution on political grounds are among the many reasons Venezuelan women decide to leave their country in search of better opportunities.  Gender vulnerability grows exponentially, however, with the risks that women face as migrants both in transit and destination countries.

Despite their desire to improve their lives, Venezuelans who migrate currently encounter severe challenges abroad, particularly the lack of regular migration status, which prevents their inclusion in host countries’ formal economies. Additionally, inadequate living conditions, discrimination, labor exploitation, and xenophobia are new realities for Venezuelan migrants throughout Latin America. While the conditions are deplorable for all, Venezuelan women have the heightened risk of being exposed to trafficking, sexual exploitation, and gender-based violence. News of Venezuelan migrant women being exploited and falling prey to human trafficking and prostitution across the region have become more prominent in the past few years.

CEPAZ reported that women and girls’ vulnerabilities intensify due to the different forms of gender discrimination they face, linked to sociocultural patterns in Venezuela and Latin America that perpetuate gender asymmetry, and to hyper-sexualized stereotypes of Venezuelan women.

Venezuelan policymakers and Latin American countries hosting Venezuelan migrants must include a gender perspective to address the issues experienced by Venezuelan women both inside the country and abroad. Countries around the region can be proactive players by embracing the following policies:

Tackling the most important issues that women face will not only promote equality, but also untapped economic growth by providing opportunities to half of the Venezuelan population that has been overlooked. A prioritization of gender in the migration policies of the communities who are hosting Venezuelans abroad will ultimately generate a more peaceful and stable environment and society.

Women protest for their lives: Fighting femicide in Latin America

Femicide continues to claim the lives of Latin American women on a daily basis. In Mexico, they are standing up to say something about it.

A year in, the United States still stands behind Venezuela’s interim government

As the interim government of Venezuela continues to fight for freedom and democracy against the regime of Nicolás Maduro, the United States is “unwavering in [its] commitment” to helping Interim President Juan Guaidó and the National Assembly, US Agency for International Development (USAID) Administrator Mark Green said on January 23.