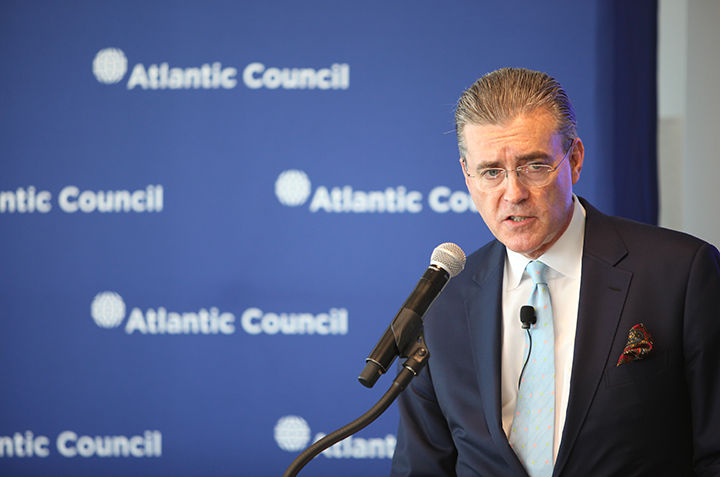 “The renewal of international support for the Afghan security forces will send a strong and clear signal to the Afghan government, the Afghan people, the broader region, and the Taliban that the United States and our NATO allies and partners remain firmly committed to our fundamental goal of a secure, democratic, and increasingly prosperous Afghanistan,” Richard Olson, US special representative for Afghanistan and Pakistan, said at the Atlantic Council on June 21. (Atlantic Council/Victoria Langton)

Commitments at Warsaw and Brussels would send a clear signal to the Taliban, said official

NATO’s Warsaw summit in July and a European Union conference in Brussels in October must provide clear commitments to Afghanistan in order to boost the prospects of peace in that country, a senior Obama administration official said at the Atlantic Council on June 21.

Asserting a US commitment to an Afghan-led peace process with the Taliban, Richard Olson, the US special representative for Afghanistan and Pakistan, said: “The Taliban’s leadership, with its refusal to come to the negotiating table, has apparently reached a different conclusion. Perhaps they believe victory through violence in achievable; perhaps they remain unconvinced of the sincerity of the invitation to negotiate.”

“The Taliban are mistaken if they think they can wait for us to withdraw our support believing that the Afghan forces will somehow become vulnerable to defeat as the international community disengages,” he said. “This is why the commitments at Warsaw, including the funding through 2020, are so important. That is the only way to demonstrate that the commitment is going to be lasting and that if the Taliban seek to have a role in Afghanistan it will have to be through negotiations.”

Olson delivered remarks and later spoke in a conversation moderated by James B. Cunningham, a nonresident senior fellow in the Atlantic Council’s South Asia Center and a former US ambassador to Afghanistan.

NATO foreign ministers agreed on May 20 to sustain the Resolute Support mission in Afghanistan beyond 2016. Olson expected this decision to be confirmed at the Alliance’s Warsaw summit.

“NATO troops, however, are not enough to fulfil our commitment to the Afghan national defense and security forces,” said Olson. “The Afghan government cannot sustain the cost of their security forces without continued international assistance, and this investment in our own security is one that we must continue to make.”

At Warsaw, the Afghan government will seek a renewal of commitments from its friends and allies at current levels for the 2018-2020 period. “The United States will do its part in answering this call,” said Olson, adding that the United States will provide more than $3 billion a year through 2020 and in doing so will remain the single-largest funder of Afghan national defense and security forces.

“The renewal of international support for the Afghan security forces will send a strong and clear signal to the Afghan government, the Afghan people, the broader region, and the Taliban that the United States and our NATO allies and partners remain firmly committed to our fundamental goal of a secure, democratic, and increasingly prosperous Afghanistan,” he said.

It is with this reality in mind that the United States, NATO, and Afghan planners are working to cut Afghan security forces’ costs from a current level of approximately $5 billion a year without compromising the force’s effectiveness.

The Afghan National Security Forces (ANSF) have suffered large causalities in the war with the Taliban. The ANSF also faces serious problems with retention and performance of logistics, intelligence, and reconnaissance services, corruption, and so-called “ghost soldiers.”

Olson noted progress in the ANSF and said the international community’s investments in Afghanistan’s security are yielding dividends. “It is certainly not the same country that it was fifteen years ago,” he said—referring to achievements in education, health, and women’s rights.

“Afghanistan’s security is our security,” he added.

Afghan President Ashraf Ghani’s efforts to make peace with the Taliban, a process that involves the United States, China, and Pakistan in a quadrilateral grouping, has failed to produce results. A glimmer of hope was provided when the Taliban agreed to participate in preliminary discussions in Murree, Pakistan, last summer. That process, however, fell apart after it was revealed that the militant group’s leader, Mullah Omar, had been dead for two years.

Mansour was killed in a US drone strike on May 21. The Taliban’s repeated refusals to join peace talks with the Afghan government contributed to the US decision to kill Mansour, but this operation did not represent a shift in the Obama administration’s strategy in Afghanistan, Olson contended.

“Nonetheless, this strike [on Mansour] should make clear to all parties in the region that the United States is fully prepared to protect its interests,” said Olson. “Mullah Mansour was an obstacle to peace, posed a continued threat to US persons through his support for operations against US forces, and was perpetuating a war without end.”

Last year, US President Barack Obama, responding to a request from Ghani, agreed to slow the pace of the withdrawal of US troops from Afghanistan. Under the current plan, 9,800 US troops will remain in Afghanistan until the end of the year with that number dropping to 5,500 in 2017.

The United States is not resuming day-to-day combat operations in Afghanistan and it is Afghan security forces that have full responsibility for providing security in the country, said Olson.

“It would be helpful to get into a negotiating process so we can find out what the Taliban actually wants as opposed to what it puts out through its propaganda,” he said.

The Taliban’s stated objective is the withdrawal of foreign forces from Afghanistan. If the Taliban is serious about that goal it should be clear that the only way to achieve that is by joining a “meaningful, lasting political settlement with the Afghan government,” said Olson.

Early in his presidency, Ghani expended a considerable amount of political capital by reaching out to Pakistan, which provides safe havens and support to terrorist groups that have attacked Afghan and US forces in Afghanistan.

Olson, who has previously served as the US ambassador to Pakistan, said Pakistan had made a “good-faith effort” to try and bring the Taliban to the negotiating table. Pakistan has also dealt decisively with terrorist groups that threaten the state, but it has been reluctant to take on terrorists that threaten its neighbors, he said.

Mansour, the Taliban’s late leader, appointed Sirajuddin Haqqani of the Pakistan-based Haqqani Network as one of his deputies. Former Chairman of the Joint Chiefs of Staff, Adm. Mike Mullen, once described the Haqqani Network as a “veritable arm” of Pakistan’s Inter-Services Intelligence (ISI) agency. Pakistan’s government denies any such linkages.

Olson suggested that the Pakistani military expand its operations against terrorists in the North Waziristan tribal area to include groups like the Afghan Taliban and the Haqqani Network that have sanctuaries in Pakistan.

“It doesn’t seem to us that Pakistan will have a bright future…unless and until it goes after the Afghan Taliban,” said Olson. “If the Afghan Taliban perceive that it is in their interests to come to the table because their sense of certainty about their safe haven is shaken, I think that would be a very significant development.”

Ashish Kumar Sen is deputy director, editorial, at the Atlantic Council. You can follow him on Twitter @AshishSen.