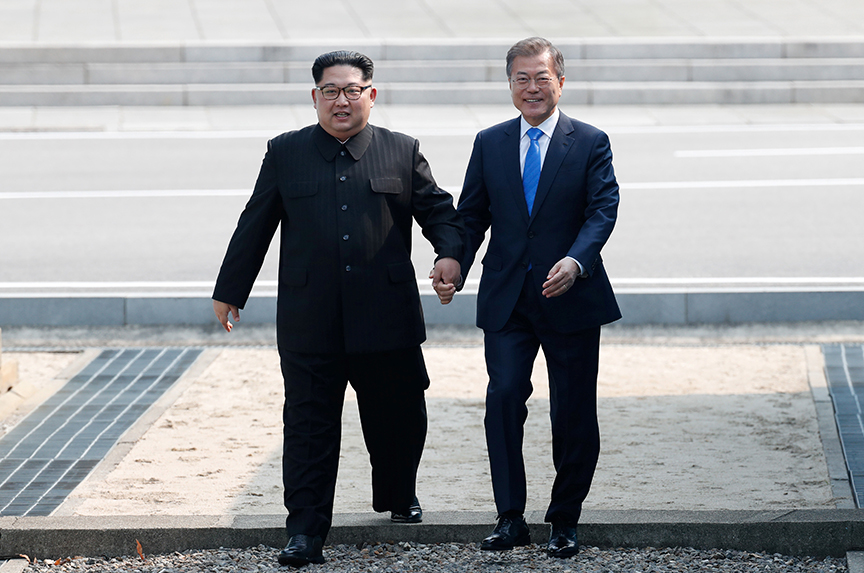 South Korean President Moon Jae-in has prioritized mending ties with North Korea. His high-stakes diplomacy is playing out on the sidelines of a US effort to get Pyongyang to give up its nuclear weapons. Moon’s effort has been marked by a historic meeting with North Korean leader Kim Jong-un and a rare, albeit brief, reunion of families divided by the war six decades ago. There are, however, limits to how far Moon can proceed absent progress in US-North Korean diplomacy.

Moon has staked his presidency on achieving peace with North Korea. These stakes are especially high. “That’s what a lot of us are worried about,” said Robert Manning, a senior fellow in the Atlantic Council’s Scowcroft Center for Strategy and Security, referring to the political risk facing Moon. “The South Koreans have tried to walk right up to the edge of doing things that advance North-South relations without going over the line. The stalemate of our policy is putting them in a really difficult position,” he added.

Moon met Kim at the border village of Panmunjom on April 27. Kim crossed over into South Korea for the meeting becoming the first North Korean leader ever to set foot in South Korea since the end of the Korean War in 1953. While active conflict in the Korean War lasted from 1950-53, the two Koreas are technically still at war because a peace treaty was never signed. Moon is expected to meet Kim again in September. But to what end?

The South Koreans will be “very, very reluctant” to do anything that jeopardizes its alliance with the United States, said Manning. So, he predicted, efforts to mend the inter-Korean relationship could slow down.

Robert Manning spoke in an interview with the New Atlanticist’s Ashish Kumar Sen. Here are excerpts from the interview.

Q: What do the North Koreans seek in return for denuclearization?

Manning: We don’t know because we have never tested it.

[US Secretary of State Michael] Pompeo has said he wants North Korea to hand over 60 to 70 percent of its nukes. That’s absurd. We have seven decades of well-earned, deep-seated distrust on both sides. One of the main reasons the North Koreans have nukes is because they are afraid of us. Remember, until 1991, the United States had tactical nukes in South Korea.  What we are essentially telling them is: “Give us what we want, trust us, and then we will loosen sanctions.” It doesn’t work that way.

The biggest problem goes back to the terrible, uselessly vague statement that followed the Singapore Summit [between US President Donald J. Trump and Kim on June 12]. The North Koreans say we are not living up to our commitments to a peace regime and we’re saying the North Koreans are not living up to their commitments on denuclearization. We’re both right because there is no mechanism in the agreement that suggests what comes next or how you do it.

Q: What are your thoughts on reports that Trump told Kim at the Singapore Summit that he would sign a declaration to end the Korean War, but the Trump administration has since prioritized denuclearization?

Manning: We have given Kim at least half a dozen security assurances—no-hostility-no-attack pledges—going back to at least 1994. They have mattered little. Why one more piece of paper matters is beyond my comprehension.

What a lot of us have been recommending is that we ask North Korea to give us—by a date certain—a full inventory of its nuclear weapons, fissile material, and facilities and that we will convene with China and the two Koreas a four-party process leading to a peace treaty. That’s a reasonable equation and if the North Koreans reject it that’s on them. I’m afraid that the way things are going right now, the United States will be perceived as the bad guy by China and South Korea.

Meanwhile, the North-South discussions are going forward. There have been family visits, they are talking about confidence-building measures, there will be a summit [between Kim and Moon] in September, and Moon has made an effort to link North-South progress with denuclearization. The reality is we have  nothing on denuclearization. The first baby step is getting the International Atomic Energy Agency [the United Nations’ nuclear watchdog] a full inventory of the North Korean program to acknowledge what North Korea claims it has, and set up an inspection and monitoring regime within 30 to 45 days. The North Koreans could allow the IAEA to visit their Yongbyon reactor as a down payment.

Q: Are the United States and North Korea back on the path to confrontation?

Manning: We seem to be headed back toward a stalemate. I feel we’re not that far from “fire and fury” all over again. The problem is it will be much more difficult to reapply “maximum pressure” on North Korea. When Trump met Kim, China read it as a message to normalize its relationship with North Korea. China, despite a lot of criticism, had done far more to squeeze North Korea than many of us ever expected; it clearly had an impact. That pressure is now being quietly eased up.

Q: How should the United States proceed?

Manning: The White House said one of the mistakes we had made in the past was not getting frontloaded results. Perhaps they are right, but what benefits are they going to frontload to North Korea? Is it sanctions relief? Is it economic investment? There is no sense this has been thought through and that they have a strategy for reciprocal, proportionate steps in a calibrated diplomatic process. They vastly overestimate American leverage. Short of starting a war, our leverage is limited.

The Trump administration did a very good job of applying pressure on North Korea. We had a critical mass to really push them; it worked. But I don’t see any evidence of a clear idea of a process.

By raising the possibility of a resumption of joint military exercises with South Korea, [US Defense Secretary James] Mattis made a good effort to try to remind people that the United States made a major concession by suspending these exercises. Joint exercises are the glue of alliances. If you don’t have joint training it is very difficult to fight together.

Another mistake we are making is that every one of the frontline states in Northeast Asia is making their own deals with North Korea—the Chinese, Russia, and even Japan has been secretly meeting with the North Koreans because they have been cut out of the process.

Q; In the past, North Korea used uncertainty to its advantage. Now, given the uncertainty coming from the White House to whose advantage does that play?

Manning: The tragedy to me is Trump’s disruptive ideas could be useful if they were followed through correctly. I thought it was a really bold move to meet Kim. To Trump it is a reality TV show, but in the real world it has to be connected to a strategy.

Meanwhile, what we see coming out of North Korea is just right out of its old playbook—deceive, deny, delay. The incompetence of our policies is playing into that North Korean narrative. I hope the administration will step back and we’ll see a course correction.

Q: What impact does failed US-North Korea diplomacy have on South Korea, especially on Moon who has staked his presidency on peace?

Manning: That’s what a lot of us are worried about. The South Koreans have tried to walk right up to the edge of doing things that advance North-South relations without going over the line. The stalemate of our policy is putting them in a really difficult position. To his credit, Moon sees himself as a mediator between the United States and North Korea. He will use his summit with Kim [in September] to mediate. Whether he will succeed or not I don’t know.

Q: Is there a limit to how much progress the two Koreas can make in improving their relationship in the absence of a peace treaty or progress in US-North Korean diplomacy?

Manning: That would be a major strategic choice that the South Koreans are very, very reluctant to make. The US-ROK alliance has 90 percent support in South Korea. When you are a middle power surrounded by two major nuclear powers and a country called China that has invaded you several hundred times over the last two millennia, alliances with powerful countries that are far away look pretty damned good.

I think we will see [the North-South effort] slow down. There may be some retribution from the North because I don’t think the South Koreans will put the alliance at risk. Despite what some liberals in town think, we are not going to have a peace treaty with a nuclear North Korea. Either we have a real end of confrontation, conventional arms reductions, and peace—think of the end of the Cold War as an analogy—or we won’t.

Robert A. Manning is a senior fellow in the Atlantic Council’s Scowcroft Center for Strategy and Security. Follow him on Twitter @Rmanning4.