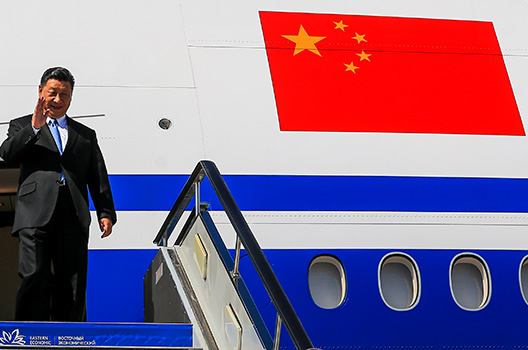 The United States and its closest intelligence allies have been intensifying efforts to identify growing Chinese influence campaigns abroad since the beginning of the year. The effort by the “Five Eyes” alliance—consisting of the United States, the United Kingdom, Canada, Australia, and New Zealand—has also begun reaching out to other countries to share findings, according to an exclusive Reuters report on October 12.

Amidst the backdrop of growing trade tensions between the United States and China, Washington has begun drawing attention to growing Chinese influence and economic campaigns within Western countries and in regions across the world. During a United Nations Security Council meeting on September 26, US President Donald J. Trump accused Beijing of “meddling” in the upcoming US midterm elections because the Chinese do “not want me or [the Republicans] to win.”

US Vice President Mike Pence took further aim at Beijing in a long-ranging October 4 speech, which highlighted Beijing’s “whole-of-government approach using political, economic, and military tools, as well as propaganda, to advance its influence and benefit its interest in the United States.” On October 10, US and Belgian authorities detained a Chinese national who is accused of stealing trade secrets from US company General Electric.

Concerns about growing Chinese aggression and covert influence have been growing among Washington’s closest allies as well. A top-secret report leaked earlier this year in Australia found that Beijing had achieved “infiltration at every layer of Australian government, right down to local councils.”

“The low-cost, high-impact, and virtually nonexistent consequences for these [influence] tactics are encouraging a multitude of nations to employ them,” said John Watts, a nonresident senior fellow in the Atlantic Council’s Scowcroft Center for Strategy and Security.

“China poses a particularly difficult challenge,” however, “as its influence operations are more subtle, sophisticated, and insidious than other nations,” according to Watts.

Growing distress about the success of Beijing’s operations has led the “Five Eyes” countries to expand their cooperation against the threat and reportedly share their information with other potential partners. The Reuters report lists France, Germany, and Japan as possible recipients of Five Eyes information.

While the Five Eyes countries share considerable amounts of intelligence with these and other allied countries (in venues such as NATO, for example), expansive sharing of information from the Five Eyes forum would be significant. Five Eyes was born out of US-UK intelligence cooperation in the Second World War and remains one of the closest intelligence-sharing relationships in the world. The willingness of these countries to involve other partners demonstrates the seriousness with which they view Beijing’s influence operations.

“Foreign influence campaigns pose a serious and persistent threat to Western nations,” Watts said. “While not new, the hyper connectivity of the globalized economy combined with the power of modern social media capabilities create particularly critical vulnerabilities to open and democratic nations.”

The Five Eyes countries increasingly view counter-intelligence as the appropriate venue through which to counter Beijing’s activities. In June, Australia tightened its foreign lobbyist and counter-espionage laws in an attempt to strengthen its defense against Chinese influence. On September 4, the New York Times reported that the Five Eyes countries had also “quietly warned technology firms that they will demand ‘lawful access’ to all encrypted e-mails, text messages, and voice communications,” in an effort to counter the spread of encrypted messaging out of the reach of intelligence services.

Beijing’s “use of economic leverage, global networks, and sophisticated technological capabilities means it is crucial for like-minded partners such as the Five Eyes nations to respond in a committed, coordinated, and comprehensive way,” Watts said. By expanding their intelligence-sharing, Five Eyes nations—and potentially others—are beginning to form a common front to push back on Beijing’s growing influence.