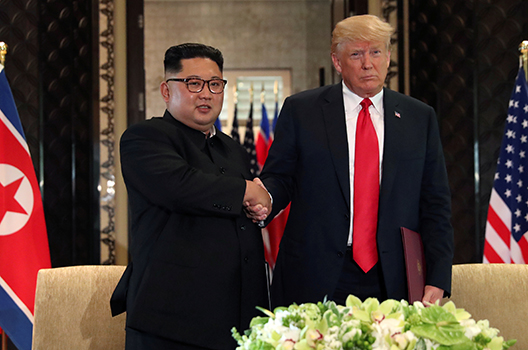 U.S. President Donald Trump shakes hands with North Korea's leader Kim Jong Un after they signed documents that acknowledged the progress of the talks and pledge to keep momentum going, after their summit at the Capella Hotel on Sentosa island in Singapore June 12, 2018. (REUTERS/Jonathan Ernst)

A report released this week that exposes the existence of more than a dozen hidden missile bases in North Korea may not be news to intelligence services in Seoul and Washington, but the exposure has important political implications for US negotiations with the North, and indeed stability on the Peninsula. Equally, it highlights the power of crowdsourcing, open-source intelligence gathering, and analysis by the public at large. This, too, has implications for policy making well beyond the report’s findings.

The Washington Post reported on November 12 on how a small group of Korea experts pieced together publicly available satellite imagery and interviews with North Korean defectors and government officials to identify thirteen undeclared missile bases. They conclude more bases may be hidden. The Washington Post reported on July 30, 2018, that North Korea could be constructing new missiles at the same factory that produced its first intercontinental ballistic missiles capable of reaching the United States.

The latest report’s findings are neither a violation of formal North Korean commitments to the international community, nor of Chairman Kim Jung-un’s current nuclear and ballistic missile testing freeze. It certainly calls into question, however, the sincerity of North Korea’s recent joint declaration during a leadership summit in September at which it agreed to “permanently dismantle” a missile engine test facility and a missile launchpad.

The disclosure also does not contradict Kim’s proposal to dismantle the state’s largest declared nuclear materials and weapon fabrication site at Yongbyon, a facility mothballed and restarted several times since the signing of the US-North Korean Agreed Framework in 1994. Earlier this year, the North asserted destruction of its only known nuclear weapons test site in Punggye-ri, but no experts were allowed near the site to witness the event.

But this week’s public exposure of more missile sites further erodes belief in North Korea’s intent to shift strategically from guns to butter and makes its public declarations of good intent even less believable. Even though negotiators may have been aware of these sites for some time, public opinion matters.

The exposure risks more questioning of what US President Donald J. Trump really got for making multiple strategic concessions to North Korea. It makes it harder for the United States to stay quiet as South Korea races forward toward rapprochement with the North. It will lead to heightened scrutiny from the Democratic-controlled House of Representatives, now empowered —for the first time during the Trump presidency—to hold hearings that could feature witnesses highly critical of the president’s giveaways.

Trump has staked much personal prestige on charming Kim into retreat. The president has even already declared the North Korean threat resolved. The combination of probable adversarial hearings in Congress and the personal embarrassment of more North Korean bad behavior risks angering the president.

Trump’s foundation of “progress” with the North on nuclear and missile programs already is so thin that more embarrassing exposures could trigger the president to revert to threat on short notice. Such an action would be especially damaging given how personally and publicly vested Kim is to an outcome favorable to the North.

Presidential threat would create friction with South Korean President Moon Jae-in. Moon is moving extraordinarily fast with the North on intra-Korean dialogue, asserting that building trust and confidence with the North will make denuclearization easier down the road. (The longstanding US position is concrete progress on nuclear issues before sanctions relief). Joint demining, suspending military flights, taking down armed guard towers, and shared searches for remains of fallen soldiers by the South and North is good in all circumstances. But from an American standpoint, a fast-moving South reduces pressure on North Korea to yield on nuclear and missile matters.

So where to go? The first most important thing to do is solidify the US relationship with South Korea. North Korea may not be demonstrating much intent to trade its strategic weapons programs for normal relations with the rest of the world, but this is nothing new. The release of this week’s report exposing to the public more nefarious programs by the North is neither shocking or strategically significant. It is embarrassing and exposes more holes in the president’s declaration of peace in our time, but this is manageable absent a loss of temper. The harder thing to do is making sure presidential pique will not turn charm to hostility so quickly that South Korean officials and popular opinion blame the United States for North Korean behavior. Joint dialogue between the South and the United States toward a new roadmap is essential.

Todd Rosenblum is a nonresident senior fellow at the Atlantic Council’s Scowcroft Center for Strategy and Security. Follow him on Twitter @ToddRosenblum1.