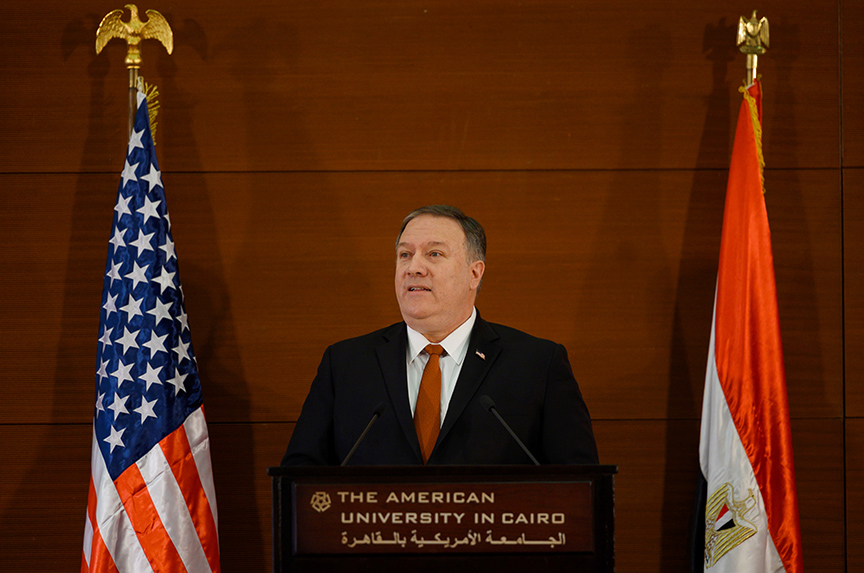 US Secretary of State Mike Pompeo addressed students at the American University in Cairo, Egypt, on January 10. (Andrew Caballero-Reynolds/Pool via Reuters)

At the two-year mark of his presidency, Donald J. Trump finally has the team he wants. With the departure of H.R. McMaster, John Kelly, and James Mattis, individuals more aligned with the president’s inclinations now have his ear inside the White House, as do prominent conservative commentators on the outside. US Secretary of State Mike Pompeo is careful not to step on Trump’s toes—when asked on his way back from Turkey what the president meant by threatening to devastate Turkey economically, Pompeo replied, “you’d have to ask him.”

On Yemen, the Trump administration has tied the worst humanitarian disaster in the world to stopping the spread of Iranian influence. The crisis in Yemen was not the focus of Pompeo’s Cairo speech on January 10, where he mentioned Iran at least two dozen times, including the promise “to expel every last Iranian boot” from Syria. Pompeo did express support for UN efforts to achieve peace in war-torn Yemen, but announced no special US diplomatic initiative toward that end.

Trump has made clear his own focus on Iran in his rare statements on Yemen. “The country of Iran,” an official White House release explained, “is responsible for a bloody proxy war against Saudi Arabia in Yemen… On the other hand, Saudi Arabia would gladly withdraw from Yemen if the Iranians would agree to leave.”

Iran certainly supports the Houthis in Yemen, but there is no need to exaggerate its support.  Iran has taken advantage of the conflict to counter Saudi influence, but it did not start the fighting which began as a Houthi-led insurrection against the central government of Yemen and not a war against Saudi Arabia. Iran provides money and material, including rocket parts, to the Houthis, but there are no Iranian brigades in Yemen for it to withdraw.

Notwithstanding this singular focus on Iran, in November 2018, weeks prior to the start of the Stockholm peace talks, then Defense Secretary James Mattis announced that the Yemen war must stop and that the United States expected to see serious peace talks between the warring factions within a month. Also in November, the Pentagon announced that the United States would stop refueling Arab coalition planes bombing Yemen. (Of course, US refueling only made up a reported 20 percent of all coalition refueling, so the Arab coalition’s bombardment of Yemen continued unimpeded.)

These steps appear to be partially taken in response to the anticipated action by the US Congress against Saudi Arabia following the murder of Washington Post columnist Jamal Khashoggi.  While the Senate voted 63 to 37 for a resolution to end US support for the Saudi war in Yemen, the House of Representatives did not follow before the end of the last Congress.  It remains unclear whether the Trump administration’s actions will be enough to satisfy critics in the new Congress.

The House, now with a Democratic majority, is poised to push the measure again, likely to be taken up relatively soon after the federal government shutdown ends.  Trump will most likely veto any measure to end US support for the Saudi war in Yemen that passes both chambers. Given the numbers, a successful veto override is very much in question.

Such an outcome would be an embarrassment for the Trump administration, and a further impediment to  its larger approach to the region.  The administration’s much-touted Middle East Security Alliance (MESA)—the closest thing to a Trump doctrine—first emerged during the president’s first visit overseas—to Saudi Arabia. Saudi Crown Prince Mohammed bin Salman (MbS) presented Trump with an Arab, Islamic, American conference to showcase his ability to bring Arab and Islamic countries together behind what he considered to be mutual national security interests.

MESA, sometimes referred to as the Arab NATO, springs from the notion, jointly held by Saudi Arabia and the Trump administration, that Iran is responsible for much of the trouble in the Middle East and that it must be countered by land, sea, and air. The Gulf Cooperation Council (GCC) countries, plus Egypt and Jordan, would be geographically, politically, and economically—at least on paper—a more than adequate force to stop Iran’s malign influence. Thus far, however, despite multiple leaks that the launch of MESA was imminent, no such announcement has been made.

As several regional commentators have pointed out, neither Egypt nor Jordan are interested in a strategic confrontation with Iran.  At the outset of its intervention in Yemen, Saudi Arabia asked Jordan, Egypt, and Pakistan for assistance but they have consistently refused to throw their armies into the fight.  Qatar, whose participation in MESA would be needed to preserve GCC unity, is much more interested in diplomacy than confrontation with Iran and, in any case, is itself the target of a blockade imposed by Saudi Arabia and the UAE.

Yemen has thus become a footnote in this grand design and a pawn for regional rivalries.  The conflict in Yemen remains a stubborn one, at least as far as a military resolution is concerned. The Arab coalition enjoys air superiority and technological advantages on the ground which, given time, could eventually tighten the blockade around the Houthis and perhaps drive them out of the capital Sana‘a.  For this to happen, however, several more years of war might be needed and Yemen, already suffering the worst humanitarian disaster in the world, would be totally devastated. Further, the leading countries in this war—Saudi Arabia and the UAE—suffer from inherent weaknesses that disadvantage them in guerrilla warfare at which the Houthis are quite adept.

In the final analysis, the Trump administration, by giving MbS a pass on Khashoggi’s murder and refusing to press Saudi Arabia on the killing of civilians in Yemen, is giving Saudis the impression that they could continue indefinitely with their attempts to defeat the Houthis with US support.

The MESA idea, unrealistic though it may be, is further encouragement for the Arab coalition to seek victory on the battlefield rather than a diplomatic solution. In addition to ruining Yemen, nothing about this war is in the United States’ national security interests. The longer the war goes on the stronger the Houthis’ relationship with Iran gets, the further widespread is the al Qaeda presence and, to boot, the Russians are getting to fill another void left by the United States by inserting themselves into the peacemaking process with their increased contacts with the south of Yemen—an area with which the Soviet Union once had a very special relationship when south Yemen had a Marxist government.

The only hope for ending the Yemen war lies with enough congressional pressure to force the administration’s hand to use its military assistance to Saudi Arabia as leverage—actually cutting off all Yemen war-related help in order to open the way for serious multilateral diplomacy and bring about a solution.

Nabeel Khoury is a nonresident senior fellow at the Atlantic Council’s Rafik Hariri Center for the Middle East. A retired foreign service officer, Khoury has served as a spokesman for the Department of State in Iraq in 2003 and as deputy chief of mission in Yemen from 2004 to 2007. Between 2008 and 2012, he was the director of the Near East South Asia office of the Bureau of Intelligence and Research (INR). Follow him on Twitter @khoury_nabeel.