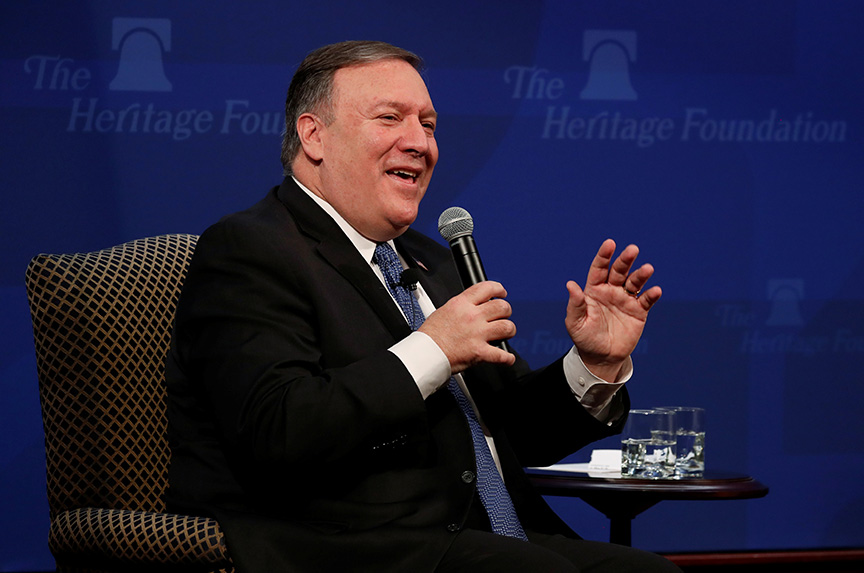 “The [Iran nuclear deal] put the world at risk because of its fatal flaws,” US Secretary of State Mike Pompeo said at the Heritage Foundation in Washington on May 21. (Reuters/Jonathan Ernst)

Several years ago, Henry Kissinger famously stated that Iran must decide if it wants to be a country or a cause. On May 21, US Secretary of State Mike Pompeo re-articulated this question, offering Iran a sharp choice: to be welcomed back into the community of nations if it abandons its destabilizing security policies or be subjected to an unrelenting US-led pressure campaign if not.

Since US President Donald J. Trump withdrew the United States from the Joint Comprehensive Plan of Action (JCPOA), otherwise known as the Iran nuclear deal, on May 8, critics have challenged his administration to present a credible “Plan B” for what comes next. Pompeo provided such a plan in a speech on May 21. Any viable strategy must begin with a clear statement of objectives and Pompeo’s speech precisely stated US demands on Tehran: abandon its support to violent non-state groups, halt its ballistic missile development, and shut down its uranium enrichment program, among other steps.

Critics argued that this was an overly ambitious and unrealistic set of goals, but these are standards of behavior that Washington routinely expects of other states, including its closest allies and partners. For example, the United States has long worked to stop the spread of uranium enrichment technology to all states. By giving an international stamp of approval to Iran’s enrichment program, the JCPOA set an unfortunate precedent that weakened nonproliferation standards and complicated civil nuclear negotiations with friendly governments, such as in Saudi Arabia and South Korea. By calling for Iran to cease its enrichment program (which has no justifiable purpose other than to build a bomb) Pompeo rightly reclaimed the United States’ longstanding nonproliferation norms.

To achieve US objectives, Pompeo promised to impose intense economic pressure on an already struggling Iranian economy. Many have doubted whether the United States can follow through with sanctions pressure without the support of allies. And, to be sure, the Trump administration should have done much more to lay the groundwork with partners before making the momentous decision to withdraw from the JCPOA. Pompeo’s speech aimed to correct this misstep, calling on allies by name to join the United States and promising a forthcoming round of diplomatic outreach to explain and coordinate the outlined strategy.

Moreover, as the Obama administration demonstrated in the run-up to the negotiation of the JCPOA, the power of US secondary sanctions will give foreign firms in Europe and Asia little choice other than to comply with the US-led sanctions regime. In the end, therefore, the United States’ security partners will almost certainly come around to supporting the new US approach.

Some have argued that the Trump administration does not truly aim for a renegotiated deal as it claims, but, rather, the new strategy is a Trojan horse for regime change. This is an overly fine distinction. Fears of regime survival likely played into Supreme Leader Ayatollah Ali Khamenei’s decision to seek economic relief through the JCPOA in 2015 and regime-destabilizing levels of pressure will be just as essential to striking an even stronger accord.

Crucially, the strategy articulated by Pompeo offers Iran carrots as well as sticks. If Tehran is willing to alter its security policies, the United States is prepared to provide substantial benefits, including full diplomatic relations, economic engagement, and transfers of advanced technology.

A good strategy must mitigate downside risks and the greatest danger of ending the Iran deal is that Tehran will expand its uranium enrichment program and make a dash for the bomb. To deter this potentiality, Pompeo placed the military option back on the table, stating “if they restart their nuclear program, it will mean bigger problems—bigger problems than they’d ever had before.”

In sum, Pompeo’s speech articulated a comprehensive strategy that may represent our best hope for achieving a deal that eliminates, not just delays, the Iranian nuclear threat.

Matthew Kroenig is deputy director for strategy in the Atlantic Council’s Scowcroft Center on Strategy and Security and a former adviser on Iran policy in the Office of the Secretary of Defense. Follow him on Twitter @kroenig.