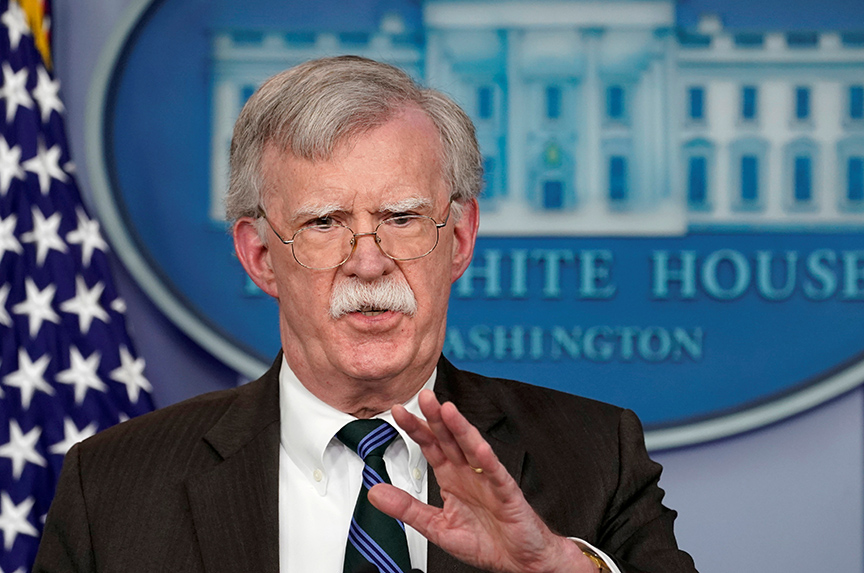 US National Security Advisor John Bolton, pictured here at the White House in November 2018, unveiled the Trump administration’s Africa strategy. “This strategy is the result of an intensive interagency process, and reflects the core tenets of President Trump’s foreign policy doctrine,” he said on December 13, 2018. (Reuters/Kevin Lamarque)

Africa has generally ranked near the bottom of US foreign policy priorities. Historically, two-term presidents have waited until their second term to establish their legacies on the continent, and many one-term presidents have neglected it altogether. US President Donald J. Trump has surprised many by bucking this trend.

In December, US National Security Advisor John Bolton unveiled a formal strategy for Africa. The document was originally slated for public release but has subsequently been classified, meaning that many details of the strategy will remain hidden from public view. Nevertheless, Bolton’s comments provide some welcome insight into the Trump administration’s philosophy on Africa and establish several benchmarks against which the administration’s practices can be assessed.

Since 9/11, Washington has deepened its military engagement with key African nations, both in response to persistent conflicts (in South Sudan and the Democratic Republic of the Congo, for example) and to stem radicalization (primarily in the Sahel, North Africa, and the Horn). The Bush administration announced the creation of a unified Africa Command (AFRICOM) in 2007. Under the Obama administration, the Pentagon established several new military outposts across the continent and launched counterterrorism partnerships with Cameroon, Uganda, and a host of other nations. In a move that was controversial within the ranks of his liberal base, US President Barack Obama also dramatically boosted the presence of US special operations forces on the ground and increased the tempo of airstrikes against suspected terrorists.

The first two years of the Trump administration have been marked by an even greater surge in kinetic engagements across the continent, especially in Somalia, where US security forces conducted forty-seven airstrikes against al-Shabaab in 2018 (a 200 percent increase from 2016). In March of 2017, the White House decided to ease some of the rules and regulations surrounding combat strikes in the country, allowing the Pentagon to persecute targets more speedily without Oval Office approval. The administration also emboldened Central Intelligence Agency powers in Africa, allowing the Agency to conduct drone strikes against suspected terrorists from an airbase in northeastern Niger—authorities the Obama administration had endeavored to curtail. This upsurge of kinetic operations has almost certainly made it more difficult for terrorist organizations to operate across the continent, but previous administrations have found that airstrike surges can spur public backlash and recruitment into extremist groups.

Previous administrations have taken a more holistic approach to security assistance on the continent, scaling up direct-action strikes in tandem with development assistance and military-to-military support. Trump, in contrast, is deeply skeptical of US humanitarian and development efforts and has threatened to dramatically shrink funding for them. In his speech at the Heritage Foundation in Washington on December 13, Bolton made it clear that the United States intends to reserve security assistance for “responsible regional stakeholders” and to cut support for “unproductive, unsuccessful, and unaccountable” United Nations peacekeeping missions. Peacekeeping missions were the hallmark of the Obama administration’s approach to African conflicts, embodied in his “African solutions to African problems” catchphrase, so this marks a dramatic shift in thinking.

The Trump administration is navigating a trade environment far different from that faced by its predecessors: in many African nations, the United States is simply no longer the investor of choice. US trade with the continent has lagged since 2008, while rival powers—including China, India, Turkey, Russia, and the Gulf states—have amped up their diplomacy, trade, and investment. This has already undermined US competitiveness in the region, and the trend is escalating. Bolton spent much of his speech excoriating Beijing and Moscow for “predatory practices” in Africa that he characterized as worsening indebtedness, exacerbating corruption, and fueling exploitative labor practices.

There is some truth to those allegations, and the United States is right to be wary of Chinese dominance of Africa’s growing markets. But it is not the whole picture—many Africans benefit substantially from Chinese investment, particularly in infrastructure. And the administration’s tendency to portray Africa as merely a stage for great power competition (an Off-Broadway one, at that) may rub Africans the wrong way, particularly if it is accompanied by diplomatic strong-arming or a reduction in aid. Warning African nations of the risks of indebtedness to China will only be effective if the United States can offer them a compelling alternative for trade and financing. The reality is, that will be difficult to accomplish. Washington has far fewer strategic imperatives in Africa than China does; it has little capacity or desire to compete with China in obtaining petroleum or financing infrastructure loans. Likewise, most areas of US competitiveness do not (yet) overlap with China’s strengths. But Bolton is correct that the United States needs to position itself better if it wants to be a competitive player in Africa’s economic future.

The Trump administration is actually off to a good start in that regard. Last year, Secretary of Commerce Wilbur Ross participated in a much-publicized trip to the continent, during which he announced billions of dollars in new investments and signed memorandums of understanding to promote public-private partnerships. More important, Trump’s signing into law of the Better Utilization of Investments Leading to Development (BUILD) Act will create a new US International Development Finance Corporation, which will streamline and empower US commercial diplomacy throughout the developing world, but especially in Africa. The Trump administration has also announced a new initiative called “Prosper Africa,” which is currently in embryo but will eventually provide another vehicle to spur US investment in Africa, secure funding from Congress for Africa-focused initiatives, and provide an alternative to China and Russia’s engagement strategies.

Finally, the Trump administration has expressed desire to finally negotiate a model free trade agreement (FTA) with an African nation. This is a welcome development. The goal of the African Growth and Opportunity Act (AGOA), which currently gives forty African countries duty-free access to the US market, has always been to bring these countries up to the high standards necessary to obtain a formal FTA with the United States. But it may also run counter to African efforts to boost trade, at a time when most African leaders are betting their economic futures on regionalism and aspiring to an African Continental Free Trade Agreement, rather than bilateral deals.

The promotion of democracy, human rights, and good governance has been a pillar of US-Africa policy for decades, and it is here that Trump appears most at odds with conventional approaches to the continent. His camaraderie with autocratic leaders and his indifference to exporting American values has led many observers to predict that his administration would ignore civil and human rights abuses in Africa, to the overall detriment of democracy on the continent.

That very much remains to be seen. Washington’s commitment to promoting human rights and democracy abroad has always been shaky. Previous administrations certainly have, on occasion, criticized African dictators for outstaying term limits, launching anti-gay crackdowns, arresting journalists, and manipulating elections. But they have as often ignored such problems when it serves US security interests. Both the Obama and Bush administrations heaped weapons and funding on the Ugandan president, Yoweri Museveni, who manipulated his country’s constitution in order to stay in power for life. Ethiopia has enjoyed a similar immunity from US criticism due to its pivotal role in the “war on terrorism”—Obama praised its “democratically elected” government just months after the ruling party suspiciously won 100 percent of the seats in parliament and launched a brutal crackdown on the political opposition, youths, Muslims, journalists, and bloggers.

US presidents’ oratory on human rights has often been designed to appeal to a political base in the United States; in this regard, Trump is probably no different. Some of his comments have certainly done harm to the United States’ standing in Africa. But in practice, the difference between Trump and Obama on human rights in Africa may prove to be largely rhetorical—subordinate, in both cases, to US security interests on the continent.

When Trump was elected, many predicted that US-Africa policy would suffer, assuming that the continent would recede even further from the attention of US policymakers. The Trump administration has surely surprised these critics by articulating a strategy for Africa so very early on. But the strategy is also, clearly, a shot across the bow, signaling the administration’s intention to challenge long-standing norms in the areas of peacekeeping, humanitarian relief, and development. So far, Trump’s focus on great power competition appears to have raised Africa’s profile and yielded a more business-friendly approach, particularly in the passage of the BUILD Act. In the end, Trump might just surprise us on Africa.

Jonny Gass is an assistant director in the Atlantic Council’s Africa Center. You can follow him on Twitter @JonnyGass.