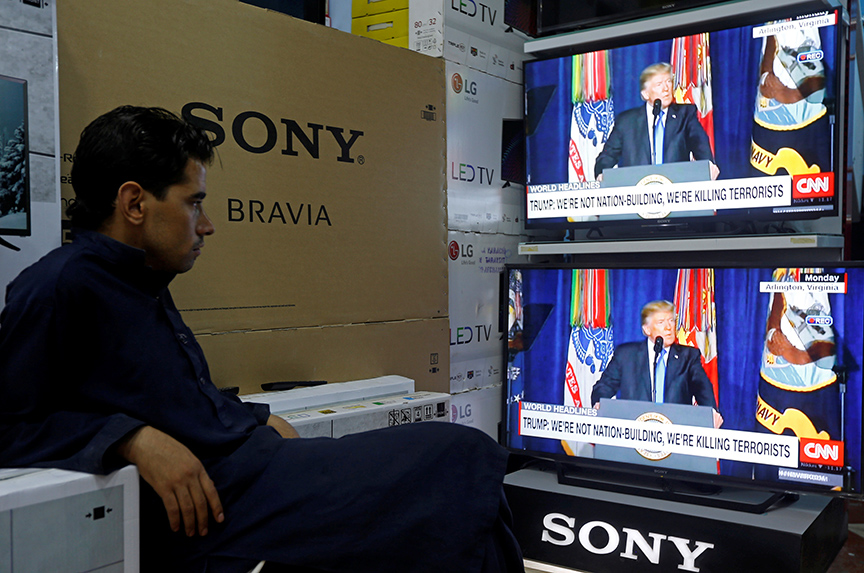 An Afghan man in Kabul on August 22 watched a TV broadcast of US President Donald J. Trump’s speech outlining his policy on Afghanistan. (Reuters/Omar Sobhani)

US President Donald J. Trump should have stuck to his original line of questioning of his national security team before sharing his new “strategy” on Afghanistan and South Asia: what outcome are we seeking, and how will we get there?

Trump’s August 21 speech, in which he outlined his policy on Afghanistan, exemplified the truth of Lewis Carroll’s quotation from Alice in Wonderland: “If you don’t know where you are going, any road will take you there.”

Long on assertions, but short on specifics, Trump’s speech failed to lay out a clear roadmap to “victory” that is based on history and regional ground realities. Indeed, Trump did not identify any benchmarks for actions to be taken by Afghanistan, Pakistan, India, Russia, or even the United States.

The best part of Trump’s speech was what he did not say. He did not declare a date for withdrawing US troops from Afghanistan. This was a mistake that his predecessor, Barack Obama, made. But Trump also did not clarify if Afghanistan is to be a new South Korea, where US troops are indefinitely based. He did make clear that Pakistan is a target and India the United States’ new best friend in the region.

How will Trump’s speech affect countries in the region? Both US Defense Secretary James Mattis and US National Security Advisor H.R. McMaster are students and followers of the Greek historian and general Thucydides and his dictum of “fear, honor, and interest” as guiding principles for action and policy. Let us assume that they placed themselves in Pakistan’s shoes to understand how Pakistan views Afghanistan and the region through Thucydides’ lens. Successive Pakistani governments and the military have long played an apparent “double game” in American eyes that served their interests by allowing the Afghan Taliban and the Haqqani Network to operate from their territory. Recent Pakistani military operations in North Waziristan have, however, denied the Haqqanis the training and storage facilities in that border territory. Pakistani governments and the military saw the Afghan Taliban as a hedge against growing Indian influence in Afghanistan and mistakenly assumed that they could bring the Taliban to the table for peace talks with Afghan officials.

Pakistani officials often quoted inflated figures for the number of Indian consulates in Afghanistan seeing them as potential dens for Indian agents operating in Pakistan’s border provinces. Their strategic thinking was ruled by a deep-seated fear of India becoming a regional hegemon. They also feared that the United States wanted Afghanistan as a permanent base from which it would neutralize or capture Pakistan’s nuclear assets if ever the country descended into chaos.

At the same time, Pakistani officials feared a US withdrawal from Afghanistan would leave behind chaos and a radical Taliban regime that would provide succor to Islamists in Pakistan itself.

Trump stated, “We have been paying Pakistan billions and billions of dollars at the same time they are housing the very terrorists that we are fighting. But that will have to change, and that will change immediately.” But how?

But the longer the war in Afghanistan continues the longer Pakistan will have leverage through the ground lines of communication (GLOCs) that link it to Afghanistan. While Pakistan has closed the GLOCs in the past to protest incidents, it has, until now, kept the air line of communication to Afghanistan open. If it closes both lines of communication the United States would need to establish supply routes via the more expensive Northern Distribution Network that runs through Russia and Central Asia. It is unclear if the United States could use bases in Central Asia to run air operations in support of the coalition’s ground war in Afghanistan. The only other land route that is feasible is via Iran, a country that Trump did not even mention in his speech and that has been spurned as a partner in the quest for a solution to the war in Afghanistan.

A full and proper strategy involving economics, politics, and the military ought to have looked at infrastructure links in South Asia and Afghanistan and reconnecting the countries of the region via transit trade that would benefit India, Pakistan, Afghanistan, and the rest of Central Asia. Such trade could create co-dependencies and local ownership of the wars against militancy and terrorism that are being fought by all countries of the region.

CASA-1000, a regional electricity project that is supported by the United States and by international financial institutions, is already underway. China’s ambitious land route development in the region would also link Afghanistan with its neighbors and perhaps allow better exploitation of Afghanistan’s mineral resources.

The American people need to know how the United States will help Afghanistan improve its governance and build up a security and police force that can autonomously protect the Afghan people and deny the insurgents the space that they currently occupy. Today, the Taliban are well ensconced in large tracts of the countryside and small towns across Afghanistan. The United States and its NATO allies will never be present in enough numbers to deny the Taliban that space or close the long, rough, and difficult border with Pakistan.

Trump would do well to refer to the Soviet Politburo discussion of November 1986 when then Soviet leader Mikhail Gorbachev got his colleagues to assess Afghanistan and decide on withdrawal two years later. Gorbachev told the meeting: “We have been fighting in Afghanistan for already six years. If the approach is not changed, we will continue to fight for another 20-30 years.” Gorbachev’s military chief and deputy minister of defense, Marshal Sergei Akhromeyev, later added: “Military actions in Afghanistan will soon be seven years old. There is no single piece of land in this country which has not been occupied by a Soviet soldier. Nevertheless, the majority of the territory remains in the hands of rebels.” At that time the Afghan army was a force of 160,000. There were 50,000 Soviet troops close to the border with Pakistan, but, as Akhromeyev declared “they are not in the position to close off all passages where cargo is transferred across the border. I repeat that we can maintain the situation at the current level, but we need to look for a way out and resolve the question, as Andrei Adreyevich [Gromyko] has said. We must go to Pakistan.”

Gorbachev listed other neighbors of Afghanistan as potential partners in devising the exit strategy. That regional approach eventually led to the Geneva Accord, allowing the Soviets to leave Afghanistan peacefully.

Trump would do well to consider that approach by bringing in the United Nations or even a neutral Scandinavian arbiter to help manage a peace and reconciliation process that has Afghan, rather than American, ownership. Absence of conflict in Afghanistan and the region is a better benchmark of “victory” than annihilation of those that oppose the United States’ role in the region. Let us not make this strategy, in the words of Yogi Berra, “déjà vu all over again.”

Shuja Nawaz is a distinguished fellow at the Atlantic Council’s South Asia Center. He is also the author of “Crossed Swords: Pakistan, its Army, and the Wars Within.”