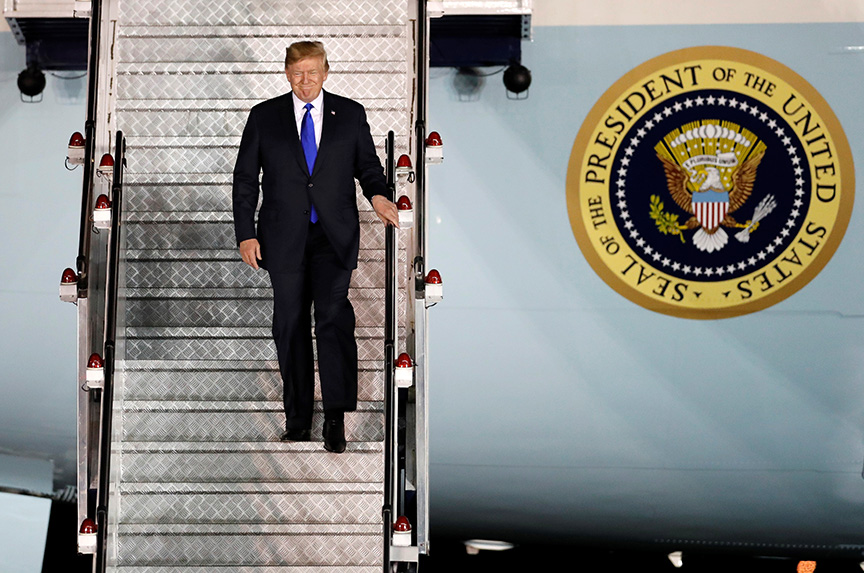 US President Donald J. Trump arrives at Paya Lebar Air Base in Singapore on June 10 ahead of a summit with North Korean leader Kim Jong-un on June 12. (Reuters/Kim Kyung-Hoon)

US President Donald J. Trump will meet North Korean leader Kim Jong-un in Singapore on June 12. Atlantic Council analysts present their views on what they believe to be an achievable, best-case outcome, one that would test North Korea’s readiness for genuine, rapid denuclearization by demanding front-loaded “down payments” during the first twelve months.

North Korea, formally known as the Democratic People’s Republic of Korea or DPRK, will make an overarching commitment to complete, verifiable, and irreversible denuclearization (CVID) within (24)(30)(36) months, to encompass:

The DPRK could also pledge to abide by the United Nations’ Universal Declaration on Human Rights.

As initial steps, within the first twelve months, the DPRK agrees to:


Possible US and South Korean Commitments

The United States and South Korea will make an overarching commitment to respect the sovereignty and independence of the DPRK, to refrain from any actions that could undermine the regime, to co-exist peacefully, and to take steps to normalize diplomatic relations, to include the eventual opening of embassies, and to encourage foreign direct investment in the DPRK.

The United States and the ROK (along with China) would declare their intention, once denuclearization is underway, to sign a peace treaty with the DPRK ending the Korean War, and providing for balanced ROK and DPRK conventional force reductions and confidence-building measures along both sides of the DMZ.

Within the first twelve months, upon verification that the DPRK has begun implementing the initial steps (described above):

Following the completion of verifiable and irreversible denuclearization at the end of (24)(30)(36) months, the United States and the ROK would: