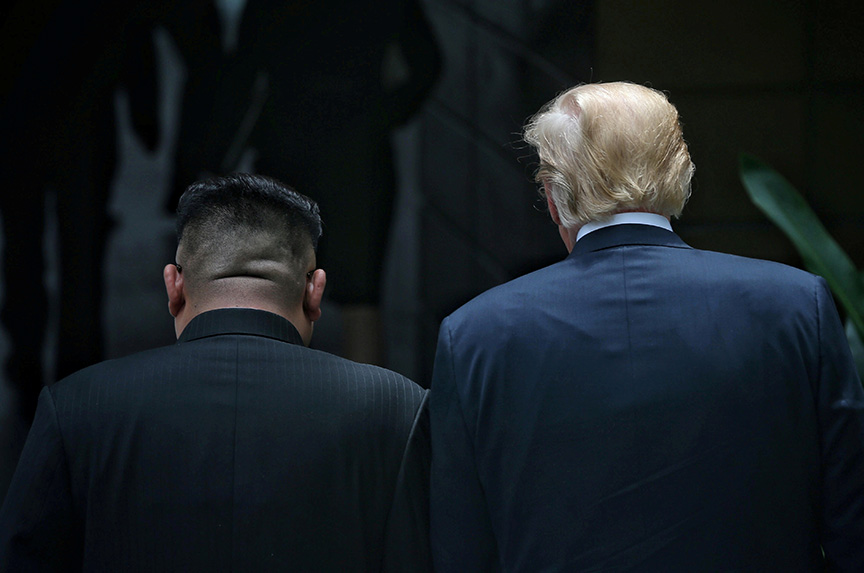 “I think we will have a terrific relationship,” US President Donald J. Trump (right) told North Korean leader Kim Jong-un when they met at the Capella Hotel on Sentosa island in Singapore on June 12. (Kevin Lim/The Straits Times via Reuters)

US President Donald J. Trump’s historic summit with North Korean leader Kim Jong-un in Singapore on June 12 is a diplomatic win for the United States, but whether it is a strategic victory will depend on the implementation of the joint agreement signed by the two leaders, according to Michael Morell, an Atlantic Council board member and former acting director of the Central Intelligence Agency.

Morell discussed the outcome and implications of the summit in an interview with the New Atlanticist’s Ashish Kumar Sen. Here are excerpts from the interview.

Q: What are your thoughts on the outcome of the Trump-Kim summit?

Morell: It is a diplomatic win for the United States. Whether it turns out to be a strategic win depends on what happens going forward.

I say it is a diplomatic win because this was the best of the three possible outcomes from the meeting of the two leaders. What we got was a set of objectives and a stated willingness to move forward in the pursuit of those objectives. That outcome was much better than the other two possible outcomes, which were a breakdown in the talks or the United States giving away too much too early.

A really important point here is that the negotiations going forward could go wrong at any one of those different junctures. Indeed, I think the first step—North Korea’s full declaration of their nuclear weapons and their nuclear weapons’ production capabilities—is going to be a huge test. The question is, will they declare everything, including those things that they have hidden from us in the past? This is a place where things have gone wrong in the past.

So, in terms of what they agreed to in Singapore—nothing new.  That’s another way of saying the proof is going to be in the pudding—in the concrete steps that they are going to be willing to take going forward.

Q: Complete denuclearization of the Korean Peninsula is mentioned in the joint statement. Is there an agreement on both sides about what this actually means?

Q: Is there clarity on how denuclearization will be achieved?

Morell: Not at all. There was no statement about the next meeting—when it is going to be, where it will be, or anything.

The other thing that stood out to me was there was no mention of ICBMs in the agreement—that’s not good—and there was no mention of North Korea’s chemical and biological weapons programs in the agreement—and that’s not good either. What I had hoped to see was a North Korean statement about getting rid of all of its weapons of mass destruction, not just nuclear, and a willingness not to move forward with its long-range missile program.

Q: The South Koreans appear to have  been caught off guard by Trump’s announcement to suspend joint military exercises between the United States and South Korea. What could be the implications of this decision on the US-South Korea alliance?

Morell: Let me say three things here.  First, I think that our agreement to suspend military exercises between the United States and South Korea was a good thing. There will be a lot of people in national security establishment who will push back on that, particularly military folks. But I think it is actually a good thing. The reason I say that is because the North Koreans have now for six months suspended their missile and nuclear tests. So, for us to give them something in return for continuing to do that makes a lot of sense to me. It also makes a lot of sense in the context that military exercises are something that we can start again very, very quickly, if we need to do so. It is reversible. If this doesn’t go well we can start up those exercises tomorrow.

Second, the US suspending its military exercises with South Korea on the peninsula was not in the agreement. And, that is a big caveat here. It raises an important question:  what else did we or they agree to that is not in the document? We don’t know the answer to that right now and maybe more will come out in the days ahead. But that’s a huge caveat here on how to think about what happened in Singapore.

Third, the decision to suspend joint military exercises did catch the South Koreans off guard, but I think at least the South Korean political establishment is 100 percent fine with this. Again, maybe the South Korean military doesn’t like it because they see the importance of the exercises to military readiness. But, I think the political leadership in South Korea is very happy with the outcome of this summit, they are very happy that there will be negotiations going forward and that the talk of a pre-emptive US military strike has, at least for now, gone away.

Q: What message are US allies—South Korea and Japan, in particular—getting from this summit?

Morell: On the surface, I think all the key players here—the South Koreans, the Chinese, the Japanese—are reassured that there is not going to be a military conflict anytime in the near future.  Everybody is savvy enough to understand, though, that the proof of whether or not this summit will pay off really lies in the tough negotiations going forward.  I think they are happy about where we are at the moment and the road we are on, but they are wary of all the potholes in that road.

Q: What are the implications of a good Trump-Kim summit and a thaw in inter-Korean relations? Will it make it harder for the United States to keep up the pressure of sanctions on North Korea?

Morell: Two things will happen going forward on sanctions. One, it will be extraordinarily difficult, as long as the North Koreans are negotiating and not testing missiles and nuclear weapons, to impose new sanctions on North Korea.

Ashish Kumar Sen is deputy director of communciations, editorial, at the Atlantic Council. Follow him on Twitter @AshishSen.