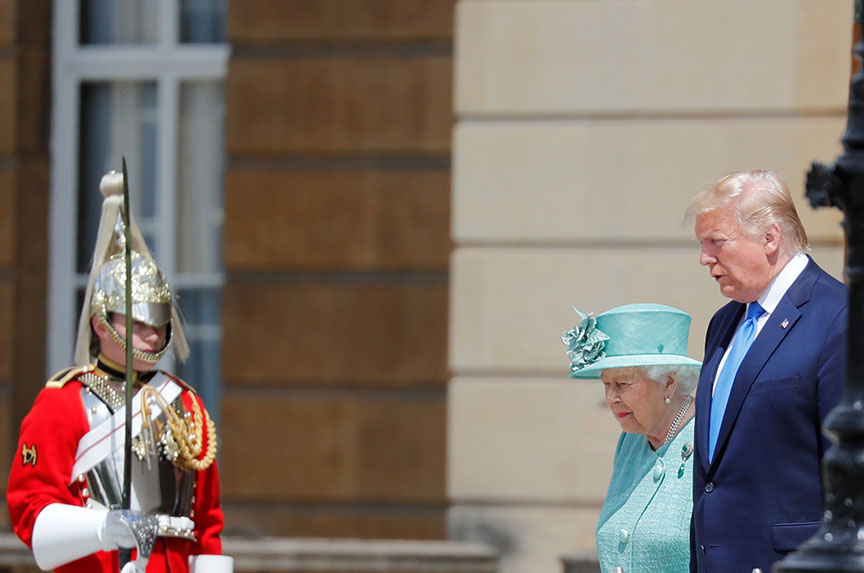 US President Donald J. Trump’s state visit to the United Kingdom this week was always going to be controversial. His approval ratings in the UK are not as bad as in other countries of the European Union, but his divisive and disruptive character meant that a sizable minority questioned whether he deserved full state visit honors almost a year after he was hosted by Queen Elizabeth II.

Timing also became an issue, since by the time of the visit Theresa May, who originally conveyed the invitation two years ago, had become a lame duck prime minister. Moreover, Brexit, of which Trump is a big supporter and which was due to have taken place by March 29, remains unresolved and hugely divisive for both public opinion and politicians.

There was also understandable concern that the president’s Twitter impulses, and habit of giving interviews to his friend Rupert Murdoch’s newspapers on the eve of his visits, might again cause political embarrassment.

In the event, the visit so far has gone better than expected. Protests have been modest and well-behaved. The newspaper interviews caused frissons as Trump appeared to endorse two of the candidates in the race to succeed May, but did not trouble 10 Downing Street. Jeremy Corbyn, the leader of the Labour opposition, boycotted the queen’s banquet (but still asked—unsuccessfully—for a meeting with the president) and Trump continued his long-running spat with the mayor of London, Sadiq Khan.

But at Buckingham Palace he respected all the rules of protocol and was clearly bowled over by the pageantry and the warmth with which he and his family were received by the queen and the other royals. He delighted his British hosts by declaring that the UK and the United States had “the greatest alliance the world has ever known.” He paid May handsome compliments as she prepares to stand down on June 7 as leader of the Conservative Party (but not as prime minister until members have chosen her successor); and he again said he was ready to agree a far-reaching free trade agreement with the UK once Brexit actually happens.

With May about to leave office, this was not the occasion for consequential discussion, let alone agreement, on some of the difficult policy issues that divide the UK and US governments, like climate change, trade, Iran, and how to manage technological cooperation with China. Perhaps for that reason, there was scope for polite disagreement rather than table-thumping, and thought about how the two governments might work together more effectively in the future.

Underpinning it all was the queen’s message of common values and interests exemplified by the 75th anniversary later this week of the D-Day landings in Normandy—the most significant common military endeavor ever undertaken by two countries and their allies.

Nor will the White House have missed the queen’s message of strong support, in the face of Trump’s instinctive unilateralism, for the international institutions built by the United States and the UK after the war in order to preserve those values and interests, and to keep the peace.

All told, when the dust settles, it is likely to feel like three days well spent.

Peter Westmacott is a distinguished ambassadorial fellow with the Atlantic Council’s Future Europe Initiative. He is a former British ambassador to the United States.