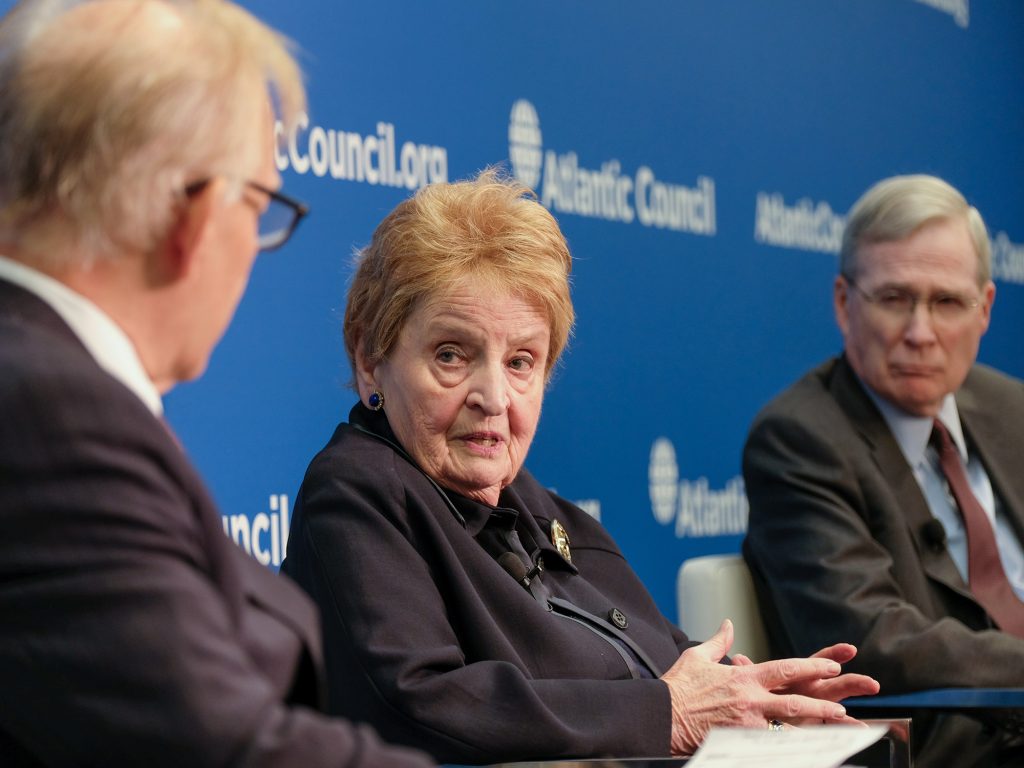 While many nations have seen new levels of peace and prosperity under the rules-based order that the United States and its allies built in the wake of the Second World War, “not everybody accepts those principles and values that have been the foundation of that system,” according to former US National Security Advisor Stephen J. Hadley. The challenge for the United States in the 21st century, Hadley continued, is to “revise, adapt, and revitalize,” this international system, while building global support for the central tenets of democracy and freedom that underpinned the relative peace of the last half century.

The United States faces an uphill battle, however, as authoritarians abroad question those very principles, as detailed in the Global Risks 2035 Update: Decline or New Renaissance, a report by Mathew J. Burrows, director of the Atlantic Council’s Foresight, Strategy, and Risks Initiative in the Scowcroft Center for Strategy and Security. Burrows warns that the increasing power of authoritarian regimes—chief among them China—threatens to bring back the great power competition that created so much destruction during the first part of the 20th century.

Strength comes from being part of an international system of which you can say something about how it is run.

To reverse this trend, a new strategy to revamp the international rules-based order is needed, and is the subject of another new Atlantic Council report: Present at the Re-Creation: A Global Strategy for Revitalizing, Adapting, and Defending a Rules-Based International System. In this report, Atlantic Council Senior Fellow Ash Jain and Scowcroft Center Deputy Director Matthew Kroenig lay out an actionable strategy for global policy makers to transform the international system—based on the fundamental values of freedom and democracy.

Albright and Hadley argued that the first step toward this transformation of the international system is to convince the American people—many of whom have become disillusioned with globalization and US commitments overseas—that the values the United States advocates and protects around the world are worth sacrificing for, and that the country should be a global leader again, as it once was. But that, as Hadley explained, is going to be a hard ask: “We have a fractured politics that isn’t addressing issues we’ve been struggling with for two or three decades, whether it’s immigration [or] entitlements… [and] we’ve produced economic growth, but not inclusive economic growth…I think we’re going to be hard-pressed to convince Americans to recommit to global leadership unless those grievances and real objections are addressed.”

The United States must also convince its fellow nations of the benefits of a strengthened international system. Many foreign countries share concerns that their sovereignty is undermined by the international institutions that undergird the rules-based order. But this, as Albright argued, is misguided: “Obviously there are some responsibilities of a leader of a country to protect his territory, people, and way of life. But in order to do that one has to recognize that there are other forces [and] countries that are needed to do that, and you have to give up a little piece of that sovereignty.”

“I think the art of statecraft is trying to figure out how much to protect the sovereignty, and how much to recognize that one’s citizens are safer, or better off, if you give away a piece of it… Strength comes from being part of an international system of which you can say something about how it is run,” she continued.

People are demanding accountability from their governments…This is a perfect time to be launching this effort to renew our vows to our democratic principles.

In the face of dissent abroad and disaffection at home, Albright and Hadley are duly concerned that the United States will continue to retreat from global leadership, giving away hard-won power to authoritarian leaders that are happy to take it. As Albright pointed out, the Chinese government is “filling the vacuum” left by a retreating United States, “and where they aren’t filling the vacuum, the Russians are filling the vacuum.” Albright also drew attention to China’s Belt and Road Initiative that seems to expand Beijing’s global reach by the day. “I keep saying the Chinese must be getting very fat, because the belt keeps getting larger and larger, and they have made all kinds of relationships of dependency on that,” she said.

But Hadley argued that the United States is beginning to realize the potential ramifications of its absence on the world stage, especially as Beijing flexes its muscles. “If you talk to Americans, they will say China is an economic predator, a military threat, a geopolitical rival, and an ideological competitor of ours,” he explained. According to Hadley, “[Chinese President] Xi Jinping made a strategic mistake here; he decided to put aside what had been China’s policy about ‘hide your strength and bide your time,’ and became much more assertive diplomatically, economically, [and] militarily. He thought China’s time was now…What it’s done is awaken a dragon, and the dragon wasn’t China, it was the United States. And we are now alive to the competitive challenge.”

The United States must now restructure a rules-based order that will accommodate these growing authoritarian powers, while also reaffirming Washington’s core values and strengthening the world’s community of democracies. David Ignatius, a columnist from the Washington Post who moderated the discussion, asked how the United States could become a more plausible leader for an international alliance of democracies. Hadley put it simply: “Well, we need to lead it, because if we don’t lead it, it will not happen.”