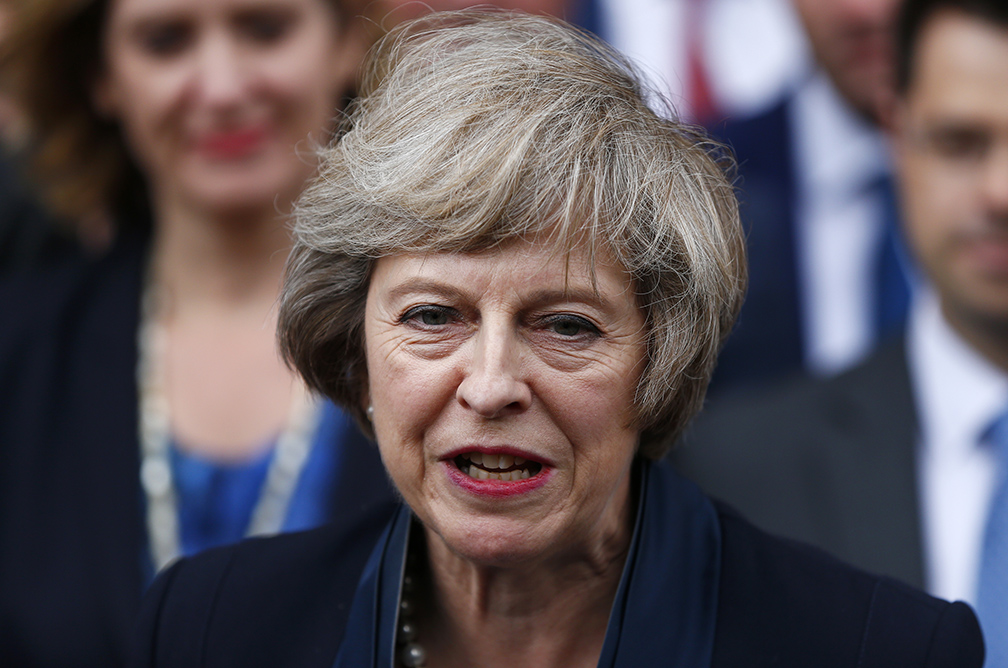 Theresa May speaks to reporters outside the Houses of Parliament in Westminster, central London, on July 11 after being confirmed as the leader of the Conservative Party and the United Kingdom’s next prime minister. (Reuters/Neil Hall)

British Prime Minister Theresa May unveiled on May 21 a supposed new deal for Britain’s departure from the European Union that looks remarkably like the deal Parliament has already rejected three times.

There were some important differences, the most notable of which is that May was outlining an actual government bill to implement Brexit whereas previous votes were rejections of the specific Withdrawal Agreement which the prime minister agreed with the European Commission last November.

There were also some olive branches to the opposition Labour Party, notably concerning options for Parliament to consider two key demands ­– a customs union with the European Union (EU) and a referendum on any deal approved by Parliament – made by Labour negotiators in recent cross-party talks. She also repeated previous pledges when she said the bill would include provisions to align workers’ rights and environmental protections with those of the EU.

But that was the catch. They were not firm commitments that the government would include either a customs union or a second referendum in its legislation; it was only that Parliament would be allowed to consider these issues. But in order for Parliament to discuss them, it would first have to vote in favor of the bill when it was formally introduced (curiously, at its so-called Second Reading) in order to enable it to proceed to the stage where substantive discussion could take place and amendments proposed.

And even then, for Labour, there would be no guarantee that there would be a parliamentary majority that would ensure either of these outcomes. Parliamentary arithmetic makes it increasingly likely that the new deal – which May stressed was aimed at “seeking common ground in Parliament” – will continue to constitute her nemesis.

To start with, her timing was unfortunate, since her announcement came on the day that British Steel – a historic name in British industry but long shorn of its former grandeur – said it needed £30 million in emergency government aid to avert bankruptcy, with one steelworker, union official Martin Foster, saying: “We could be the first casualties of Brexit, but I doubt that we will be the last.”

Moreover, every overture May makes to try to win over support from Labour MPs is reducing support in her own party, not least among the increasingly strident wing of her party prepared to leave the EU without any agreement at all.

Indeed, initial reactions were that May had actually hardened attitudes on all sides, with both Labour leaders and Labour MPs from pro-Leave areas saying they did not think she had gone far enough, while Conservative Party rebels were vocal in their own rejection of her offer.

Labour leader Jeremy Corbyn declared: “It’s basically a rehash of what was discussed before and it doesn’t make any fundamental moves on market alignment or the customs union or indeed protection of rights.”

“This is not the permanent customs union that we need,” commented Labour Shadow Chancellor of the Exchequer John McDonnell.

Jacob Rees-Mogg, who heads the Conservatives’ biggest “No Deal” faction, the European Research Group, said that May’s proposals were “worse than before” while former Conservative Party leader Iain Duncan Smith said it left the EU “firmly in control of our destiny.”

May’s plan is that her bill will be presented to Parliament in early June, possibly on June 7, just after US President Donald J. Trump’s state visit and her own planned visit to Normandy for the 75th anniversary of the D-Day landings on June 6.

But within hours of her speech, there were whispers around Westminster as to whether the prime minister would even survive that long; that if Conservative Party managers came to the conclusion that there was no hope of securing a positive vote for the Second Reading then, in the wake of an expected catastrophic collapse in the party’s vote in the European elections on May 23 (it is currently polling in single digits), she would have to quit immediately in order to allow a successor to try to clean up the wreckage.

If anything, May’s effort to bring more clarity to Brexit looks to be making the subject foggier than ever. She didn’t offer a full customs union, only consideration of a temporary customs union for goods. But how long might that last, particularly since May’s days are numbered?

The prime minister has already said she will hold talks on a timetable to choose her successor once she has introduced this bill. This means that opposition politicians, particularly those who are opposed to Brexit outright or who wish to ensure close economic ties with the EU after Brexit, will not wish to commit themselves at this stage since, in all likelihood, May’s successor as party leader and, almost certainly, as prime minister, will come from that wing of her party that most desires Brexit, and may well favor leaving the EU without a deal.

On the assumption that her bill fails to secure a Second Reading, May will – if she hasn’t already – be forced to step down. But what happens then is very uncertain. In the absence of a bill, there is no formal parliamentary mechanism either to prevent a new prime minister taking Britain out of the EU without any deal, or to arrange a fresh referendum to see whether the British people approve or disapprove of the government’s action.

In practice, however, things may turn out very differently. The months of furious Brexit debate in Parliament have seen longstanding conventions overturned and the speaker, John Bercow, take a very proactive stance to ensure that Parliament can have substantive votes on key issues.

So the bottom line on May 21 is that May will lose her vote in early June, that the timetable for the elections of a new Conservative Party leader will be announced a few days (or even hours) later, and that parliamentary disputes will increasingly focus on a binary choice: leave without a deal or hold a referendum to see whether the British electorate has had second thoughts on whether it wants to remain in the EU.

But given the extreme volatility of the situation, this writer reserves the right to come to fundamentally different conclusions at any point between now and October 31, the date when the EU’s current extension for Brexit to be decided comes to an end.