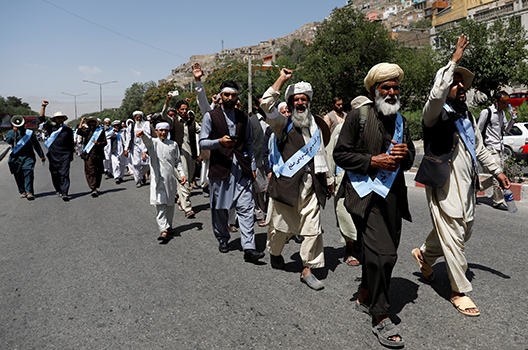 Challenge posed by ISIS affiliate must be addressed

US Secretary of State Mike Pompeo’s decision to appoint Zalmay Khalilzad as his Afghan envoy, tasked with mediating between the Taliban and Kabul, might help bring Afghan President Ashraf Ghani’s government and at least some factions of the Taliban together. Khalilzad has walked a fine line between Afghanistan’s many ethnic groups in the past. He helped effectively form the country’s first post-Taliban government and organized the country’s first post-Taliban elections.

The current situation in Afghanistan, however, is very different from that of the 2000s. Today, the Taliban have gained control of much of the country. Kabul remains out of insurgent hands, but it is nevertheless overwhelmed by deepening rifts within the political establishment.

Both the Taliban and the Afghan government have spent more time and energy jockeying for position in negotiations than in actually negotiating. Whenever either side has strengthened its position, it has rejected the idea of negotiations in favor of more fighting. But now, the Taliban and Kabul aren’t just fighting one another. Both sides must consider the threat posed by the Islamic State-Khurasan (IS-K).

For several years, experts have warned that ISIS can recruit inside Afghanistan. IS-K derives its name from Khurasan Province, a historic name for a region that included most of modern Afghanistan as well as much of Central Asia and parts of modern Iran and Pakistan. IS-K’s existence came to light in 2015 when the Islamic State named Hafiz Saeed Khan, a senior commander in the Tehrik-i-Taliban Pakistan (TTP) and former Pakistani Taliban chief of the Orakzai District of Pakistan’s Khyber Pakhtunkhwa, as its head.

At first, the Taliban denied ISIS’s existence, calling it a “pretext” for the United States and the CIA to continue the occupation of Afghanistan. In 2016, Taliban spokesperson Zabiullah Mujahid rejected the idea that IS-K could be a threat to Afghanistan, saying that “ISIS is neither welcomed in Afghanistan nor are ISIS’s ideas accepted by our nation.” However, IS-K’s successes, and its brutality, have since taken everyone, including the Taliban, by surprise. Many, including the Taliban, have condemned the group’s actions.

The Taliban should not be considered a classic organization in terms of its discipline and structure. Today the Taliban is a multi-factional group, with some factions at odds even with each other. In a country with an extremely strong tribal structure, such as Afghanistan, it can be difficult to reconcile differences when there is blood involved. But it is equally possible to use tribal ties to help reach a settlement.

The case of Gulbuddin Hekmatyar is a classic example. Hekmatyar, a former warlord and the last prime minister of Afghanistan before the rise of the Taliban, escaped to Iran after the Taliban took power in 1996. He then announced his support for the Taliban just weeks before they were ousted from power in 2001 and was expelled from Iran in 2002 for vowing to fight the newly formed Afghan government. Hekmatyar subsequently worked with the Taliban, then separated from them, and at one point even called on his followers to support IS-K in its clashes with the Taliban. However, after changing his position so many times, he eventually reached a peace deal with the government in Kabul in 2017.

So far, perhaps due to linguistic or cultural differences, IS-K’s operations in Afghanistan have been more muted than ISIS’s operations in Iraq and Syria. IS-K leaders have not emphasized the restoration of the caliphate, for example, and despite the group’s recent struggles in Iraq and Syria there’s been no apparent move to shift its central command to Afghanistan. IS-K’s aim seems to be initiating a religious war, indicated by its targeted bombing of Shia gatherings and mosques.

Unlike IS-K, the Taliban has generally not specifically targeted Shia and other religious minority groups. However, that does not mean its feelings toward those groups are positive. During the period of Taliban rule in the 1990s, Shia Hazaras experienced enormous brutality and discrimination. There were extreme cases of violence, such as the 1998 massacre of thousands of Hazara men and boys as revenge for the killing of thousands of Taliban fighters the previous year in fighting over the city of Mazar-e Sharif.

One of the biggest challenges in combating IS-K is that little is yet known about its operations, its strength, or its command structure. In part this is due to the propensity for other players in Afghanistan to deliberately either exaggerate or underestimate IS-K’s presence in order to serve their own political aims. Where it has been relatively easy to identify the Taliban’s main foreign backers, IS-K’s support has been harder to track. The group’s motives are difficult to ascertain since its members and sympathizers seem to be attracted variously by financial incentives, the group’s ideology, and even feelings of revenge. IS-K’s operations are not necessarily assigned from a central command but seem to be mostly spontaneous, which creates additional challenges as far as degrading its capabilities.

The brutality of IS-K’s operations, which has exceeded the Taliban’s, presents another complication. The effectiveness and deadliness of IS-K attacks have caused Afghan citizens to partially lose confidence in Kabul’s ability to protect them. The danger is that if IS-K appears unbreakable using its cash distribution, that could break the morale of the Afghan security forces and create an irreversible spiral of violence.

There is one positive aspect to Afghanistan’s situation. Unlike in Iraq or Syria, there have never been separatist tendencies in Afghanistan. For all of the country’s ethnic and religious diversity, Afghans of all backgrounds introduce themselves as Afghan citizens and never by their ethnic or religious background.  So far, the majority of Afghans have rejected the brutality of IS-K. This fact, if combined with cutting off IS-K’s resources and reaching some lasting agreements with the Talban, could be the last hope in bringing calm to Afghanistan.

Fatemeh Aman is a nonresident fellow in the Atlantic Council’s South Asia Center. Follow her on Twitter @FatemehAman.