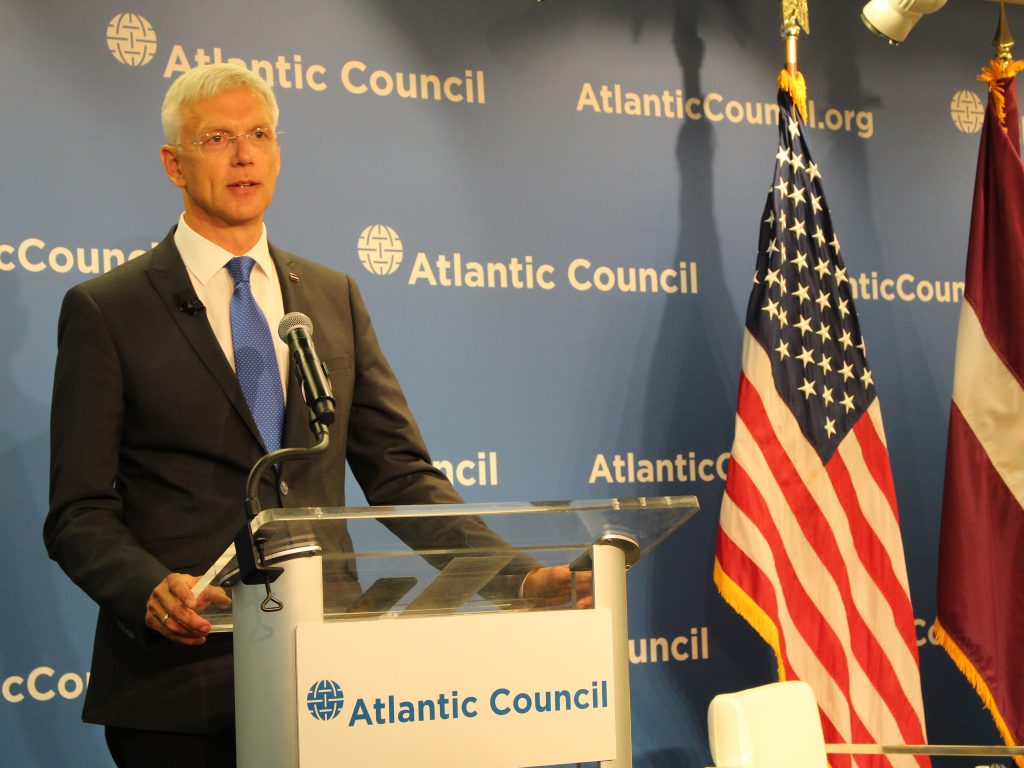 Amidst rising discord between the United States and Europe over trade, financial contributions to NATO, and the threat from Iran, US policy makers should stop viewing Europe as a competitor, but rather as a friend whose prosperity and unity helps the United States, Latvian Prime Minister Arturs Krišjānis Kariņš said on July 10.

Kariņš’ visit comes just days after the Trump administration announced it was increasing the number of EU products it may potentially slap tariffs on by $4 billion to about $25 billion total. These potential new tariffs—which relate to an ongoing dispute over US subsidies to aerospace company Boeing and European subsidies to its counterpart Airbus—would follow existing US tariffs on EU aluminum and steel products from May 2018 and the continuing threat to place new tariffs on European cars and car parts over Washington’s frustrations with slow moving trade talks with Brussels.

In July 2018, US President Donald J. Trump said he thinks “the European Union is a foe” of the United States, especially considering “what they do to us in trade.”

Kariņš pushed back on Trump’s narrative of economic competition with the European Union, arguing that the prosperity of the European Union is in the United States’ interest, especially as Washington seeks to counter China’s unfair economic practices and reform the global multilateral trading system at the World Trade Organization (WTO). “There is much to be gained from close cooperation between the European Union and the United States, whether it has to do with World Trade Organization rules [or the] rules of trade,” he said. “Your economy and our economy in Europe [have] prospered because of free trade.”

“When you combine the European Union’s market with the US market, you have clear dominance in world affairs,” Kariņš argued, which will be of increased importance in the next decades as it is determined “who will set the rules of future trade and future [international] relations.”

Alluding to the drive by former Trump adviser Steve Bannon to weaken the European Union, Kariņš maintained that “the advantage that the United States has with a strong EU is incomparable to what the United States has with a divided EU.” Rather than a strong partner to tackle global challenges and confront Russia and China with, he added, the United States would essentially be left with a collection of weaker partners who could not offer Washington tangible assistance. If the European Union did not exist, the United States would likely find itself isolated on the world stage, he said, asking “who else has a similar way of approaching trade, and who else views democracy as a good system?”

Kariņš said he was in Washington to specifically to attract interest in the Latvian economy. “I want stronger Latvian-US relationships through increased trade,” he said. “I am looking for more US investment into our economy.” He argued that smaller Latvian firms can help large US companies with specialized projects and provide a gateway into the larger European market.

In addition to trade, Europe has also been under fire from the Trump administration for not spending enough on their own defense, which Trump argues has placed an unfair financial burden on the United States in maintaining NATO. Kariņš acknowledged that Trump has a serious point in his complaints, saying that “our security is through collective security, but we understand that you cannot just expect someone to help you, you have to help yourself.” The Latvian prime minister pointed out that his country hit the desired 2 percent of gross domestic product defense spending goal in 2018 and that all European NATO members are making strides to increase their contributions.

Kariņš explained that his country is focusing on building up both its military and civilian capabilities in order to deter a potential attack from Russia. While NATO troops from Canada, the United States, and other allies are stationed in Latvia, he acknowledged that this might not be enough to deter a full out conventional attack from Moscow. He said his country was adopting a “porcupine” strategy to focus on making a Russian military invasion as costly as possible, a concept examined by Dr. T.X. Hammes in his Atlantic Council issue brief “The Melians Revenge.” The goal, Kariņš was to give Moscow pause about a conventional attack and “to make sure that taking our country is not worth it.”

While Latvia has surpassed the 2 percent spending goal, Germany in particular has drawn the ire of the US administration for only agreeing to reach 1.5 percent of GDP on defense spending by 2024. Trump said in April that “Germany, to be honest, is not paying their fair share,” while US Vice President Mike Pence told the NATO Engages event on April 3 that “Germany must do more.”

Kariņš pushed back on this criticism of Berlin, saying that Germany’s troubled history with military might must be taken into account when judging them for defense spending. While the United States and other European countries have less strong feelings about the Second World War, he argued, “in Germany that historical memory is much more active,” especially among the political class, which remains hesitant about boosting military spending. Kariņš countered criticisms that Germany is free-loading or being cheap with the United States by pointing out that “the Germans spend a heck of a lot of money on development aid. The Germans are certainly not averse to spending money.” But the “complete aversion to military might” in Germany is a legitimate reason to remain cautious about military capabilities, Kariņš maintained.

Kariņš believes the US-EU bond will continue to be strong, despite the numerous challenges facing the relationship. When Atlantic Council Distinguished Fellow Frances Burwell highlighted the long list of disagreements between Brussels and Washington on issues such as Iran, China, and climate change, Kariņš countered that “differences of opinion are not abnormal.” As an alliance of democracies, he explained, “these sorts of disagreements may come with change of administrations” on both sides. They are simply “artifacts of the present and they are always liable to change.”

The key to a healthy relationship, however, will be continued reminders that Europe and the United States are better off together, Kariņš argued. “Peace and prosperity are something to be protected—we need to remind ourselves of that again and again,” he said. Deep cooperation on economics, security, and diplomacy can make both sides of the Atlantic wealthier and safer, Kariņš maintained, which should naturally be seen as “a win-win. I don’t see the lose in that.”