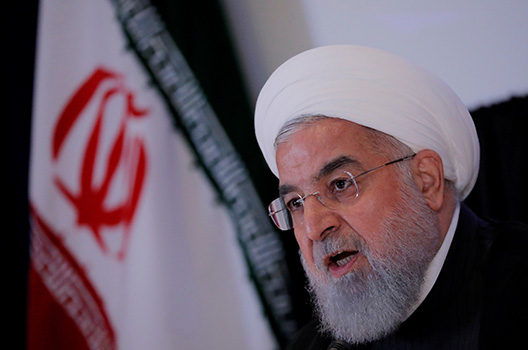 Iran's President Hassan Rouhani speaks at a news conference on the sidelines of the 73rd session of the United Nations General Assembly at U.N. headquarters in New York, U.S., September 26, 2018. (REUTERS/Brendan Mcdermid/File Photo)

By reimposing sanctions on Iran, the United States is “simply trying to squeeze more out of the Iranians using a slightly lesser tool—sanctions functionally equivalent to what we had before without the corresponding political support,” according to Daniel Fried, a distinguished fellow at the Atlantic Council.

US President Donald J. Trump’s administration on November 5 reimposed all of the sanctions that were lifted by Barack Obama’s administration as part of a 2015 deal over Iran’s nuclear program. Trump pulled the United States out the nuclear deal, officially known as the Joint Comprehensive Plan of Action (JCPOA), in May.

US Secretary of State Mike Pompeo called the reimposition of sanctions and addition of new measures “an unprecedented campaign of economic pressure” on Tehran, with the ultimate goal “to starve the Iranian regime of the revenue it uses to fund violent and destabilizing activities throughout the Middle East.”

The newly reinstated sanctions will target Iranian shipbuilding and shipping, oil production and sales, and banking, among other sectors. Although the new sanctions are fewer than those issued by Trump in an executive order in August, “they are among the most powerful as they expand the primary blocking sanctions available for US designations and represent the bulk of the secondary sanctions on Iran,” according to Brian O’Toole, a nonresident senior fellow with the Atlantic Council.

Iranian President Hassan Rouhani promised that Iran would “proudly break the unjust sanctions” and argued that “what the Americans are doing today aims to put pressures on people—no one else—just on people and on other nations, other firms, other governments.”

Pompeo argued US sanctions “will accelerate the rapid decline of international economic activity in Iran” that began with the US withdrawal from the JCPOA. According to Pompeo, more than 100 countries have withdrawn from Iran since May or have cancelled future plans there, with Tehran also losing more than $2.5 billion in oil revenue.

While the sanctions are essentially the same that were in place before the JCPOA, the United States does not have the same international support it enjoyed in the years leading up to negotiations over the nuclear deal, according to Fried and David Mortlock, a nonresident senior fellow with the Atlantic Council’s Economic Sanctions Initiative.

The European signatories to the JCPOA—France, Germany, the United Kingdom, and the European Union—attempted to provide a shield from US sanctions for European companies doing business in Iran. This special purpose vehicle (SPV) is “an astonishing political statement by the Europeans that they stand with Iran on this issue” and a “political demonstration that the United States is isolated on the issue of Iran and the JCPOA,” Mortlock said.

Pompeo shrugged off the suggestion that Europe could undermine US sanctions, arguing that “European businesses have already made their decisions. They have decided not to do business with the Islamic Republic of Iran.” He warned companies around the world that “doing business with Iran in defiance of our sanctions will ultimately be a much more painful business decision than pulling out of Iran.”

Mortlock agreed that an SPV “really doesn’t do much of anything to shield European companies from sanctions,” nor would it have any impact on the use of the US dollar as Iran has been banned from dollar transactions for years.

More concerningly, if the reimposed sanctions simply bring the same “amount of economic harm that we had in 2014 pre-JCPOA—absent the political and diplomatic isolation that Iran felt at that time,” Mortlock asked, “why do we expect overall less pressure to get Iran back to the table for a much bigger and from Iran’s perspective a much more fundamental deal?”

Oil: Hitting Iran where it hurts

The Trump administration hopes that the reimposed sanctions will help squeeze Iran out of the oil market—a vital source of income which the United States claims Tehran uses to fund terrorism throughout the Middle East.

Ellen Wald, a nonresident senior fellow at the Atlantic Council’s Global Energy Center, said in an Atlantic Council conference call on November 5 that so far the new round of sanctions have only had a “fairly minimal impact on oil prices and the oil market” as markets “really have had a sense of what to expect and have been making preparations for the last month.”

The United States will be focusing on how to keep oil prices down throughout the next year—hopefully through increased production in other Arab Gulf states and the United States—in order to ensure that increased prices do not cancel out the projected fall in Iranian exports, Wald explained.

Special attention will need to be paid to where Iranian oil is going as Tehran has already attempted to disguise its oil tankers, switched off tanker GPS tracking, and tried to blend its oil with other foreign sources in order to get its oil on the market, said Holly Dagres, a nonresident fellow and editor of the Atlantic Council’s IranSource blog.

Pompeo announced that eight countries—China, India, Italy, Greece, Japan, South Korea, Taiwan, and Turkey—would receive special temporary waivers allowing them to continue limited business with Tehran, primarily in the oil trade. These waivers were necessary for “special circumstances and to ensure a well-supplied oil markets,” Pompeo explained. He pointed out that all of the countries that received oil exemptions have “already demonstrated significant reductions of the purchase of Iranian crude over the past six months.”

The squeeze had already had an impact, Wald reported, as “Iran has to offer discounts on its oil… [and] has been shipping its oil to China on its own tankers and paying the cost of insurance. That cuts into Iran’s revenue from its oil exports.”

Will the sanctions work?

While never explicitly saying so, the Trump administration clearly wants to see “either Iranian government capitulation to US demands and their agreement to reenter into negotiations… or for some kind of social upheaval or regime change,” Fried said.

At the very least, Fried argued, Washington wants “not simply to punish Iran, but to get them to change their behavior.”

Dagres remains skeptical that these sanctions will achieve this goal, though she said “there is a sense of naivete in the administration, that they assume that economic pain will lead to political gain, which essentially means regime change.”

These sanctions “are not the most punitive sanctions in Iran’s history. The 2012 multilateral sanctions regime led by the Obama administration was far more punitive,” Dagres pointed out, noting that many Iranians who have been alive since the disastrous Iran-Iraq War in the 1980s “have lived through far worse.”

Worse still, many of Iran’s hardliners who opposed the JCPOA in the first place have now been emboldened by the US withdrawal, Dagres explained. With the hardliners basking in an “I-told-you-so-moment,” Dagres warned, Rouhani could quickly lose political support and be replaced by a government even more fiercely opposed to US interests in the region.

David A. Wemer is assistant director of communications, editorial, at the Atlantic Council. Follow him on Twitter @DavidAWemer.