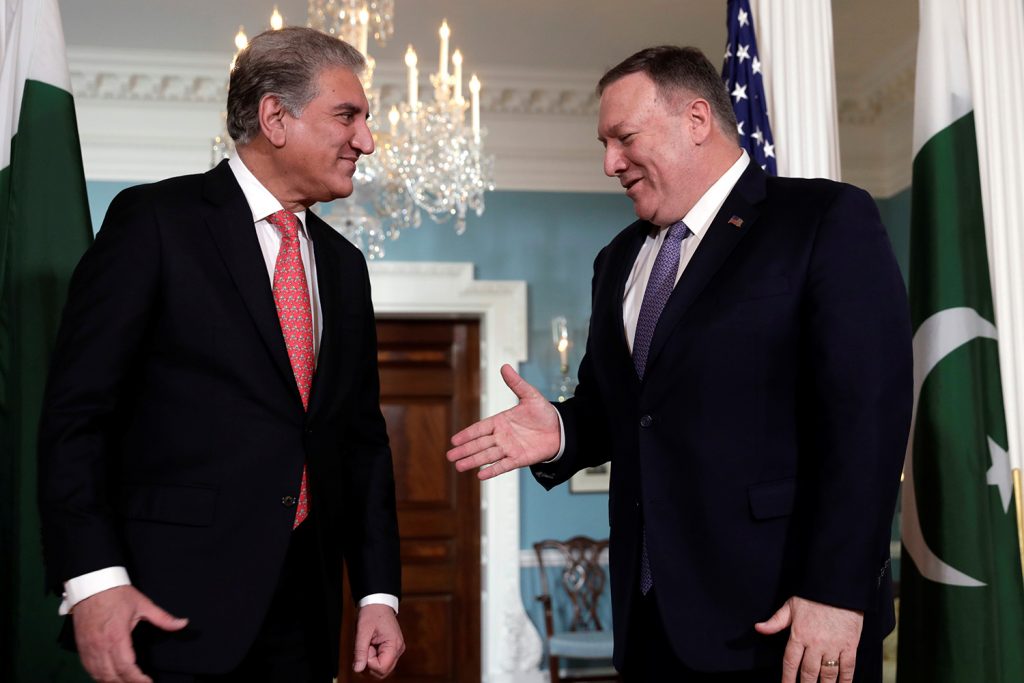 US Secretary of State Mike Pompeo (R) shakes hands with Pakistani Foreign Minister Makhdoom Shah Mahmood Qureshi before their meeting at the State Department in Washington, US, January 17, 2020. REUTERS/Yuri Gripas

“We can provide aid to help institutional building, so that a democracy can flourish,” US President George W. Bush told Pakistani President Pervez Musharraf in 2006, while he funneled $9 billion in military aid from 2001-2009 to Musharraf’s authoritarian military government. Washington has a long history of tacitly supporting the Pakistan Army’s unrivaled political power while publicly espousing the ideals of democracy and political pluralism. Such doublespeak only enables corrupt and unaccountable segments of the political and security establishments in Pakistan. It also impedes the United States from achieving its regional goals of democracy promotion and counterterrorism.

This contradictory policy is deeply rooted in the Washington-Islamabad relationship, going back to the earliest decades of Pakistani independence. US aid to Pakistan skyrocketed under Mohammad Ayub Khan, Muhammad Zia al-Haq, and Pervez Musharraf, its three military rulers who suspended the democratic process and placed Pakistan under martial law for extended periods. General Zia’s military rule of Pakistan (1977-1988) saw it enlisted by Washington as a conduit to arm religious extremists and directly support the Afghan heroin trade. Such policies were implemented to combat the Soviet military’s adventurism in Afghanistan, conducted under the guise of defending Afghanistan’s then communist government. Comparatively, Pakistan’s civilian-run democratic governments suffered significant reductions in US support, particularly in the 1990s when the Soviet Union’s collapse lessened the need for a Western proxy in South Asia.

This is not to suggest that US aid has never attempted to invest in Pakistan’s civilian democratic government, but such support is hollow. When push comes to shove, Washington intentionally utilizes the Pakistan Army’s unrivaled power and deals with it directly, consciously strengthening its unparalleled and repressive influence over Pakistani affairs. This sharp contradiction between policy and rhetoric strongly perpetuated Pakistan’s development as a hybrid military-civilian state which, even when not officially under martial law, struggles to resist the influence of the Army and security establishment in the democratic process. The overturning of Pervez Musharraf’s death sentence and General Qamar Bajwa’s three year extension as Army Chief are clear examples (among many) of this continuing power dynamic.

Enabled by contradictory signals from Washington, elements of the Pakistani government recognize Washington’s desperation for a major ally in South Asia and exploits it to their advantage. The Army and political establishment ensure that Pakistan has used this leverage to win a steady influx of development assistance to maintain Pakistan’s relatively open economy and highly corrupt government. This huge amount of Western development assistance was neither sustainably, transparently, nor consistently used to invest in and develop Pakistan. Aid instead was often squandered or manipulated by corrupt Army and political elites, complacent in the belief that they had the United States and its foreign assistance apparatus wrapped around their finger. US acquiescence to Pakistani military politics and corruption in exchange for strong security cooperation aligned with Washington’s anti-Soviet and, later, counterterrorism goals. It then solidified into a corrupt relationship that effectively serves the interests of neither country.

Changing this dynamic requires a complete revamp of the bilateral relationship, beginning with the United States designing a prudent approach to Pakistan and actually sticking to it. If Washington’s rhetoric espouses democracy, pluralism, and human rights, then its policies should reflect those ideals. Failing to do so has and will continue to embolden corruption, instability, and human rights abuses in Pakistan. These consequences further neither Washington’s counterterrorism operations and state building efforts in Afghanistan, nor the strongly intertwined struggle for democratic governance in Pakistan. Such policy also does not lend credibility to US democracy building and support in Iraq and Sri Lanka, nor does it bolster Washington’s “open and free” Indo-Pacific Strategy.

Should the United States finally choose to take and enforce a true pro-democracy stance, it could use political and economic leverage to support inclusive civilian government and much-needed Security Sector Reform (SSR) in Pakistan. Such reforms would also likely increase the effectiveness of organizations including the Financial Action Task Force (FATF) that have been working to combat corruption and illicit financing in Pakistan for some time. Ending its easily manipulated acquiescence to authoritarianism would also garner major international legitimacy in addition to political and economic leverage. With a more credible threat to revoke economic or military aid if human rights and inclusive political processes are not respected, Official Development Assistance (ODA) and security assistance packages could finally have real teeth to pressure the Army, Inter-Services Intelligence (ISI), and other security branches to submit to oversight and reform.

A rethink of US policy towards Pakistan would ideally be accompanied by a good faith Pakistani effort to implement structural reform. First, in conjunction with comparable US pressure on New Delhi, Islamabad should support high-level political engagement with Indian and Kashmiri leaders to open a real dialogue on longstanding geopolitical conflicts. Second, the political and security establishment in Islamabad must end its human rights abuses against political opposition, journalists, religious, ethnic, and gender minorities. Third, the Pakistan Army must be subject to oversight by the Pakistani people vis-a-vis an accountable democratic process. Fourth, development assistance packages should be invested sustainably and transparently into areas such as education, healthcare, and infrastructure. Finally, and perhaps with the help of international anti-corruption bodies, public sector theft that cripples state capacity must be addressed in a sustainable manner.

No one suggests that the changes suggested above would be easy. Indeed, analyses of seventy years of US-Pakistani bilateral relations are rife with like-minded calls for reform on both sides of the relationship, and a hard-learned cynicism about the prospects for either nation mustering the courage to enable real and lasting reforms. Yet, as the debate over Western acquiescence to authoritarianism in strategically important countries gains traction, Washington will soon have to reckon with what it actually stands for and is willing to enforce consistently. Only then can the United States effectively work with Pakistan. Otherwise, this bilateral relationship will continue to be bogged down with deception and false promises that serve the long-term interests of neither Islamabad nor Washington.

Harris Samad is a project assistant with the Atlantic Council’s South Asia Center.

The Pakistani courts strike back

The historic sentencing in December of former dictator and president Pervez Musharraf was a blow to the military’s image and directly questions its unequivocal authority over shaping Pakistan’s political life—even if it is only symbolic. In a rare streak of defiance, the country’s courts are pushing back against a traditionally powerful and popular establishment hoping to inch the country from a seemingly illiberal to a more liberal democracy.

As the South and Southeast Asian region faces increasing energy demand due to both population and economic growth, countries like Pakistan must meet that demand while facing and overcoming critical environmental and energy security challenges. How is Pakistan seeking to diversify its energy mix and establish more local and decarbonized power systems, and what are key opportunities for future government and foreign investment?

Pakistan can play a role in pushing the Taliban to participate in future talks, Imran Khan argues