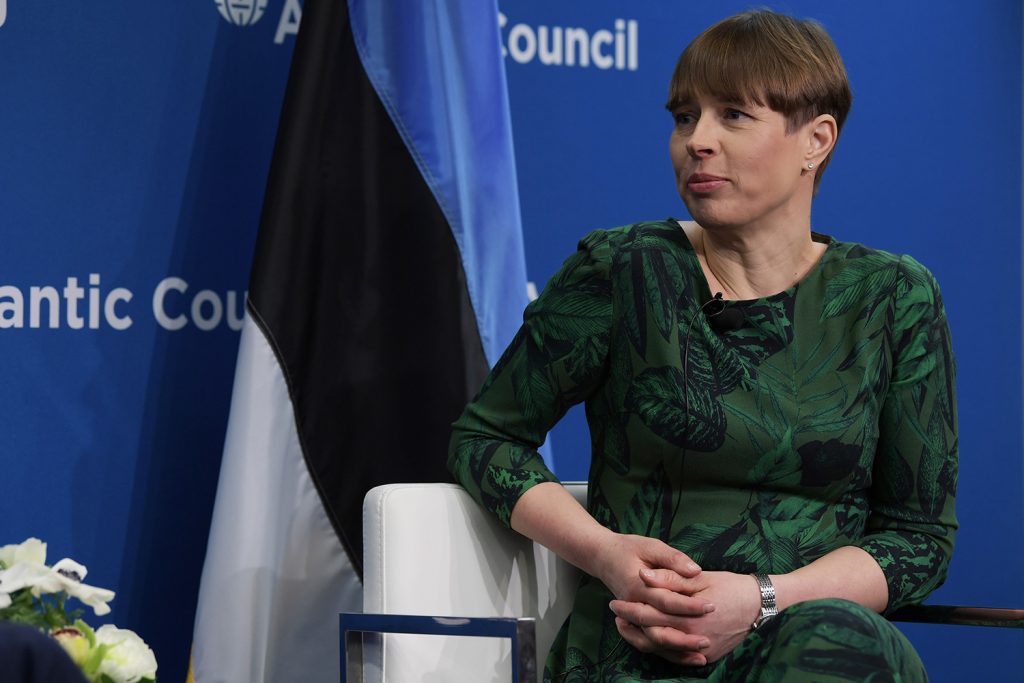 Estonian President Kersti Kaljulaid holds a discussion on "Completing Europe: Central Europe, the Three Seas Initiative and the Future of the Transatlantic Relationship" on March 04, 2020 at The Atlantic Council in Washington DC, USA. (Photo by Lenin Nolly/Sipa USA)

Now that an investment fund to fuel the development of stronger cross-border transportation, energy, and digital infrastructure links in Central and Eastern Europe has been launched, countries in the region “need to quickly decide” whether they want to participate before the opportunity vanishes, according to Estonian President Kersti Kaljulaid.

The Three Seas Investment Fund has been now been backed by an offer from the United States to invest up to $1 billion into the Initiative and the next Three Seas Summit will take place in Estonia’s capital, Tallinn in June. Kaljulaid argued that “everybody understands that the train has been built and is ready to leave the station.” Should governments in the region continue to delay paying into the Fund, they will risk missing out on potential projects and private investment, Kaljulaid warned at an Atlantic Council event on March 4. “If you are late, I am sorry but the cake [will] be eaten.”

The Investment Fund is part of the Three Seas Initiative, a forum of twelve EU member states between the Baltic, Adriatic, and Black Seas, working together to develop stronger cross-border infrastructure and connectivity projects to boost economic growth in the region. The Investment Fund was launched by Poland, Romania, and Estonia to help attract private investment for these projects, by fusing public fund commitments with private capital.

As the United States looks to confront Russian and Chinese economic and geopolitical competition in Europe and across the world, the Three Seas Initiative offers an opportunity to strengthen the economies of US allies.

The Investment Fund received a huge boost on February 15, when US Secretary of State Mike Pompeo announced that the United States would contribute $1 billion to the initiative through the International Development Finance Corporation. Pompeo described the decision as “a brand-new statement of our support for the sovereignty, prosperity, and energy independence for our European friends.” Kaljulaid explained that the US commitment is the latest sign from Washington that it wants to make sure Three Seas countries “have the full support of the United States in creating a region which is vibrant, quickly developing, and has access to capital.”

The Three Seas Initiative is so important, Kaljulaid argued, because in Central and Eastern Europe “a lot of opportunities for growth and development have not been exploited because these countries lack interconnections and the habit to work together among themselves. This potential is totally not unleashed.” Following the fall of the Iron Curtain, the region has made huge economic strides, but only “half of the gap has roughly been made up,” with Western Europe, she explained. For many countries in the region, she added, there has been heavy reliance on bigger Western European economic partners, such as France and Germany, rather than efforts to build connections with their immediate neighbors. “This region has not been seen as a common market [or] a common area” she noted, despite the fact that the region continues to enjoy nearly 3 percent growth in gross domestic product per year, much higher than their western EU counterparts.

General James L. Jones, Jr., executive chairman of the Atlantic Council, argued that the United States’ interest in the Three Seas Initiative “is a 21st century expression of the vitality and longevity of the transatlantic link.” In addition to the potential to boost prosperity among “some of America’s staunchest and closest allies,” the potential new infrastructure will help lessen the reliance of many of the region’s countries on Russia for energy supplies, making the project a “geoeconomically and geopolitically ambitious undertaking of tremendous importance,” he said.

While the Three Seas Initiative has been successful in focusing leaders’ minds on the need for cross-border economic connections in their region, a nearly $500 billion investment gap will need to be met to achieve the forum’s goals, Kaljulaid said, necessitating private capital. The Investment Fund will help meet this goal, she argued, by providing a reliable and attractive investment opportunity for private capital. Although the fund includes public funding from participating countries, it will be run by an independent fund manager free from political influence, Kaljulaid explained, allowing the Fund to finance projects based solely on merit.

The Fund also allows the region to market itself as a whole, instead of forcing leaders to pitch investors on their individual countries. With the Fund, Kaljulaid remarked, she could now “go to official visits to other countries and not waste time and energy” advocating for investment in Estonia, when “many people and investment funds are just too big” to be interested in just her country. The Fund now allows her to say that she represents a high growth region of nearly 100 million people.

Kaljulaid also dismissed concerns that the public-private nature of the Fund would dissuade investors who could fear being crowded out by future government investment, as she pointed out that EU funds—which form the vast majority of available public capital in the region—“are highly predictable for seven or normally ten years in advance.” She added that many of the Three Seas countries are “getting richer” and graduating out of the European Union’s “Objective 1” status, meaning that they will receive less funds through the EU’s cohesion policy. “European Union money is leaving the region, for reasons that are perfectly good. Private money will have the space.”

The opportunities for increased investment through the Three Seas Investment Fund are massive, Kaljulaid maintained, but countries must decide now whether or not to participate in the project if they want to reap the benefits. The United States and other investors have already signaled that they need to see the region put more skin in the game before increasing their support, meaning that the next months will be critical for the Fund’s success. According to Kaljulaid, it should be clear that “it is a now or never moment.”

“Secretary Pompeo’s announcement of $1 billion for the Three Seas Initiative is a powerful demonstration of America’s continued commitment to Europe,” stated General James L. Jones Jr. (USMC-ret.), executive chairman emeritus of the Atlantic Council, who attended the Munich Security Conference. “It reflects America’s recognition of the strategic significance of Central Europe as well Washington’s high confidence in the economic vitality and economic prospects of the Three Seas region.”

The United States is back in Central Europe, state department official says