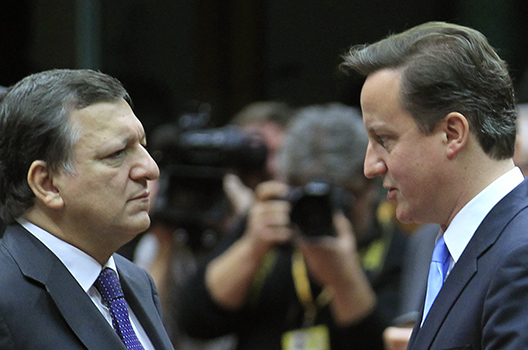 European Commission President Jose Manuel Barroso (L) talks with Britain's Prime Minister David Cameron (R) in front of Cyprus' President Demetris Christofias (front L) and European Council President Herman Van Rompuy (R) at a European Union summit in Brussels December 9, 2011. EU leaders agreed stricter budget rules for the euro zone on Friday, but failed to secure changes to the EU treaty among all 27 member states, meaning a deal will instead have to involve just euro zone states and any others that want to join. (REUTERS/Yves Herman)

The next week matters for European policy makers. EU finance ministers are meeting in Brussels on April 5 and 6. This will be followed by an emergency European Council summit on April 10 at which EU leaders will not only discuss Brexit, but also discuss the European Union’s position on negotiating a narrow free trade agreement with the United States. On April 12, European finance ministers and central bank governors will take part in important Group of Twenty (G-20) side discussions alongside the International Monetary Fund (IMF) and World Bank spring meetings in Washington. These leaders would have been focused on worrying signs of slumping global growth and trade tensions with the United States, but leaks to Reuters on April 3 suggest that policy makers are returning to another Brexit sore point: non-bank financial regulation.

The leaks show European policy makers are beginning to raise concerns regarding capital markets and non-bank financial institutions, most of which are located in the United Kingdom and the United States. They are also reviving a focus on euro-denominated securities, most of which are traded and settled in London.  It seems that Euro area policymakers have turned a corner and are preparing to create a framework for “future European financial sovereignty” as described in this speech today in Bucharest by the French central bank governor who is also a board member of the European Central Bank.

These issues last took center stage at the EU summit in December 2011. This was where and how Brexit began. Before migration issues, xenophobia, unicorns, Russian Internet trolls, extremist politicians, trade policy, Northern Ireland, the Withdrawal Agreement, indicative votes, and the customs union dominated the Brexit dynamic, British and EU leaders were locked in opposition regarding governance and sovereignty issues with respect to who exercises what kind of regulation over the euro and the financial system in which the euro trades.

Seeing these issues arise again sends strong signals about how toxic the Brexit situation has become in Europe. We are either seeing a clever last-minute European attempt to coerce compromise from the UK or we are seeing the last straw that will push the UK into a hard Brexit. How British policy makers react now will determine the policy trajectory, with potential spillovers to the transatlantic relationship.

How Did We Get Here? Context Matters Greatly

At the time of the December 2011 EU summit in Brussels, the global financial crisis had morphed into a Euro area sovereign debt crisis. Large banks and sovereign governments across Europe (Ireland, Portugal, Spain, Greece, Belgium, France, Cyprus, Italy, and Germany) teetered under the weight of non-performing loans and other economic woes. A newly elected British prime minister collided with a Euro area leadership struggling to save Europe’s common currency, economies, and banking systems. It wasn’t pretty.

By the time it was all over, five of the countries (Portugal, Ireland, Spain, Greece, and Cyprus) had received bailout packages from the IMF. Multiple new treaties were negotiated, signed, ratified, and implemented among Euro area governments focused on strengthening financial sector and fiscal policy oversight. The European Central Bank and EU-level financial regulators acquired significant new authority. The European Commission found itself often sidelined as Euro area governments reclaimed considerable decision-making authority they had previously delegated to Brussels.

As European leaders scrambled to save the euro, they found unity by resisting British policy priorities. Major media outlets (the Economist, the Financial Times, the Telegraph, Euractiv) provided the play-by-play through leaked documents and official statements. Three key dimensions drove the dramatic discord:

Fiscal Union Dramas: Faced with potential bank and sovereign bond defaults, the Euro area needed a mechanism to funnel financial support to hard-hit economies. However, the Maastricht Treaty expressly prohibited fiscal transfers within the euro area. Leaks to Euractiv indicated that then-EU Council President Herman Van Rompuy would propose a technical solution designed to embed the Maastricht economic policy targets into national constitutions rather than seek treaty changes. In order for that approach to succeed, a unanimous vote was needed at the December 2011 EU summit. The need for unanimity empowered the UK to negotiate in exchange for delivering political support to the eurozone.

Separately, continental policy makers led by France sought to impose a “financial transactions tax” on securities markets transactions. Finally, regulators globally were trying to define a policy regarding cross-border bank resolution. As the Lehman Brothers and AIG situations had illustrated, resolving large, complex, cross-border financial firms can create fiscal policy issues. UK policy makers refused to bail out these firms in the autumn of 2008. As of April 2019, no agreed international standards exist regarding cross-border resolution although a resolution agency has been created in Europe. The UK is not a member.

British Demands: Initially, the differences of opinion regarding technical financial services policy did not seem unusual. Civil law countries traditionally prefer to see intermediation through banks rather than through the capital markets favored by common law countries.

Additionally, Cameron sought to grandfather passporting rights into the EU for non-European financial firms located in London even as he sought to exclude UK firms from contributing to European deposit insurance systems. Finally, he challenged European Central Bank policy that would require euro-denominated transactions to be cleared at institutions physically located in the eurozone.

In other words, the UK arrived at the 2011 summit seeking to safeguard UK sovereignty over financial sector policy. Euro area heads of state arrived seeking to save their common currency. Their interests were not aligned.

Summit negotiations collapsed. The Euro area charged ahead, creating multiple new European treaties and institutions. The UK sued the European Central Bank at the European Court of Justice — and won — on the issue of location policy for central clearing. UK-EU relations deteriorated. In a referendum on June 23, 2016, a majority of British voters decided to leave the EU. The British government then triggered Article 50 of the EU’s Lisbon Treaty, which outlines the steps to be taken by a country seeking to leave the bloc voluntarily.

The issues that led to the historic break at the December 2011 summit resurfaced this week. This is not a good development. It signals a hardening of positions in Europe. The policy shifts are certain to stiffen some spines in London regarding Brexit.

The April 3 Reuters leaks indicate that EU finance ministers intend to tighten capital market regulation, with a particular focus on non-banks that are not headquartered in the EU. This is consistent with a civil law tradition that favors bank-centered intermediation over volatile capital markets. But it also delivers an implicit warning to the UK and the United States that European policy challenges will increase following Brexit.

Those policies take direct aim at the capital markets and firms that constitute a significant percentage of gross domestic product (GDP) in the United States and the UK. The leaked policies also take direct aim at large US and British firms that currently benefit from passporting terms that permit them to enter the EU financial services market from their offices in London. The leaks make clear that EU policy makers believe these practices expose the currency union to unacceptable financial stability risks. The solution will be regulation that reins in these economically significant entities after Brexit. The implication will not be lost on policy makers in London and Washington.

European policy makers are also poised to accelerate their efforts to exercise sovereignty over transactions denominated in their common currency, possibly on an extraterritorial basis.  Reuters reports that the Single Resolution Board, a central resolution authority within the Banking Union, has expressed interest to the European Parliament in expanding the perimeter of resolution authority to cover central clearing, including central clearing operations undertaken by investment banks.

The customs union and avoiding a physical border in Northern Ireland are important for many reasons. But the reality is that trade in goods constitutes only a small portion of the British GDP. The leaks from EU finance ministers imply that EU policy makers are taking aim at elements far more central to the British economy. It is not clear that raising these issues now creates any incentives for policy makers in London to compromise, because agreement on a customs union would not address the financial stability now in play once again.

UK policy makers have vigilantly protected their monetary policy and regulatory independence.  The UK never intended to join the single currency when it joined the EU. It refused to participate in major foreign bank bailouts emanating from the United States in 2008 and the Euro area from 2010 to 2012. Serious efforts by EU regulators to extend their standards extraterritorially into London could easily provide pro-Brexit policy makers in London one more reason to resist compromise.

Barbara C. Matthews is a nonresident senior fellow with the Atlantic Council’s Global Business & Economics Program.  She has served as a senior US government official in Brussels as the first US Treasury attaché to the European Union and in Washington as senior counsel to the US House of Representatives’ Financial Services Committee.  Follow her on Twitter @BCMstrategy.

For more on Brexit and the EU, please join us on April 12 for a conversation with EU Commission Vice President Dombrovskis from 9 a.m. to 10 a.m.