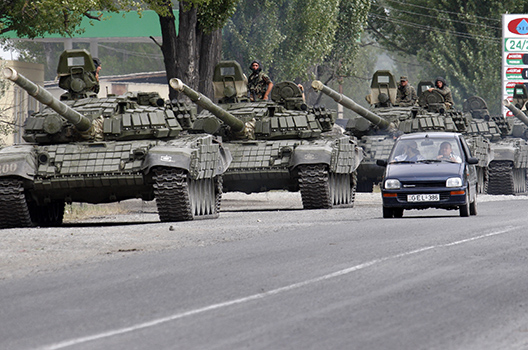 The 2008 Georgian War was Russia’s first successful military action outside of its borders since the collapse of the Soviet Union. The invasion came on the heels of Russian President Vladimir Putin’s now famous imperialist revival speech at the 2007 Munich Security Conference, where he launched into a long tirade against the West, enumerating Russia’s grievances and posturing to regain a global superpower status.

On the tenth anniversary of the Russian Federation’s war with Georgia we must remember that only Western unity and a battle-worthy NATO can prevent Russian aggression against its neighbors and deter a wider war.

While the Bush administration went out of its way to stop Moscow’s aggression and prevent Russian occupation of Tbilisi, the Obama administration went out of its way not to irritate Moscow. It refused to sell Georgia even light, defensive weapons, such as A-4 rifles and anti-tank missiles and emphasized “democratization” as the main tool of defense. The Kremlin took this as a green light to further expansion, which came six years later in Ukraine.

In the days following the 2008 French-brokered cease-fire in Georgia, Russian President Dmitry Medvedev gave a television interview where he outlined a blatantly irredentist foreign policy, which Russia intended to adopt for future interventions, including the protection of “Russian speakers” living world over against potential “foreign threats.” To paraphrase JFK, Putin weaponized the Russian language and went to war.

Based on Russian rhetoric and actions at the time, it was clear that Russia’s interventions in its “near-abroad,” including Ukraine, would only continue. Moscow was doubtless emboldened by its decisive, five-day victory over Georgia and the West’s limp response.

While the Russian Army won that war in 2008, certain gaps did limit the effectiveness of military operations, and future aggression could easily have been deterred with concerted political and military action from the West

Russian maintenance problems were widespread, and close to 60 percent of Russian tanks and armored vehicles broke down. There were also serious issues with counterbattery radars, a lack of access to satellite imagery, insufficient electronic warfare capability, and a shortage of unmanned aerial vehicles.

In my US Army War College monograph from 2011 co-written with Colonel Robert E. Hamilton, we noted that “Russian maneuver was unimaginative and caused higher casualties than necessary, but served to keep pressure on Georgian forces and had the advantage of simplicity.”

The Russian Air Force also performed poorly and exposed significant weaknesses in their capabilities including reconnaissance, targeting, and strategic attack. Furthermore, Russian aircraft were unable to operate at night and made little use of precision-guided missiles. According to Carolina Pallin and Fredrik Westurlund of the Swedish Defense Research Agency, the Russian air component showed a “remarkably limited capacity to wage air combat for a country aspiring to be a military great power.”

Since 2008, Russia continues to pursue its central strategic goals, which include the prevention of NATO membership for the former Soviet states. Russia consistently violates the territorial integrity of its neighbors, “annexing” Russian-speaking territories, such as Crimea, and recognizing pro-Moscow secessionist territories such as Abkhazia and South Ossetia, which are a part of Georgia.

From a historical perspective, Russia’s effort to divide European nations and its disregard for territorial integrity did not begin with the conflict in Ukraine. Rather, it began with the dismemberment of Moldova in the 1990s and the wars and occupation of Abkhazia and South Ossetia in Georgia. Ukraine is just the latest state to fall victim to the Kremlin’s aggressive irredentism, and we can only speculate who will be next.

In 2008, the Russians intended to remove the Saakashvili regime and take Tbilisi. They failed to do so, because the leaders of Poland, the Baltic states, and Ukraine gathered in Tbilisi, and because the Europeans and United States pushed Moscow to stop the aggression.

The Russians inflicted the trauma of war so heavily that Georgians would vote against Mikheil Saakashvili in 2013. The incumbent Bidzina Ivanishvili government is trying in vain to find an accommodation with to Moscow, while Georgia still nurses NATO membership aspirations after the failed 2008 Bucharest attempt by Bush.

Prime Minister Dmitry Medvedev recently warned that a “horrible disaster” will follow if Georgia joins NATO. Given past events, it would be naïve to ignore this threat as rhetoric alone.

Despite the Trump administration’s frustration with America’s European allies, this is not the time for the United States to forsake NATO. Russia is playing a tough and strategic geopolitical game, with the reacquisition or re-establishment of control over Russian imperial periphery as their raison d’etre.

Russia abandoned its goal of building a democratic nation-state twenty years ago (if it ever had it in the first place) and is instead seeking to reestablish hegemony in Eurasia. The larger Russia gets, the stronger and more self-assured its ruling security elite feel to target neighbors under the guise of protecting the ‘endangered’ Russian speakers, prevent NATO military presence, or a myriad of other flimsy pretexts.

In response, the United States should build up the defensive capabilities of Georgia and other post-Soviet states, while ensuring that NATO remains well-funded, battle ready, and capable of waging a 21st century war.

Let the tenth anniversary of the Russo-Georgian conflict serve as a somber warning both to us and to our European allies: Si vis pacem, para bellum — “if you want peace, prepare for war”.

Ariel Cohen, Ph.D. is a nonresident senior fellow at the Atlantic Council. You can follow him on Twitter @Dr_Ariel_Cohen.

This piece is part of a week-long series on the New Atlanticist marking the tenth anniversary of the 2008 Russian-Georgian War.