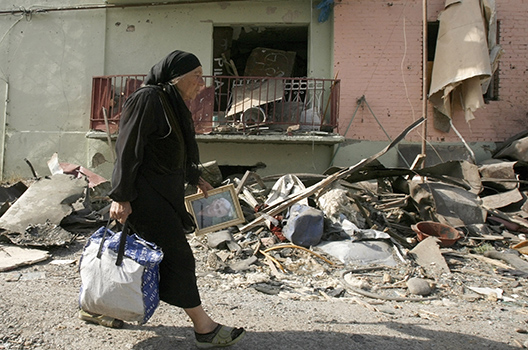 A Georgian woman carries her belongings from her damaged home in Gori some 80 km (50 miles) from Tbilisi, August 11, 2008. (REUTERS/David Mdzinarishvili)

On the tenth anniversary of Russia’s invasion of Georgia, it is essential not to forget the ongoing human, security, political, and economic impact both of that war, and of Georgia’s underlying unresolved conflicts with the breakaway regions of Abkhazia and South Ossetia.

Nothing brings home the cost of war better than meeting some of its victims. My most searing memory as British Ambassador to Georgia came when I visited a group of Georgian internally displaced persons near the city of Gori, less than fifty miles from Georgia’s capital, Tbilisi. They lived down a long dirt road, far from any schools, shops, medical centers, or places of work. They had little furniture, scant possessions, and few prospects for improving their lot. One elderly woman cried as she told me of her lost family: her husband prematurely dead due to ill health; one son killed in the war; another son killed in a criminal incident in Moscow, where he had moved in search of work. Another family was in despair, because both their children had serious medical issues which were not being treated. Their overall outlook remained bleak – a world removed from the more optimistic mood in Tbilisi, celebrating Georgia’s recently signed Association Agreement with the EU.

When I arrived in Georgia in 2013, the hot topic was the process of “borderization”: the gradual erection by Abhkazian and South Ossetian guards operating under Russian direction of physical barriers along the so-called Administrative Boundary Lines (ABLs) demarcating their territories from the rest of Georgia. This was disturbing enough on paper – seeking to establish new borders in violation of international law. It was only when I visited the boundary lines, however, that I truly understood what it meant in practice: families separated; farmers barred from traditional pastures or water sources; children disconnected from schools teaching in their own language; traders detached from markets selling their produce, unless they could bribe their way across.

Most disturbing were the frequent instances of Georgians detained for accidentally crossing the ABLs – for example, in pursuit of stray cattle – with their families then required to pay heavy fines to the de facto authorities in order to get them released. Sometimes such events end tragically, as in the case of 35-year-old Archil Tatunashivili, who died in unclear circumstances while in South Ossetian custody in February this year. But I also always spared a thought for the Abkhazians and South Ossetians living on the other side of the ABLs, who are largely cut off from the outside world, and denied much international aid, because their territories are not recognized as legally independent states.

Though the 2008 war technically ended with a ceasefire agreement brokered by then French President Sarkozy, it is a complete misnomer to call the current situation “frozen.” Despite Georgia’s pledge to not use unilateral force, Russia continues to violate the agreement by stationing its troops and conducting military exercises in South Ossetia and Abkhazia. Russia has also steadily tightened its political grip on these regions. In November 2014, it signed an agreement on “alliance and strategic partnership” with Abkhazia, to co-ordinate its foreign, defense, economic and social policy with Moscow, as well as mandate the creation of a joint Russian-Abkhazian military unit and internal affairs center. In March 2015 Russia signed an even stronger treaty with South Ossetia, effectively incorporating its military and economy into Russia’s, and making it easier for South Ossetians to obtain Russian citizenship.

The legacy of the war affects Georgians in other ways too. While Georgia has re-opened its markets and tourist destinations to Russians, Russia stills sanctions certain Georgian products, often on spurious health grounds, and restricts visas for Georgians hoping to live or work in Russia. Georgia’s economic development is held back by investor fears of renewed conflict. Georgia’s political development is undermined by Russian disinformation and propaganda, and support of anti-Western activist groups.

Russia also keeps Georgians unsettled by making frequent public threats to act against Georgia if, for example, it does not do more to clamp down on alleged terrorists on its territory or tries to move closer to NATO. In July this year, Russian President Vladimir Putin explicitly warned NATO against cultivating closer ties with Ukraine and Georgia, saying such a policy would have unspecified consequences for the Alliance. Russian Prime Minister Dmitry Medvedev was even more explicit this week, warning that plans for Georgia to join NATO could lead to full-blown conflict between Russia and the West.

Such remarks reveal the true purpose behind Russia’s actions – to prevent Georgia and other former Soviet countries like it, such as Ukraine and Moldova, from drawing closer to the West, and integrating into Western institutions such as the EU and NATO. Not only would this end the Kremlin’s hopes of restoring a Russian-led “sphere of influence” in its neighborhood but would also refute its thesis that western-style democracy is neither appropriate nor achievable for such countries – and by extension, for Russia itself, directly challenging Putin’s style of rule.

It is therefore no surprise that talks aimed at resolving the conflicts have made little progress – when one party, Russia, has no incentive for them to succeed. Indeed, Russia actively sustains the conflicts as a way to retain leverage over Georgia and advance its broader goals against NATO and the West.

Russian actions towards Georgia thus need to be understood for what they are: not just the bullying of a small neighbor, with painful consequences for the citizens of that country, but a direct challenge to the West itself. NATO’s current practice of not inviting states with ongoing territorial disputes into the alliance has given Russia a de facto veto over Georgia’s accession. Both for the sake of the people directly affected by the conflicts, and for the sake of its own credibility, the West should not let itself be played in this way. As we commemorate the tenth anniversary of the war, we must never let these so-called “frozen” conflicts become “forgotten” or lose sight of their geopolitical significance.

Alexandra Hall Hall, a nonresident senior fellow at the Atlantic Council, served as UK Ambassador to Georgia from 2013 to 2016. The views presented here are her own.