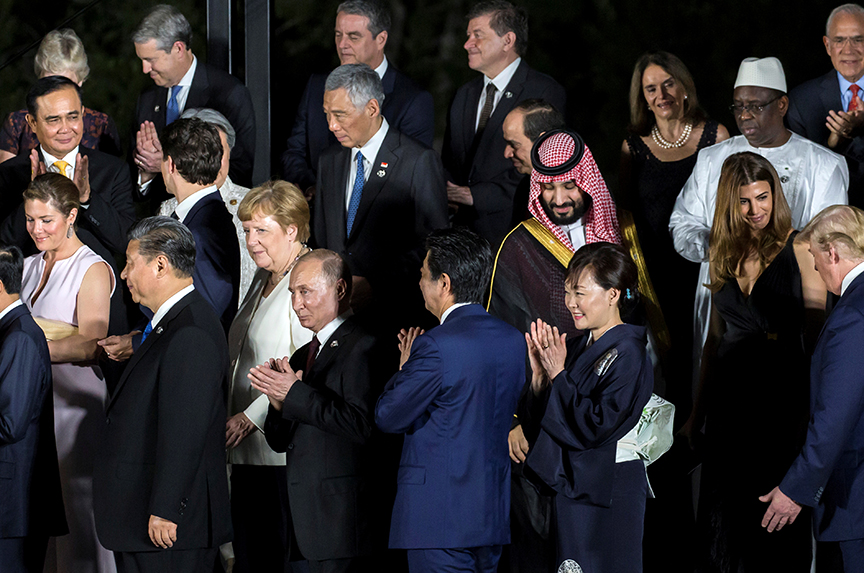 Japan's Prime Minister Shinzo Abe and other world leaders leave a family photo session with their partners in front of Osaka Castle at the G-20 summit, in Osaka, Japan June 28, 2019. (Tomohiro Ohsumi/Pool via REUTERS)

A sigh of relief reverberated from Osaka when US President Donald J. Trump and Chinese President Xi Jinping agreed to resume trade negotiations. Important as it is, this agreement overshadowed another development which will weaken the world’s ability to forge a consensus to tackle pressing common challenges: the Group of Twenty (G20) has effectively turned into the ‘Group of Nineteen Plus One.’

In one symbolic example, the Osaka Leaders’ Declaration’s Paragraph 35 reaffirms the commitment of all other members to a full implementation of the Paris Climate Agreement, while Paragraph 36 reiterates the US decision to withdraw from the same agreement “because it disadvantages American workers and taxpayers.” More importantly, Washington has found itself isolated from the other nineteen G20 members on important questions of WTO reform that are key to the United States’ efforts to change Chinese economic behavior.

As widely expected, the Trump-Xi meeting at the margins of the G20 Summit in Osaka on June 29 has resulted in renewed trade talks with additional US tariffs held in abeyance and accompanied by small reconciliatory moves. China had placed orders for 544,000 tons of US soybean ahead of the meeting, promising to purchase more. President Trump said he would relax US restrictions on dealing with Huawei “…allow[ing] sales to the company where there is not a national security problem”—however, the Huawei situation will be decided at the conclusion of the negotiations. Trump also welcomed more Chinese students to the United States.

Despite these relative successes, we are actually back to square minus-one, compared to the situation at the last G20 summit in Argentina. Since that meeting, the United States has imposed tariffs of 25 percent on $250 billion of Chinese goods and put Huawei, its affiliates, and five super-computer makers on the Commerce Department’s Entity List for export control.

For a future deal, the United States is pushing for an enforcement mechanism which would allow it to unilaterally assess China’s compliance with future agreements and allow Washington to relax existing tariffs or impose new ones, without the possibility of Chinese retaliation. China has also articulated its requirements for a deal: reasonable US demands of Chinese purchases of US goods, lifting of all tariffs and the ban on Huawei and other companies, respecting each other’s sovereignty, and meeting halfway on each side’s demands.

Those developments since December 2018 represent a hardening of attitudes on both sides, making it more difficult to reach a meaningful deal to really address the core problems of China’s subsidies to its state-owned enterprises (SOEs), which lead to an uneven economic playing field.

On other issues, there seems to be room for compromise, such as China’s commitment to purchase more US goods, protection of intellectual property, and forced transfer of technology. According to the United Nations Conference on Trade and Development (UNCTAD), China has become the single biggest exporter and importer of creative goods and services—those giving rise to intellectual property rights—which should make Beijing more willing to compromise on that area. Meanwhile Chinese technology is now so advanced that forced technology transfer should become less of a problem.

Both presidents could also become much more incentivized to make a deal if their economies or stock markets falter visibly. But while the importance of such politically expedient deals shouldn’t be dismissed, they won’t resolve the core problems mentioned above.

Reform of the World Trade Organization (WTO), particularly the rules governing state subsidies and the dispute settlement mechanism could help address these issues, but the United States needs the help of the international community, which was in short supply at Osaka. While many countries share the United States’ concerns about Chinese state subsidies and other practices leading to market distortions (such as the huge excess capacity in China’s steel industry), few other WTO members have the same sense of grievance against China exhibited by some senior US trade officials, who insist on reparations from China for previous “theft of intellectual property and forced transfer of technology.”

In short, whether a deal can be reached between the United States and China or not, the Osaka Summit shows that the international community struggles to cope with the challenges represented by China’s state capitalism and US unilateralism. In other words, if the former is the disease and the latter a medicine, then it looks like both disease and medicine are damaging the health of the international community.

Hung Tran is a nonresident senior fellow at the Atlantic Council and former executive managing director of the Institute of International Finance.