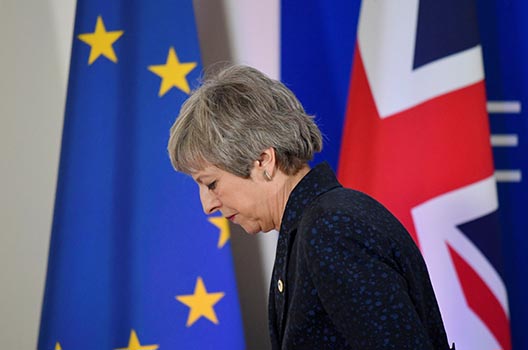 Unable to unite her Conservative Party around an acceptable deal to facilitate the United Kingdom’s exit from the European Union, British Prime Minister Theresa May announced on May 24 that she would be leaving her post.

While May maintained that she had done her best “to honor the result of the EU referendum,” she conceded “that it is in the best interests of the country for a new prime minister to lead that effort.” The resignation goes into effect on June 7.

May faced intense pressure to leave her post after she announced on May 21 that she would once again bring forward a new version of the draft Withdrawal Agreement she negotiated with the European Union (EU) that the British Parliament has already rejected three times.

May had already signaled her departure in March, when she said she would leave her post once the UK left the EU. This plan was further amended on May 16 when she stated in a press release that she would resign if her last attempt to get the Withdrawal Agreement passed by Parliament failed.

In an attempt to get enough support for her deal, May attempted to offer sweeteners to the opposition Labour Party, including agreements to have votes on remaining in the EU’s customs union or subjecting the UK’s future relationship with the EU to a “confirmatory referendum,” should the Withdrawal Agreement be passed by Parliament.

To ease the concerns about the “backstop” provision in the Withdrawal Agreement, which would require Northern Ireland to remain in regulatory alignment with the EU to avoid a hard border between Northern Ireland and the Republic of Ireland, May had earlier said that the government would “prohibit the proposal that a future government could split Northern Ireland off from the UK’s custom territory,” suggesting that the entire UK would abide by the backstop regulatory alignment. May also ensured that Belfast would have to give its consent to any changes to the backstop arrangements.

After detailing her updates to the new offer, May told MPs “I have compromised. Now I ask you to compromise, too.”

The new offer, however, was quickly rejected by her opponents as Labour Party leader Jeremey Corbyn said, “the rhetoric may have changed, but the deal has not.” But her plan also drew the ire of many members of Parliament from her own Conservative Party who thought the concessions to Labour and other pro-Remain parties on a potential second referendum or customs union threatened the success of Brexit. “I will not support the [prime minister’s] new deal that enables a second EU referendum,” Conservative MP Ross Thomson tweeted shortly after May’s speech. May’s own departure was preceded on May 22 by the resignation of House of Commons Leader Andrea Leadsom, who said she could not “fulfill my duty as Leader of the House, to announce a Bill with new elements that I fundamentally oppose.”

Having taken office less than one month after the UK voted to leave the EU, May will now leave almost three years later with that very exit still up in the air. “I knew that delivering Brexit was not going to be simple or straightforward,” May said on May 21. In the end, the inability to find a road ahead caused her “to give up the job I love earlier than I would like.”

Atlantic Council experts react to the resignation of British Prime Minister Theresa May:

Peter Westmacott, a distinguished ambassadorial fellow at the Atlantic Council and a former UK ambassador to the United States:

“Belatedly, Theresa May realized that there just wasn’t any point in trying for a fourth time to get her unloved Brexit package through the House of Commons. Even her most loyal ministers were queuing up on May 23 to tell her the game was over, and her credibility irreparably damaged.

“Historians will probably conclude that her mission to deliver Brexit was doomed from the moment she lost her parliamentary majority after unnecessarily calling an early general election in June 2017. Others will add that the ‘red lines’ she drew were so uncompromising and unrealistic that she would never be able to reach an agreement with Brussels she could sell to her own party.

“She steps down as Conservative leader on June 7, after helping the Queen give Donald Trump and his family the state visit she promised them right after his inauguration. But she will remain at 10 Downing Street, in office if not in power, until the Conservative Party—not the country—has chosen her successor.

“The polling suggests Brexiteer Boris Johnson is the favorite to succeed May, though history suggests the front runner rarely wins these contests.

“Whoever becomes prime minister, the same problems that have beset Theresa May’s premiership will remain. The Conservatives remain divided, the country too. There is no Brexit deal that Parliament can agree on, and no prospect of a meaningful renegotiation with Brussels.

“The default position remains that, unless a deal is agreed, the UK will leave with no deal on October 31. Neither Parliament nor the people want that.

“How to square this circle, or persuade Parliament and the British people that Brexit just isn’t worth having, will be the extraordinarily difficult challenge facing the next British prime minister. Amazingly, there is no shortage of Conservative politicians who seems to want the job.”

“With May’s departure, Britain moves much closer to leaving the EU in a [Brexit] “no deal” scenario. Candidates for Conservative leader—[former foreign secretary] Boris Johnson and others—will run on a platform of being able to negotiate a better deal with Brussels, but being willing to do a “no deal” exit if the EU does not cooperate. The EU has already announced that the resignation of Theresa May does not affect its position that the Withdrawal Agreement has been agreed and will not be reopened. Anti-EU rhetoric during the Conservative Party leadership race is only likely to harden this stance. The October 31 deadline is now key.”

“I don’t think [May’s resignation] changes the underlying political calculus. It is going to be just as hard for the next prime minister to get a majority for anything in the British Parliament until there are [general] elections. I think it is challenging enough that I wouldn’t be surprised if the next prime minister gets eaten by the moment and doesn’t last very long either.”