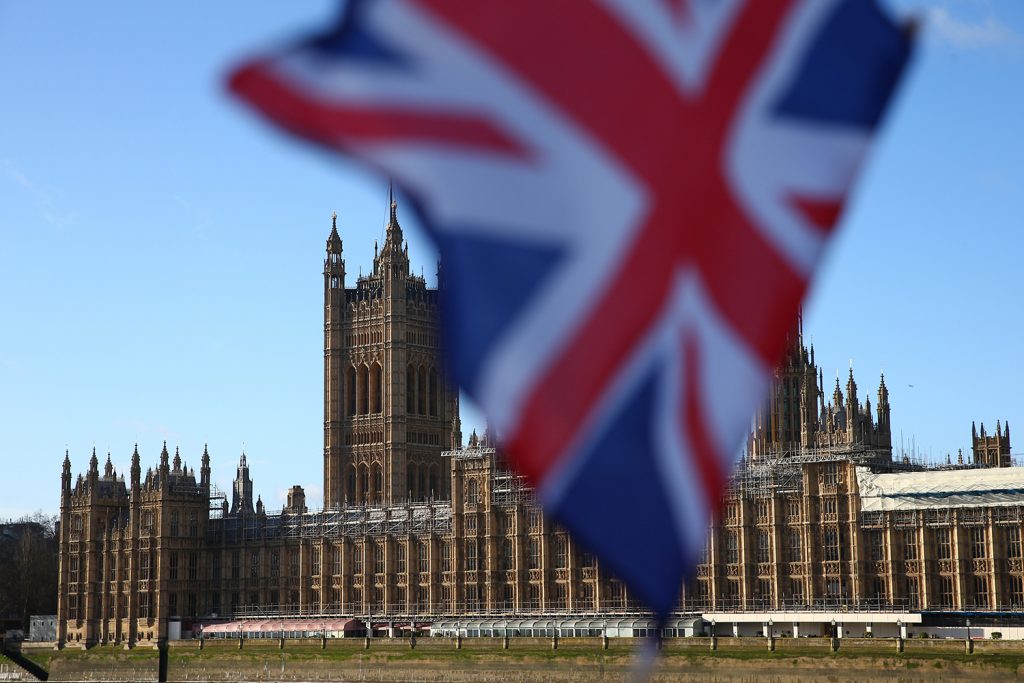 A Union Jack flying on Westminster Bridge opposite the Houses of Parliament in London. (REUTERS)

Following British Prime Minister Boris Johnson’s clear victory on December 12, sights are now set on how Johnson will achieve Brexit and how his government will attempt to heal the deep fractures within British politics. Here are six takeaways from the general election:

Johnson and the Conservatives

Boris Johnson leads a party that he has largely molded in his own image, having thrown out the last hard core of ‘Remainers’—MPs who backed the Remain side in the 2016 Brexit referendum—and bringing in a new cohort of MPs from once-industrial constituencies that voted to leave the EU.

The prime minister now has almost unfettered power, with little or no restraints from either the formal opposition parties or from within his own party. The new MPs assembling at Westminster today, many of them representing former industrial areas captured from Labour, present both a challenge and opportunity. Can he secure their allegiance not only for one election, but long-term?

A first signal is likely to come when the Government presents its budget. It seems probable that this will include substantial spending and investment incentives to help the Midlands and the North of England, the site of the vast majority of conservative victories as it broke down Labour’s traditional “Red Wall.” An equally interesting prospect is that Johnson’s vision of a One Nation Conservatism means there may also be substantial shift in traditional Tory spending patterns, with a focus more on public transport and helping those who rent their homes than on private car ownership and home-owners.

Johnson’s way to complete the UK’s formal exit from the European Union on January 31, 2020 is now clear. But this only represents the first stage of a process that also includes the negotiation of a replacement trade agreement. The prime minister has promised this will be concluded by the end of 2020. There is a widespread view that the complexity of such agreements, which usually take several years to conclude, makes this unrealistic, but Johnson has surprised his critics before with his ability to strike swift deals with the European Commission. Moreover, his eighty-seat parliamentary majority means that he has the power either to make major concessions, such as over continuing alignment with EU rules and regulations, to secure a swift agreement or to secure an extension to the timeframe for negotiations beyond December 2020.

While these negotiations have tremendous potential for determining the terms of trade and, indeed, the standard of living for the UK’s 67 million people, they will have little immediate political impact, at least on the UK mainland. The election did deliver a collective “majority” of votes for parties campaigning for a second referendum on Brexit, but this can be dismissed in much the same way as Hillary Clinton’s “victory” in the popular vote in the 2016 US presidential election. The Remain “majority” has little impact on practical politics right now (apart from feeding recriminations within and between the opposition parties) and will only prove of relevance next time around if Brexit itself turns out to be a disaster.

We don’t know what the next incarnation of the Labour Party will look like. But an initial post-election analysis by the Labour affiliated Fabian Society shows that if Labour is ever to win an overall majority again—and the last time that happened was in 2005 when Tony Blair was prime minister—then it will have to win over no less than 123 seats, and that 63 percent of these are in the North, the Midlands, and Wales—almost all of them in areas that voted to leave in the 2016 referendum.

“There is no electoral future in fighting a rear-guard action on Brexit,” the report’s author, Fabian General Secretary Andrew Harrap wrote. “Senior Labour politicians need to emotionally and psychologically accept the reality of leaving the EU.” He added: “Labour must again debate how it works with other progressive parties because its best hope of returning to power is to govern in partnership. The new leadership should consider saying this in public and committing to build relationships with other parties. More controversially, if Labour really wants to return to power quickly, it may need to consider formal alliances.”

As Labour MPs line up to consider whether to contest an impending leadership election—now that party leader Jeremy Corbyn has announced he will be stepping down once a new leader is in place—one of the few glimmers for hope is that while the election saw an undoubted large net swing from Labour to Conservative, this was mostly indirect. It stemmed mainly from a collapse in the Labour vote in favour of the Brexit Party, and only a little from direct switches to the Tories, whose vote rose by just 1.2% while Labour’s fell by 7.8%.

Since the Brexit issue will be out of the way when the next general election comes along in four or five years’ time—unless, of course, it proves a disaster which is an entirely different case—there will be no Brexit Party around and whoever leads the Labour Party by then will have had several years to try to reconnect with traditional voters who didn’t want to vote Tory but couldn’t stand Corbyn’s leadership and/or the party’s ambivalent stance on Brexit.

The only significant political challenge to Johnson’s Conservatives is likely to come from the Scottish National Party (SNP), the other big winners from the election, who took forty-eight of Scotland’s fifty-nine seats at Westminster, making thirteen gains from their unionist opponents. Nicola Sturgeon, Scotland’s first minister, stressed that she saw the SNP victory as a mandate for holding a fresh referendum on Scottish independence. Speaking on December 15, she said: “If the United Kingdom is to continue then it can only be by consent, and if Boris Johnson is confident in the case for the union, then he should be confident enough to make that case and allow people to decide…Scotland cannot be imprisoned within the UK against its will.” However, Michael Gove, a cabinet minister who is one of Johnson’s most senior lieutenants, responded by saying that a second independence referendum was not on the cards anytime soon. Gove, also speaking on December 15, said: “We have just seen what happens when politicians try to overturn a referendum result. In the same way, we should respect the referendum result of 2014…We are not going to have an independence referendum in Scotland.”

The problem is that under current legislation, holding a fresh referendum requires the agreement of both the Scottish and UK governments, although Sturgeon will argue it should really be only up to Scotland’s representatives to determine whether to hold one. This feud between Edinburgh and London is likely to intensify if Sturgeon both campaigns and wins the next Scottish Assembly elections in May 2021, as she did in the 2019 UK election, on an outright commitment to hold a referendum. So Johnson has less than eighteen months to convince Scotland of the benefits of staying in the union to prevent an SNP victory in 2021.

Northern Ireland may be less likely than expected to pose immediate problems for the new government since it will now be preoccupied with getting Stormont, its own devolved elected assembly, back to work after a three-year lapse. The staunch pro-UK Democratic Unionist Party (DUP) and the equally staunch Irish nationalist Sinn Fein, the twin pillars of the province’s power sharing structure in abeyance since the collapse of their last administration in 2016, both lost ground to more moderate challenges from the non-aligned centrists of the Alliance Party and the moderate Irish unity party, the Social Democratic and Labour Party.

The election made it clear how bitterly opposed traditional pro-UK unionists were to the fact that the Brexit agreement struck by the prime minister provides for customs checks on goods flowing from the mainland of Great Britain to Northern Ireland, which will continue to have a common customs area with the EU in order to avoid having a hard border between the North and the Irish Republic, a EU member state.

However, now that Johnson has his clear majority, he is effectively free either to impose such checks or, if he worries that this might cause unrest amongst Northern Ireland’s pro-British protestant unionist community, to find some other way to resolve the vexed question of how to create a border or customs line between the UK and the EU without creating an effective border on the island of Ireland. He can be expected to come under heavy pressure from the European Union and the Irish government to do everything possible to ensure the maintenance of the Good Friday Agreement that ended the Troubles, and the preservation of an almost invisible border between Northern Ireland and the Irish Republic that is such a potent symbol of that agreement.

Third parties and rebels exercised considerable influence in the election—but not to their own benefit. In England and Wales such intervention largely divided the anti-Conservative vote, thus contributing to Johnson’s victory. Indeed, none of the Conservative MPs sacked by Johnson or the Labour MPs who quit their party in opposition to Corbyn, were re-elected. The UK’s traditional third party, the Liberal Democrats, actually saw their seat tally slide from twelve to eleven, by comparison with the last general election in 2017, although their share of the vote increased from 7.4% to 11.6%.  Their leader, Jo Swinson, lost her seat to the SNP thus ensuring the party will now have to choose its fifth leader in five years.

Although the SNP remains a formidable third force in the UK parliament, a consequence of its dominance in Scotland, the prime result of this election is, curiously, a return to two party politics. But it’s a return that is characterized by a triumphant, united, and very changed ruling Conservative party and a defeated, anguished, and bitterly divided Labour party which has yet to chart its own path forwards. 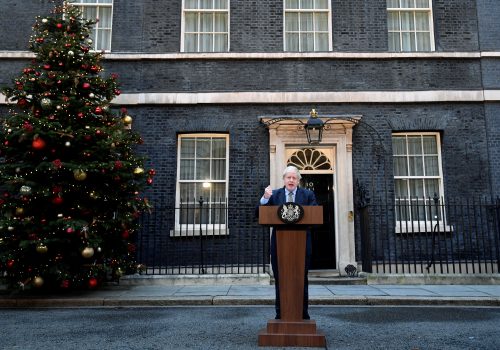 Prime Minister Johnson – who famously craves both public attention and a place in history – won the former and a shot at the latter through a British election victory this week that was the most convincing conservative victory since Margaret Thatcher in 1987. To save the United Kingdom itself, however, he must reverse course, or at least amend direction, on much of what he has said and done to win in the first place. 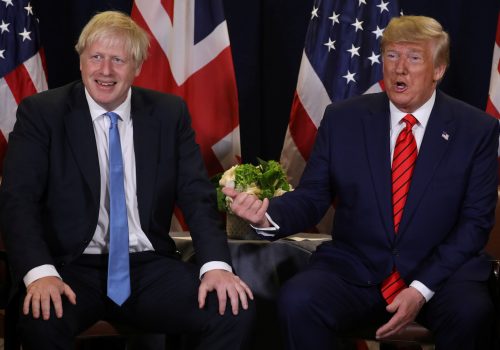 As the UK focuses on completing Brexit and developing new trading links with the rest of the world, Washington and London will likely continue to look for ways to stay aligned. 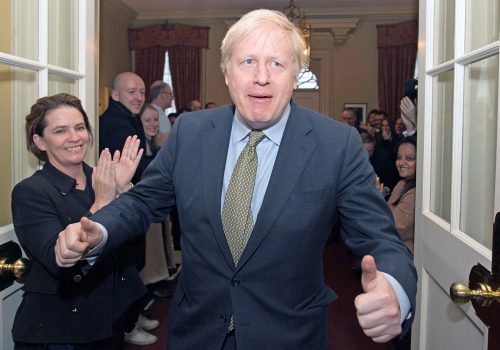 “Much of the electorate seems to have bought the Johnson message that electing a Conservative government will mark the end of the Brexit process,” Sir Peter Westmacott said. “In fact, it only signals the beginning of the real negotiations on Britain’s future relationship with the EU and the rest of the world.”