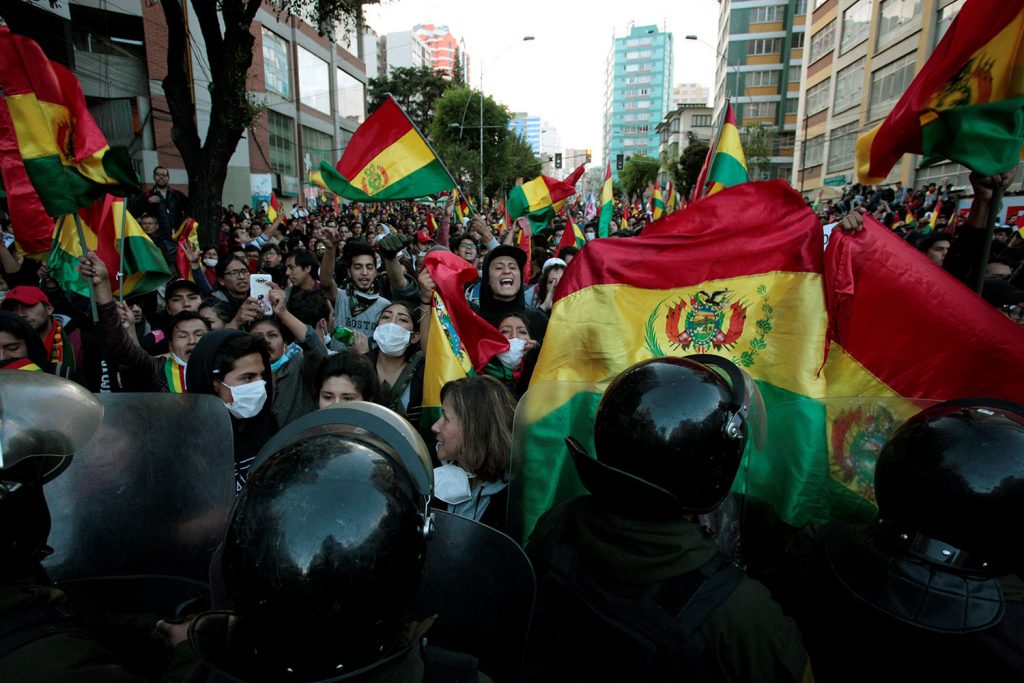 Imagine if a US presidential candidate could win the presidency with only 40 percent of the popular vote, as long as his or her margin of victory was at least 10 percent. Imagine if, instead of two significant political parties, the United States had nine, each with its own candidate. An incumbent president would have an enormous advantage in the race because the opposition vote would be split across all of the other candidates, and the incumbent would be able win reelection even if a majority of the American people voted for someone else.

Bolivian voters do not have to imagine this scenario, as this is the electoral reality they face under the Bolivian Constitution. Since becoming the president of Bolivia in 2006, President Evo Morales of the Movement for Socialism (MAS) party has been reelected twice by overwhelming majorities of more than 60 percent in 2009 and 2014. However, his reelection for a fourth term in office on October 20 was less certain. Polls predicted that former Bolivian President Carlos Mesa of the Revolutionary Left Front (FRI) was likely to garner enough votes to require a second-round runoff election in December.

On October 20, however, Bolivia’s Supreme Electoral Council (CNE) suddenly stopped releasing quick election returns after the last update showed vote counts of 45.3 percent for Morales and 38.2 percent for Mesa—a 7.1 percent margin that would trigger a runoff election. When the CNE resumed releasing the results on October 21, the vote count had been updated to give Morales a 10.12 percent margin over Mesa. If this result stands on October 27, when the final results are confirmed, Morales will have narrowly avoided a runoff and will have won the presidency for a fourth term.

Mesa and his campaign are refusing to accept the election results as they currently stand. On October 21, protests broke out across multiple Bolivian cities, where opposition to Morales is strongest. Accusing Morales’ government of rigging 1-3 percent of the votes via selective fraud to avoid a runoff with Mesa, protestors set fire to electoral offices and clashed with police. The situation escalated further on October 22 when Antonio Costas, the vice president of the Bolivia’s electoral board, resigned in protest of the interruption in the vote count. The election results have also garnered widespread international criticism from the European Union, Organization of American States, US Department of State, and the foreign ministries of Argentina, Brazil, and Colombia, which all have called for full electoral transparency and accountability in the vote counting process.

Why is the opposition to Morales growing now?

Per Article 168 Bolivia’s 2009 constitution, presidents and vice-presidents are limited to two terms in office. In 2016, Morales backed a constitutional referendum to end presidential and vice-presidential term limits. The referendum was defeated by popular vote. But, in 2017, the Supreme Tribunal of Justice of Bolivia (composed of many Morales loyalists) ruled that, contrary to constitutional rules, all term limits for Bolivian elected officials were null and void. The Morales’ regime’s justice system overturned the will of the people by guaranteeing him the ability to run for office indefinitely. This has galvanized opposition to his regime, as many of his critics believe the court ruling subverts democratic norms by removing a critical check on executive power. Recent corruption scandals and troubling signs of an impending economic crisis have also negatively impacted Morales’ approval rating.

Why does Morales still have support?

Morales still enjoys a base of political support of about 30 to 35 percent concentrated among rural voters, indigenous communities, and the commodities sector. Under his presidency, Bolivia has enjoyed economic stability and steady growth averaging 4.96 percent annually. High prices for Bolivia’s gas and mineral exports combined with wealth redistribution policies have lifted hundreds of thousands of Bolivians into the middle class; gross domestic product per capita doubled while inequality, as measured by the GINI index, decreased. Key commodities industries, such as with the coca growers of Chapare, have benefited under the Morales regime. Morales also enjoys international support from Russia, Cuba, and Iran, which operate pro-Morales television and radio programs throughout rural Bolivia. Conversely, opposition parties are geographically fragmented and often struggle to sustain political messaging outside of cities.

Bolivia’s political future hangs in the balance. It is unclear whether the final election results on October 27 will yield the 10 percent margin Morales needs to avoid a runoff election. As of October 24, Morales has claimed outright victory in the election; if he refuses to respect the constitutional rules or release accurate vote counts, the opposition protests and international concern are likely to escalate. Beyond the scope of the presidency, preliminary results indicate that Morales’ MAS party will lose  its current two thirds super-majority in the legislature, which could cause political instability. With tensions running high on the streets of Bolivia and the inside the Palacio Quemado, the next few days will be critical for the democratic institutions of Bolivia. The international community should observe the vote tabulation and evolving political climate closely as events unfold.

Sarah Hennessey is an intern at the Atlantic Council’s Adrienne Arsht Latin America Center and a graduate student in the Latin American and Hemispheric Studies program within the Elliott School of International Affairs at the George Washington University in Washington, D.C.

Twenty years after the United States enacted Plan Colombia, Ivan Duque said the United States and Colombia are ready for the next chapter of their partnership, focusing on solidifying the rule of law , promoting entrepreneurship and trade, and managing growing regional challenges.

As Bukele continues to settle into office, what policies from his proposed Plan Cuscatlán should his administration prioritize?

Guatemala’s anti-corruption commission is ending, but the fight will go on

While current anti-corruption developments are largely separated by national borders, as Latin American societies advance their calls for institutional change the formation of a united, transnational corruption crusade is an exciting prospect for the region.