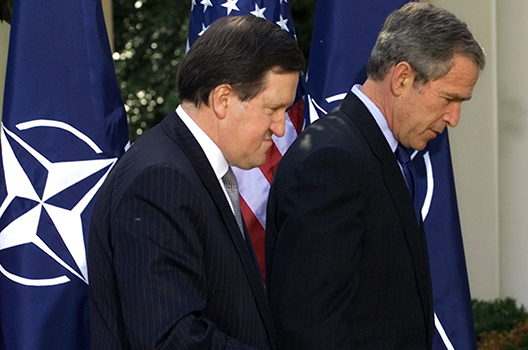 U.S. President George W. Bush and NATO Secretary General George Robertson leave the Rose Garden together after addressing members of the press following their Oval Office meeting, October 10, 2001. Robertson said that NATO will provide the United States with military assistance in their battle against the forces of the Taliban and Osama bin Laden. (REUTERS/Win McNamee WM/HB)

In the early hours of September 12, 2001, as the world was coming to grips with the enormity of the events of the day before, US National Security Advisor Condoleezza Rice was busy working the phones. She discussed with the United States’ NATO allies the possibility of doing something never done before in the history of the Alliance: the invocation of Article 5 on collective defense.

Daniel Fried was working at the National Security Council and in Rice’s office at the time. He recalls Rice’s conversation with her French counterpart. “We need this,” she said.

By the evening of September 12, less than twenty-four hours after al Qaeda terrorists hijacked and crashed commercial airliners into the twin towers of the World Trade Center in New York, the Pentagon, and a field in Pennsylvania, the allies invoked Article 5 in an act of solidarity with the United States. Then NATO Secretary General George Robertson informed United Nations Secretary-General Kofi Annan of the Alliance’s decision.

NATO joined the United States in the war in Afghanistan after the Taliban government in Kabul refused to hand over al Qaeda leader Osama bin Laden. Besides the historic invocation of Article 5, NATO’s participation in the war marked the first time that the Alliance had launched operations outside the Euro-Atlantic area.

“American skepticism about NATO is almost as old as the Alliance,” said Fried. “But when America was attacked on 9/11, NATO allies voted unanimously the next day to invoke NATO’s Article 5, the commitment of NATO members to come to the defense of any member under attack.”

“That was the first and so-far only Article 5 decision in NATO’s history: invoked for America’s sake,” said Fried. Having wrapping up a forty-year career in the Foreign Service, Fried now serves as a distinguished fellow in the Atlantic Council’s Future Europe Initiative and Eurasia Center.

R. Nicholas Burns, an Atlantic Council board director, was serving as the US ambassador to NATO in 2001. “I felt the power of our alliance and will be forever grateful,” Burns tweeted recalling the invocation of Article 5.

Those NATO allies, Burns reminded, “are still with us in Afghanistan today.”

US President Donald J. Trump took a tough stand on NATO even before he was elected president in November 2016. On the campaign trail, Trump described NATO as “obsolete.” Since taking office, he has excoriated allies for not spending enough on defense.

On his first visit to NATO headquarters as president in May 2017, Trump alarmed allies by pointedly excluding any commitment to Article 5 in his remarks. He subsequently affirmed his commitment to Article 5 in a meeting with Romanian President Klaus Iohannis in Washington on June 9, 2017. “Certainly we are there to protect,” Trump said at a White House press conference.

Days earlier, on June 5, it was US Vice President Mike Pence who first publicly affirmed the Trump administration’s support for NATO and its commitment to the collective defense of the Alliance. “Our commitment [to NATO] is unwavering,” Pence said in remarks at the Atlantic Council’s Distinguished Leadership Awards reception in Washington.

In July, British Prime Minister Theresa May agreed to almost double the presence of British troops in Afghanistan at Trump’s request. British troops ended their combat mission in Afghanistan in 2014. The 440 additional troops will participate in a NATO-led mission to train and assist Afghan forces.

Since 2001, US NATO allies have lost more than 1,000 troops in Afghanistan. “They died in solidarity with us, for the Alliance and the values it defends,” said Fried.

In congressional testimony on September 5, Burns said that he saw the “true value of allies first-hand on 9/11.”

“After the US was attacked in New York and at the Pentagon, the Canadian and European ambassadors to NATO let me know within hours that their governments were willing to come to our defense,” he recalled. “The allies stood up to defend us.  They decided that Osama bin Laden’s attack on the US was an attack on them as well. All of them deployed forces to Afghanistan with us.  They remain with us there today seventeen years later.  This is the true meaning of NATO for America.”