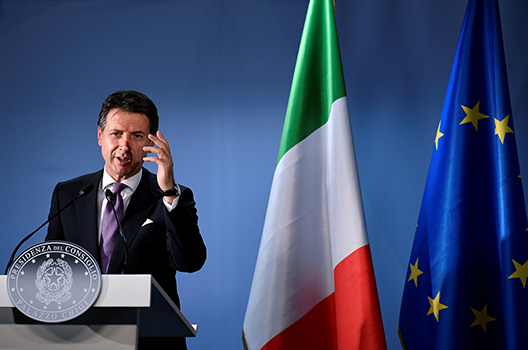 A budget proposal put forward by Italy’s populist government would create a prohibitively high deficit and has sharpened the conflict between Rome and the European Union.

Despite warnings from Brussels, the ruling Italian coalition of La Lega and the 5 Star Movement submitted its 2019 budget proposal to the European Union (EU) on October 15. A combination of tax cuts, increased social spending, and a roll back of pension reforms will cause the deficit to jump from 0.8 percent to 2.4 percent of the gross domestic product (GDP), according to the government’s calculations. The proposal, which creates a deficit that is more than triple the level desired by the EU, has left investors jittery about the trajectory of the Italian economy.

Brussels has until October 23 to respond, but there is already ample evidence of how it will do so.

In a recent letter, the European Commission warned that the Italian budget proposal constitutes a “significant deviation” from Italy’s effort to reduce its large debt, which currently stands above 130 percent of the GDP.

The EU will likely contend that Rome is too optimistic with its economic growth forecast. This means that the projected deficit will likely surpass the 3 percent limit that all EU member states must adhere to under current treaties.

In the jargon used by European authorities, this may pave the way to starting an “excessive deficit procedure” by the end of the year. Eventually, it could lead to financial sanctions being imposed if Italy persists with its current plans.

The threat or even implementation of sanctions is unlikely to convince the Italian government to change course. Sanctions can only be imposed after a tortuous, lengthy process and fundamentally have little coercive power to alter behavior. Moreover, the Italian government seems willing to engage in a standoff with Brussels as it believes that it—particularly La Lega—could benefit electorally from such a scenario.

Simultaneous pressure from the private market might prove a different story. Investors, less patient than EU officials, have already demanded higher yields on Italian sovereign, corporate, and bank debt. The spread between the Italian and German ten-year bonds, a widely considered measure of risk, has risen above 300 basis points, last seen in 2012 during the European debt crisis. While still below the highs of that crisis, the concern today is evident.

In a self-defeating loop, rising borrowing costs further worsen Italy’s ability to reduce its debt. Anxiety over Italy’s budget will feature in the considerations of rating agencies—Moody’s and Standard & Poor’s, which are scheduled to update their ratings of Italian sovereign debt by the end of October.

Policy makers in Rome ought to be concerned. Italian debt is currently rated two notches above junk status by three of the four ratings agencies recognized by the European Central Bank (ECB). A downgrade below investment-grade rating would not only mean a loss of confidence, but more importantly it would complicate the ECB’s ability to continue supporting Italian banks and the Treasury. Under that scenario, Italian bonds may become ineligible for regular lending under the ECB’s current Quantitative Easing (QE) stimulus program. Incidentally, QE is poised to be gradually phased out in the coming months.

At the heart of the building tensions lie Italy’s economic vulnerabilities. Despite its considerable primary fiscal surplus (that is, before accounting for debt interests) Italy’s fiscal framework continues to pose one of the major risks to financial market stability and the global economy. Given the size of Italy’s debt pile, mechanisms and institutions founded during the European debt crisis, such as the European Stability Mechanism (ESM), are insufficient to sustainably bail out Italy should such the need arise.

The back and forth between Rome and Brussels on the budget risks sustained higher yields and funding problems in the debt markets for Italy. Unchecked, instability could spread to other high-debt EU member states, similar to what happened during the financial crisis. For now, this effect has been muted. Spanish and Portuguese ten-year bond yields have mostly not responded to developments in Italy.

There will be many opportunities along the way to avoid a worst-case scenario. When the EU rejects—as it is expected to—the proposed Italian budget, the Italian government and parliament will have three weeks to make amendments.

While external pressure might be enough to force some sort of agreement, internal pressure should also be kept up. Fissures within the government or backlash from other Italian institutions are a possibility. For instance, Italian President Sergio Mattarella, who must approve the final budget, could deem the budget unconstitutional, since it deviates from the Italian Constitution’s mandate for a balanced budget.

Italian and European leaders need to tread carefully in coming weeks. Markets are already on high alert, and mistakes could prove costly.

Álvaro Morales Salto-Weis is a program assistant with the Global Business & Economics at the Atlantic Council. You can follow him on Twitter @alvarosaltoweis.