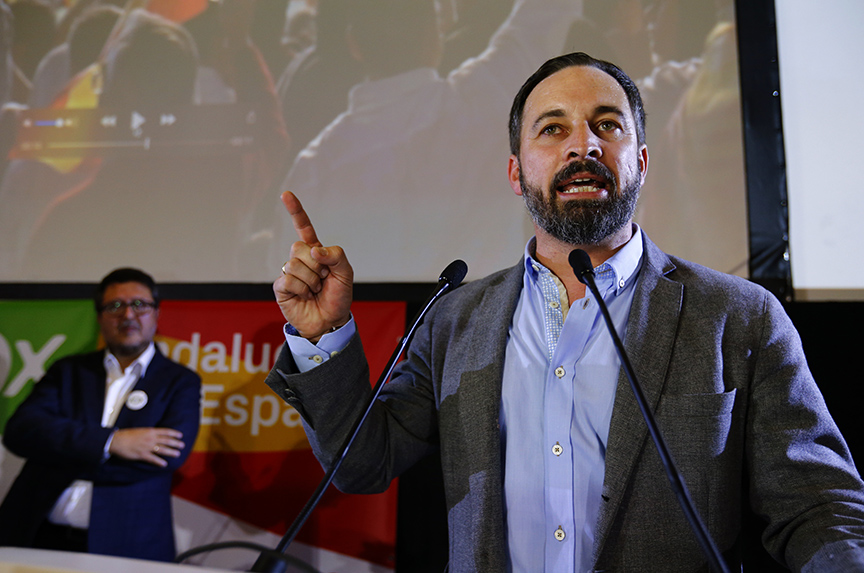 Spain’s far-right Vox party leader, Santiago Abascal, delivered a speech in which he celebrated the outcome of the Andalusian regional elections in Seville, Spain, on December 2. Regional candidate Francisco Serrano is seen in the background. (Reuters/Marcelo Del Pozo)

For much of the past decade, Spain has been an exception to the Europe-wide electoral rise of populist right-wing parties. The December 2 regional election in Andalusia ended the Spanish anomaly. As the results poured in, heads turned in Europe as Vox, a populist right-wing party, won 11 percent of the vote and twelve seats in the Andalusian parliament. Most polls in the lead-up to the vote had the party around the 5 percent mark.

Populism is nothing new in Spanish politics. In recent years, left-wing Podemos has successfully employed a brand of populism that appealed to large portions of the electorate in the wake of the 2008 financial crisis. The conservative platform, on the other hand, was dominated in the 2008 and 2011 elections by the center-right People’s Party (PP).

There are several theories why the populist right has been unable to gain a foothold in Spain until now.

Immigration has not been particularly salient issue in Spain in the post-Franco era, even as large waves of migrants settled in the country during the late 1990s and early 2000s. Spain did not shoulder as great of a burden during the refugee crisis as other Western European countries—Italy, Germany, and Sweden—did, while the post-communism migration patterns of the early 1990s left Spain largely untouched. In Italy, Germany, and Sweden, the populist right wing has experienced sharp gains since the migrant crisis in 2015, as immigration dominated domestic headlines.

This is beginning to change in Spain, particularly in Andalusia. Around 50,000 migrants have moved to Spain so far in 2018. Many of them have crossed the Mediterranean Sea into Spain’s southernmost region.

The results of the election indicate that Vox’s anti-immigration and anti-Islam stance resonated with a segment of the electorate. On Twitter, the party calls for a “reconquest” evoking strong historical imagery of the Spanish Reconquista.

Another theory is that, similar to Germany, Spain’s history with the far-right Franco dictatorship, acted as an effective bulwark against modern day iterations of right-wing populism. Vox has invoked comparisons to Franco’s Spain, perhaps most notably in its approach to the Catalonia question, where Vox has gone above and beyond Spain’s mainstream parties in condemning Catalonia’s independence efforts. The party rejects Spain’s decentralized political system and above all, Catalonian autonomy. It has gone as far as proposing  the suspension of the European freedom of movement Schengen Agreement while Catalan independence leaders are still at-large and hide in other European countries. It has also harshly criticized the way the Spanish government and center-right PP have handled the Catalonia question. Not unrelated to the Catalonia question is the controversy surrounding Spain’s exhumation of the remains of Francisco Franco earlier this year, which Vox politicized.

Vox shares many ideological and rhetorical similarities with other populist right-wing parties in Europe. It is staunchly nationalist, anti-immigrant, an advocate of traditional gender roles and conservative values, quick to blame the problems in Andalusia and Spain on corrupt leftist politicians, and claims to be the voice of the people.

Nevertheless, Vox in Andalusia remains somewhat unique.  The mainstream center-right PP has not distanced itself from Vox (and the center-right Citizens Party, or Cs, only did so publicly after the election result). Instead the PP has hinted at the idea of a possible coalition. This represents a stark contrast from the way the political mainstream received the Sweden Democrats in Sweden and the Alternative für Deutschland (AfD) in Germany following their electoral successes. The two were ostracized and isolated, and to this day are not considered viable coalition partners in their respective countries.

Andalusia, Spain’s most populous region, has traditionally been a socialist stronghold. The Spanish Socialist Workers’ Party (PSOE) suffered major losses on December 2, however, losing fourteen seats. Podemos and the PP also performed poorly, losing three and seven seats, respectively. These results will make coalition building difficult for both the right and the left and could possibly leave Vox as the kingmaker, which could explain the overtures made to it by the mainstream center-right.

Spanish Prime Minister Pedro Sanchez had reportedly considered holding snap elections early in 2019.  Given the losses incurred by his party, PSOE, in Andalusia and the emergence of a viable populist right-wing actor, however, he may reevaluate his strategy.

Vox will look to carry its momentum into next year’s European parliamentary elections. If elected to the European Parliament, Vox would likely be faced with a choice of three political groups within the European Parliament: either Europe of Freedom and Direct Democracy (EFDD), Europe of Nations and Freedom (ENF), or European Conservatives and Reformists (ECR). Currently, Europe’s populist right-wing parties are split between the three groupings, though the AfD’s Jörg Meuthen has expressed interest in consolidating the party family. Brexit could be the catalyst for a reworking or consolidation of the groups, as British members of the European Parliament (MEPs), who will depart in June 2019, form a sizeable part of both the EFDD (the United Kingdom Independence Party) and ECR (the United Kingdom Conservative Party), with UKIP politician Nigel Farage serving as the chairman of the EFDD.

As it stands, EFDD is home to the AfD and Italy’s Five Star Movement, while the ECR is made up in part of the Sweden Democrats, the Danish People’s Party, and Poland’s Law and Justice party. France’s National Rally (formerly National Front), Austria’s Freedom Party, and Geert Wilder’s Freedom Party in the Netherlands are notable members of ENF.

The European Parliament elections could come at an opportune time for the populist right-wing parties across Europe. Social Democratic parties are faltering across the Continent, French President Emmanuel Macron and German Chancellor Angela Merkel—the de facto leaders of the Continent—are facing domestic challenges that could remain unsolved well into 2019, and the center-right European People’s Party (EPP) is dealing with public backlash following the closing of the Central European University in Budapest by EPP ally Viktor Orbán in Hungary. Polling numbers indicate that a populist right-wing political group could become the third strongest force in the European Parliament.

Vox is part of the growing electoral viability of populist right-wing parties throughout Europe. So long as immigration issues remain salient and the Catalonia question lingers, Vox will become an increasingly influential player in Spain, with the potential to play a role in internal populist right-wing European Parliament politics. The reaction to Vox’s arrival—among both the mainstream parties of Spain and the greater populist movement in Europe—will determine whether this political newcomer is a temporary blip or a new political force.

Alex Baker is an intern at the Atlantic Council’s Future Europe Initiative. Follow him on Twitter @alexpieterbaker.