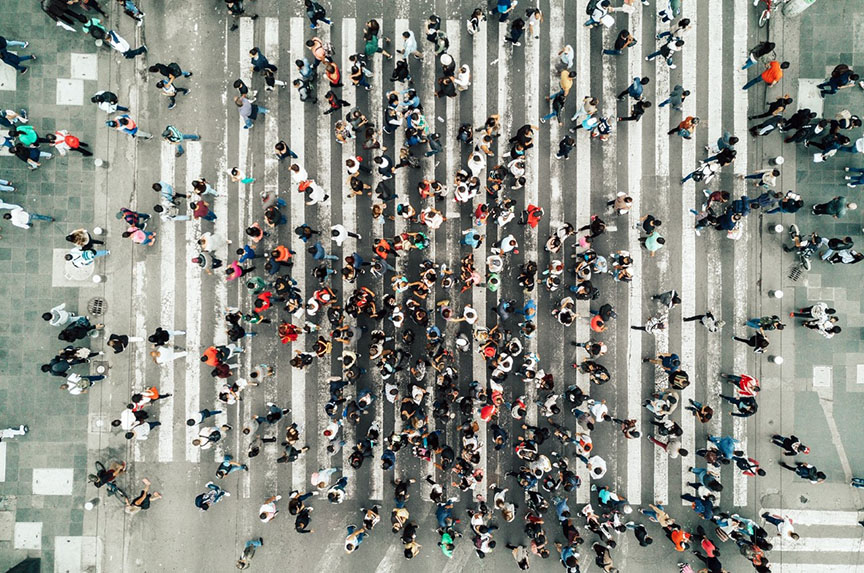 An aerial view of a street crossing in Mexico City. (Getty Images)

Open up a newspaper today and it seems like trends are pointing to one global crisis after another. A recent United Nations report suggested that one million plant and animal species are at risk of extinction by the end of the century. Every day, 45,000 people are forced to flee their homes due to conflict or natural disaster. The West Antarctic Ice Sheet, which contains enough ice to elevate sea levels up to 10 feet, is at risk of collapse.

And then you read a story about a pregnant whale that washed up dead in Italy with 30 pounds of plastic in its stomach, and another one about the two back-to-back cyclones that devastated the people of Mozambique, and at this point, your heart is broken. The human toll and financial costs of these global challenges brings previously unimaginable realities to life.

With all this on my mind, I am excited to have joined the Atlantic Council to lead a new multi-disciplinary team and enterprise, the Adrienne Arsht-Rockefeller Foundation Resilience Center, which will help address these massive challenges.

I come to my new role with a blend of private, nonprofit, and government experience. I joined the Atlantic Council from Bank of America as Global Environmental and Social Risk Executive and prior to the bank, from the Nature Conservancy as head of global climate risk and resilience. I didn’t grow up saying, “I’m going to have a career as a resilience expert.” But I’m so gratified to be in this role, especially at this time, when the challenges that the world faces are so enormous.

One of my new colleagues, when she sees me in the hall, smiles and says, “Paging Dr. Doom, paging Dr. Doom.” We laugh but know that our collective work is urgent and not funny. But just how much daunting science and inevitable, irreparable harm to people and planet can we all take?  As humans, we can hold simultaneously contradictory perspectives. We can feel skeptical that we can do anything about all the bad things happening around us in the world.  But we also know that we have the collective power, innovative thinking, passion and resources we need to address these problems and make meaningful, lasting improvements to people’s lives.

Harvard University psychology professor Steven Pinker’s scholarly work on positive social change over the last several decades highlights huge forward strides for humankind, such as making significant gains in reducing child mortality, extreme poverty, and illiteracy across the world. Other achievements are shown in the many stories of communities that have come together to improve lives and living conditions. For example, the residents of Miami designed and passed a $400 million bond measure to help pay for sea level rise protections and defense against storms. On a more systemic scale, there is an increasingly strong movement to build infrastructure proven to withstand wind, floods, and wildfire on the horizon.

As the Adrienne Arsht-Rockefeller Foundation Resilience Center grows, we need to match our capacity and our partners with our ambition.  Recognizing the many important efforts around the world currently, we will clearly define how we account for someone “reached” by a resilience solution. To be as effective as possible, we will work with individuals, communities, governments, and other institutions. We must work with companies, which rely so heavily on the functioning of communities for reliable workforces and stable supply chains, and which will at some point be required to quantify and disclose their financial and physical risk exposure to climate change for investors and regulators.

It is our hypothesis that by looking at evidence of what has worked before—the proven, on the ground interventions and policies—and extending those ideas in new ways, we can help reimagine the future and build a better world.  We have partnered with the Urban Institute, a non-partisan, nonprofit research organization whose work identified resilience solutions with evidence of their effectiveness over the last ten years, including tree plantings to cool blazing hot cities, regional policy and project collaborations such as the Southeast Florida Climate Change Compact that includes more than a third of Florida’s population, and microinsurance for migrants and their host communities struggling with specific events like floods and storms. We will build on strategies that we can repeat, modify, and scale.

The Adrienne Arsht-Rockefeller Foundation Resilience Center’s commitment to enhance the resilience of one billion people by 2030 might sound overwhelming to even the most ambitious among us. But to put this number in a more manageable context, consider that almost 900 million people are registered to vote in India (600 million voted during the recent national election) and that in the Paris Climate Accord, thirty-eight countries feature climate risk insurance prominently for their adaptation commitments—and those countries comprise more than four billion in population. Further, one billion people live in extreme poverty in slums and settlements in cities around the world, and the same number of people participated in Earth Day activities in April of 2019.

As the world approaches nine billion people by 2050, we are convinced that this is a goal we can reach with practical, scalable interventions.  We have taken on this endeavor because we recognize that in crises there are opportunities, and in building resilience we can ensure a secure and more prosperous world.

Skepticism is natural. We acknowledge that the greatest obstacle to achievement may be the limitations we place upon our own beliefs of what is possible. We have to think big, proceed with a dose of humility, and believe that we will reach our goal by working together. As Harvard Law professor Roberto Mangabeira Unger puts it, “At every level the greatest obstacle to transforming the world is that we lack the clarity and imagination to conceive that it could be different.”

At the Adrienne Arsht-Rockefeller Foundation Resilience Center, with our partners, we will fight for that clarity and imagination and do all we can to meaningfully improve people’s lives and build a more resilient world.

Kathy Baughman McLeod is the director of the Adrienne Arsht-Rockefeller Foundation Resilience Center at the Atlantic Council. Follow her on Twitter @KBMcLeodFLA.

This work is made possible by Adrienne Arsht, our Center’s visionary founder, and by the Rockefeller Foundation, whose 100 Resilient Cities program has built a resilience movement around the world.