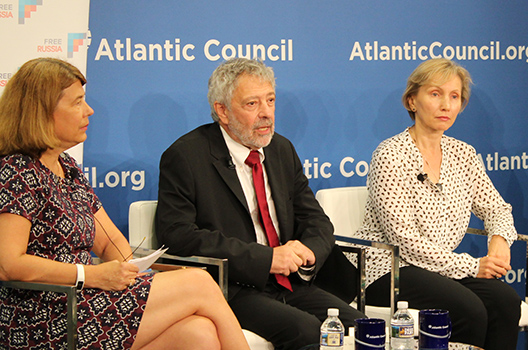 Russia is using the same disinformation playbook to sow doubt about the attempted assassination of Sergei Skripal and his daughter as it did in the case of Alexander Litvinenko’s death, Marina Litvinenko, the slain Russian intelligence officer’s widow, said at the Atlantic Council in Washington on September 11.

Russian authorities are now “trying to use a case of Alexander Litvinenko to destroy the future case of Yulia and Sergei Skripal,” Marina Litvinenko said. Alexander Litvinenko died in London in November 2006 after being exposed to radioactive polonium-210, allegedly given to him in a cup of tea. Litvinenko had emigrated to the United Kingdom in 2000 after serving for almost two decades in Soviet intelligence and then eventually Russia’s Federal Security Service (FSB).

When Litvinenko left the intelligence service, he became a fierce critic of Russian President Vladimir Putin’s security services, attempting to delve into the connections the FSB had with growing organized crime in Russia and writing a book claiming FSB agents were responsible for bombings in Moscow that precipitated the second Russian invasion of Chechnya.

Marina Litvinenko was joined at the Atlantic Council event by Alex Goldfarb, a friend of Alexander Litvinenko. Goldfarb filed suit in a US court on September 6 against Russian television channels RT and Channel One alleging that both outlets intentionally lied about the circumstances of Litvinenko’s death and falsely accused Goldfarb of murdering Litvinenko.

Although an official British inquiry into Litvinenko’s death listed former Russian intelligence agents Andrei Lugovoi and Dmitri Kovtun as the primary assailants, RT and Channel One have aired several reports alleging that Goldfarb killed his friend. The programs included remarks from Litvinenko’s father, Walter, accusing Goldfarb of being a CIA agent. None of the broadcasts mentioned the official British inquiry or the mountains of evidence pointing toward Lugovoi and Kovtun.

Goldfarb noted that there is almost no scenario in which Lugovoi or Kovtun will face justice in the United Kingdom, but “now [Russian authorities] claim that I was the one who killed him, it adds insult to injury,” he said. “This is a motivation for me to fight back.”

Goldfarb’s lawyer, Bertrand Sellier, said that the two Russian television channels would be susceptible to his client’s defamation suit because both operate extensively in the United States and make a considerable amount of money from US cable deals. Either RT and Channel One will have to claim that their programs were based on Walter Litvinenko’s personal opinion—unlikely given the polished nature of the broadcasts featuring the elder Litvinenko—or will have to argue that they are immune because they are arms of the Russian government, requiring them to “make a statement that the entire way they present themselves to the world is a sham,” Sellier said.

Goldfarb called Walter Litvinenko’s comments accusing him of killing Alexander Litvinenko part of a “Shakespearean tragedy,” after the elder Litvinenko’s struggling finances made him turn to the Kremlin for support. Marina Litvinenko said this strategy was straight out of the “old history of KGB tricks, which used relatives against each other. They could bring up ex-wives to say something against people who became dissidents and critics of the regime. It is still the same, nothing has changed.”

Marina Litvinenko argued that the importance of her husband’s case has increased after the poisoning of Skripal, a former Russian intelligence agent  in Salisbury in March 2018. Skripal and his daughter, Yulia, were hospitalized for an extensive period of time. A British man was later hospitalized and a British woman died after being exposed to the Novichok agent used to poison the Skripals.

The incident prompted the expulsion of Russian diplomats from Western nations, including the United States which expelled sixty Russian officials.

The United Kingdom on September 5 announced charges against two Russian men it believes poisoned the Skripals. British Prime Minister Theresa May told Parliament that based on the intelligence gathered so far, “the government has concluded that the two individuals named by the police and the CPS [Crown Prosecution Service] are officers from the Russian military intelligence service, also known as the GRU.”

“This was also not a rogue operation. It was almost certainly approved outside the GRU, at a senior level of the Russian state,” May said.

Litvinenko applauded the British government’s response to the Skripal case but warned that “it will be the same scenario of the Litvinenko case. [British authorities] will name suspects [and] ask for extradition, but Russia will never do this.”

Marina Litvinenko supported launching a public inquiry into the Skripal case, as was done in the case of her husband’s death, as “the more information we know about this case… the more possible [it will be] to prevent such a crime again.”

Goldfarb added that he “would like to see the executives and key players of the Russian propaganda machine such as the CEOs of Channel One Russia and Russia Today on the American sanctions list. The narrative is not that Alex Goldfarb killed Alexander Litvinenko, but that the Americans and the CIA killed him through Alex Goldfarb.”

Marina Litvinenko explained that her and Goldfarb’s quest for truth was about combatting the “Russian propaganda machine.” In Russia, “people became confused—what is true and what is not,” she explained. “They believe that this is just alternative opinion… But we see how it is dangerous, because propaganda is not just alternative opinion. This is quite a dangerous situation, not just for Russian people in Russia, but also for Russian people living people abroad.”

Both Marina Litvinenko and Goldfarb acknowledged that their quest against Moscow’s propaganda machine was an uphill fight, but Marina Litvinenko took courage in the success she has already had building awareness about her husband’s case.

“I couldn’t believe how much it cost the Russian state to fight us,” she said. “We didn’t have anything—except truth.”

David A. Wemer is assistant director, editorial at the Atlantic Council. You can follow him on Twitter @DavidAWemer.