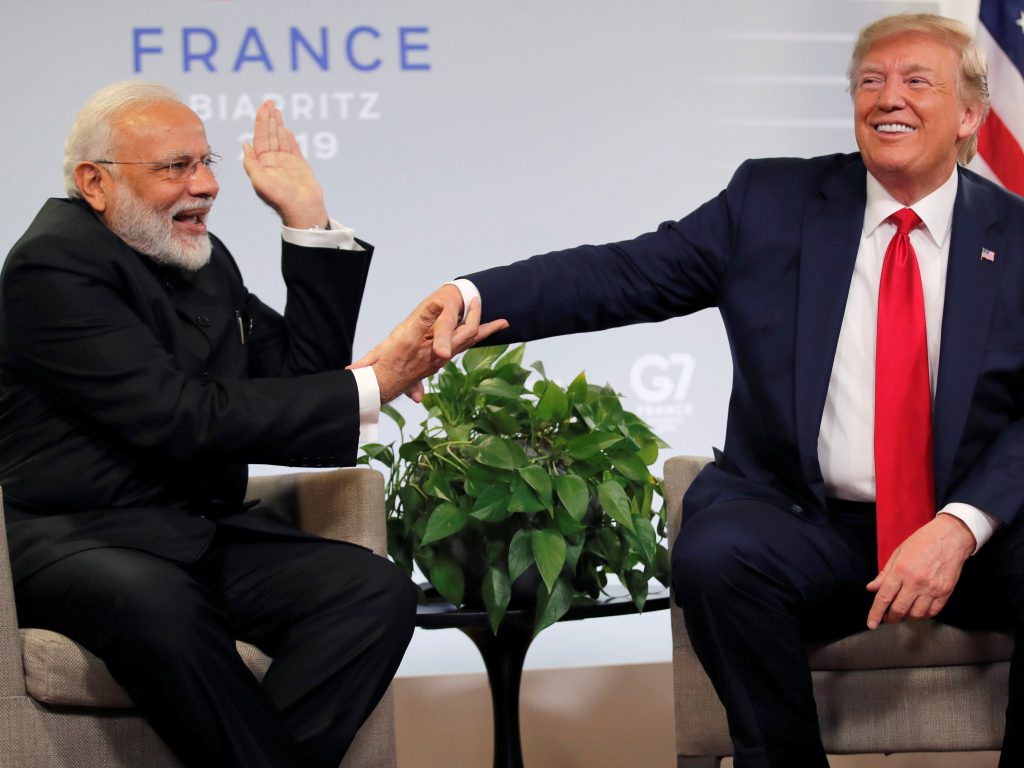 For all its bluster of becoming a self-made world power with a $5 trillion economy in the next five years, India finds itself purchasing US arms to placate Washington.

“Make in India” was a stated goal of the Modi government that sought to foster domestic manufacturing for import substitution, particularly in the field of defense. But, shrinking manufacturing output has been pulling down industrial growth, with little evidence of any strong military industry complex taking shape. The result is that Prime Minister Narendra Modi’s “Make in India” mission is being smothered by US President Donald Trump’s overarching “America First” policy, where, despite bilateral cordiality, Washington is frequently undermining India’s interests to further its own.

India’s defense imports, particularly from the United States, which has now emerged as the second biggest supplier of military hardware to India, have surged. US arms sales to India have risen more than fivefold over the last five years and now account for 12 per cent of India’s defense imports, according to a recent study by the Stockholm International Peace Research Institute (SIPRI). Russia, historically India’s largest arms provider, saw its share of defense exports fall from 76 percent to 58 percent.

In the Indian context, defense procurements are largely a political decision rather than one premised on military and security considerations. Prime Minister Modi signed a €7.87 billion deal with Dassault Aviation for thirty-six Rafale fighter planes for the Indian Air Force (IAF) on his April 2015 state visit to France.

The deal implicitly annulled a 2014 agreement between the previous Congress Party-led government and Dassault for 126 Rafales for a much cheaper price, eighteen of them to be imported outright and the balance 108 manufactured under license in India by state-owned Hindustan Aeronautics Limited (HAL). Clouding Modi’s deal for thirty-six Rafales further was the absence of any clarification on the ninety aircraft left out of his agreement and which were required by the IAF under the original tender. The IAF had made known this requirement back in 2005 when it had issued a Request for Information (RFI), or initial tender, for new jetfighters to replace the vintage Soviet-era MiGs that had been its mainstay since their induction in the early 1980s.

The Congress government had chosen Rafale over other contenders, namely, Lockheed Martin’s F-16 Block 70, Boeing’s F/A-18 E/F Super Hornet, Saab’s JAS-39 Gripen, Eurofighter’s Typhoon and Mikoyan-Gurevich Corporation’s MiG-35. US Ambassador to India, Timothy Roemer, resigned the very next dayafter Lockheed’s and Boeing’s elimination from the tender. The Pentagon expressed its disappointment while reiterating a desire “to continuing to grow and develop our defense partnership with India.” And US President Barack Obama stressed to Indian Prime Minister Manmohan Singh that favoring a US fighter would cement the Indo-US strategic partnership and be mutually beneficial in creating thousands of jobs in both the countries. Shortly thereafter, India cleared a $4.1 billion deal with Boeing for ten C-17 Globemaster-III giant strategic airlift aircraft for the IAF, with options for six more for $1.7 billion. The deal with India saved 23,000 US jobs.

In April 2019 the IAF issued a successor RFI for a total 114 jetfighters at a cost of $18 billion. The RFI has elicited responses from the same six contenders, with Lockheed offering its F-21 that it indicates has been “specifically configured for the IAF,” alongside its F-16 Block 70. The contract entails the import of eighteen of the aircraft in fly-away condition, with the remaining ninety-six to be built in India by a joint venture with a private sector partner under the strategic partnership model. With the Oval Office long intent on an Indian decision favoring a US fighter, it is widely perceived that the scaled-back Rafale deal was designed to allow Washington to participate in any follow-up contract on IAF jet fighters.

This piecemeal approach to India’s defense purchases undermines India’s security as it threatens to hurt India’s air defenses. The IAF is already hamstrung by a depleting fleet and is anticipated to diminish to just thirty-two squadrons of serviceable aircraft over the next two years against a sanctioned strength of forty-two. As there is considerable lag between the selection of military equipment and its delivery, much time has been lost through the partial deal.

It is no coincidence that both Lockheed and Boeing have positioned themselves expectantly in this regard. Lockheed signed an agreement with Tata Advanced Systems Limited (TASL), of the Mumbai-based Tata Group, in June 2017 for joint production of the F-16 Block 70 in India.

TASL has a similar agreement with Boeing, signed in November 2015, to co-develop integrated systems in aerospace and defense, starting with fuselages of the AH-64 Apache, acknowledged as the world’s most lethal combat helicopter. The first fuselage was delivered in June 2018.

An interesting question is what concessions on defense the White House extracted from India in exchange for treating it differently from China and Turkey in the three countries’ purchase of Russia’s sophisticated S400 Triumf air defense shield. The United States has invoked its Countering America’s Adversaries Through Sanctions Act (CAATSA) against Beijing and Istanbul. CAATSA prescribes sanctions against countries or individuals conducting defense deals with Russia that the United States holds responsible for cyber interference in the US 2016 presidential election and invading eastern Ukraine. But Washington has responded differently to New Delhi’s $5.4 billion purchase of five S-400s by deeming it unrealistic to prohibit Russian arms sales to India.

While the Modi government had been enthused by the US president’s initial pledges of an unshakeable friendship and has sought to reward Washington with these valuable arms deals, Trump has unleashed some drastic measures against India concerning trade, agriculture, immigration, and even its relations with Russia and Iran that have forced the country on the back foot.

Accusing India of “unacceptable” trading practices in imposing tariffs on certain US goods as also of the advantage it enjoys in bilateral trade, the president withdrew India from the US Generalised System of Preferences (GSP) that permits duty-free entry into the United States of designated items. He also criticized India’s $24.3 billion trade surplus in the exchange of goods and services worth $142.1 billion in 2018. If India’s $18 billion contract does favor a US warplane, Washington stands to gain even further as it looks to signing arms deals worth an additional $10 billion with New Delhi.

Trump’s carrot-and-stick policy appears to be paying rich dividends it its relationship with India, but, at least in the defense sector, the terms of the deals appear to favor one partner over the other.

Sarosh Bana is an executive editor with Business India.