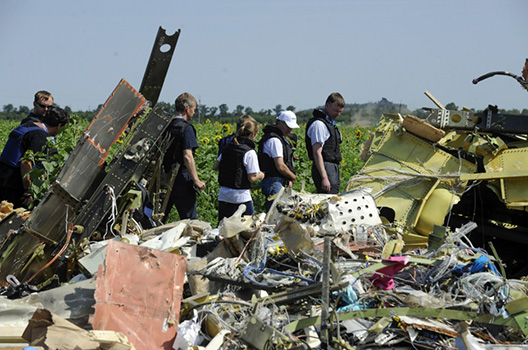 As the international community works both to calm the Russian-Ukrainian conflict in southeast Ukraine and to assure a credible investigation of the Malaysian Airlines disaster there, the main body in that effort is the Organization for Security and Cooperation and Europe. But the OSCE is limited in its roles because it relies on the consensus of its fifty-seven members, and thus needs Russia’s permission for the missions it takes on. Those limits are so severe that that a broader diplomatic engagement, and perhaps the creation of a new forum to support Ukraine, is required, several analysts write in the past week.

With Russia’s permission, the OSCE is running a “Special Monitoring Mission” in Ukraine that has deployed 250 civilian international observers throughout the country to report impartially on events and to facilitate contacts among combatant forces. The organizations is authorized to send 500 observers, but said June 30 it cannot operate at full strength because the repeated abductions of its observers mean more personnel would simply be at greater risk.

Given the multiple, independent reports of Russian weapons and fighters – nationalist army veterans, Chechens, Cossacks, and others – crossing the Russia-Ukraine border to reinforce Russia’s proxy forces, a critical task is “a robust border-monitoring mission,” writes Vladimir Socor, an analyst with the Washington-based Jamestown Foundation. For the OSCE to take on any such role, it would need Russian permission . Last month, Russia offered to host OSCE observers and Ukrainians in at least some of Russia’s border posts in the region –a situation in which they could not be guaranteed freedom of movement or action. (Moscow conditioned its offer on Ukraine’s extension of its June 20-30 ceasefire, during which the Russian-backed militias in southeast Ukraine continued their attacks on Ukrainian troops.)

The OSCE’s weak position in the conflict zone (evident since Russian-backed forces refused entry to Crimea to an initial OSCE military observer mission in February) is part of a broader impotence of the West in the several international dialogue or contact groups established since Russia’s assault began, Socor notes. These include the US-Russian dialogue led to the April 17 Geneva agreement on calming the conflict, an accord then joined by the European Union and Ukraine. At Russia’s insistence, the Geneva accord “implicitly but clearly treat[ed] the conflict as an internal one” within Ukraine, Socor wrote at the time.

In June, when Russian President Vladimir Putin attended anniversary celebrations of the Normandy invasion, Russia established a four-way contact group with Ukraine, France and Germany. That formula achieve a Russian goal of excluding the United States and Poland, each of which would have lent strength to Ukraine’s position in talks. France and Germany wound up joining Russia in pressuring Ukraine’s President Petro Poroshenko to continue the June 20-30 ceasefire that had gone so disastrously for his government, leaving Ukraine isolated diplomatically.

Most recently a “Trilateral Contact Group” has gathered Ukraine, Russia and the OSCE, along with representatives of the Russian-sponsored “people’s republics” proclaimed by (Russian-dominated) militias in Donetsk and Luhansk provinces.  Moscow directs two of the participants and holds a veto over a third, leaving Ukraine again isolated.

Especially with such weak Western presence in the main contact groups, “the OSCE’s involvement in Ukraine’s security affairs (conflict management in the Contact Group, border monitoring subject to Russia’s conditions) is anachronistic,” Socor wrote July 18. “A Western-oriented country cannot entrust its security arrangements to an organization that can only operate with Russia’s prior consent, as the OSCE’s charter and ground rules require.”

The call for a broader, more vigorous international forum on Ukraine is echoed by four leaders of the Russia Working Group at the private Trilateral Commission. Writing July 20 in the Wall Street Journal, the authors said, “we believe that Ukraine’s dire economic situation calls for the establishment of a Friends of Ukraine task force … of independent leaders from North America, Europe, Asia and Russia” that “should promote Ukraine’s sovereignty, encourage economic reforms, and coordinate efforts with governments and nongovernmental organizations that seek to help Ukraine.”

The breadth of such a group would prevent the Russian domination that has applied to the contact groups of two to five members that that marked diplomacy around the conflict so far. The writers, including former undersecretary of state and Atlantic Council board of directors member Paula Dobriansky, say that such a Friends of Ukraine group could boost the role of non-government organizations working on Ukraine and its crisis. “Ukraine shouldn’t be a battleground between countries of widely diverging national interests,” they write. “The task force would provide a vehicle through which western NGOs and their Russian counterparts could strategize and collaborate as part of a unified effort to assist Ukraine’s transition.”

That sounds right. A search for Russian non-government organizations to join this effort would keep elements of Russia engaged in potentially productive ways with Ukraine even as Putin’s government has done the opposite. Given Russia’s permanent status as Ukraine’s biggest and most powerful neighbor, that engagement ultimately will be necessary for a peaceful and stable Ukraine.

Working now with Russian NGOs that can be engaged in support of humanitarian, economic, social or other parts of Ukraine’s struggle to rebuild its independence would help prepare for the day when the Moscow government might again become a partner for Ukraine and the international community. It would also keep them energized for the day when building democracy, transparency and economic reform is again permitted as part of the public agenda in Russia itself.

James Rupert is an editor at the Atlantic Council.