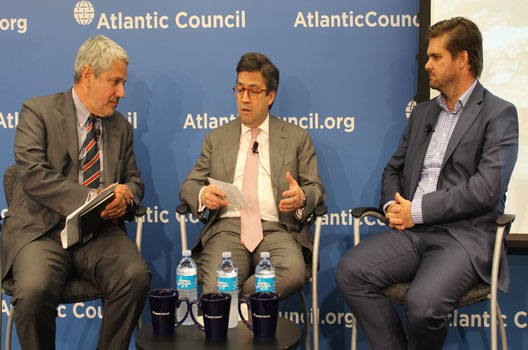 From left: Peter Schechter, director of the Latin America Center, moderates a discussion at the Atlantic Council with Luis Alberto Moreno, president of the Inter-American Development Bank and Ben Powell, founder and CEO of Agora Partnerships. (Atlantic Council/Nicolas Jimenez)

With the signing of a ceasefire agreement between the Colombian government and the Revolutionary Armed Forces of Colombia (FARC) on June 23, many have asked how the deal will help the country recover from decades of violence. However, the solution may depend on not just the agreement, but also the stable economic development of civil society at large, according to development economists.

“We need peace, not just from the FARC, but for all Colombians, which begins from the bottom up,” said Luis Alberto Moreno, president of the Inter-American Development Bank (IDB).

“The question lies in what kind of post-conflict Colombia we want to look like,” he added, stating that the majority of support for development must come from the people.

Moreno’s remarks highlight the instability borne out of violence and the resulting deficit in public goods and social services that prevent economic growth in Colombia. The nearly fifty-year-old civil war forced residents to flee the countryside to makeshift housing in urban areas—outside the range of basic services such as water, electricity, transportation, and schools. Rural communities were most affected by the conflict, creating a sharp social divide in contrast to burgeoning cities in Colombia such as Medellín. Coupled with poor infrastructure and a lack of access to education, a large number of Colombians are unable to fully realize the benefits of a country at peace after decades of war.

The IDB and certain economic incubators provide loans, grants, and technical assistance to startups across Latin America focused on reducing poverty and inequality—one of which being Agora Partnerships. Organizations like Agora offer early- and growth-stage companies that focus on solving social challenges with consulting support and investor access. These kinds of partnerships create an environment for responsible entrepreneurship in Latin America.

They make use of “market forces to create solutions to social, economic, and environmental problems,” said Helms.

Agruppa and Suyo are just two of Agora’s success stories. Agruppa is a food distribution company based in Bogotá that sources produce directly from farmers to distribution outlets, where small-business vendors are able to buy and sell local produce at discounted prices. Since these small retailers account for seventy percent of food consumed in Colombia, residents have greater access to healthy and safe food—especially in low-income areas. Suyo—a property rights information company—secures property rights for Colombians after they are forced to flee the countryside for makeshift housing where they have no legal rights. Property rights then allow for inheritance by younger family members, a credit history, and requests for social services that many Colombians are still living without.

However, “the challenge remains of how to connect others that are less educated and have less access to information to these skills,” said Moreno.

“Technology will be a great enabler to connecting individuals with the necessary value chains,” he said, as well as creating an “ecosystem” for entrepreneurship, including the consulting, capital, and investments that IDB and Agora have started.

Both companies, as well as Colombia at large, are looking to scale up development efforts more quickly. However, poor infrastructure as well as the regional inequality between rural and urban areas have slowed the pace of progress.

“The challenge with entrepreneurship [as in peacebuilding] is execution,” Powell contended.

Entrepreneurship and international support behind small- and medium-sized enterprises have allowed Colombians to start down the long road to peace. But only time will tell how effective such development strategies will be.