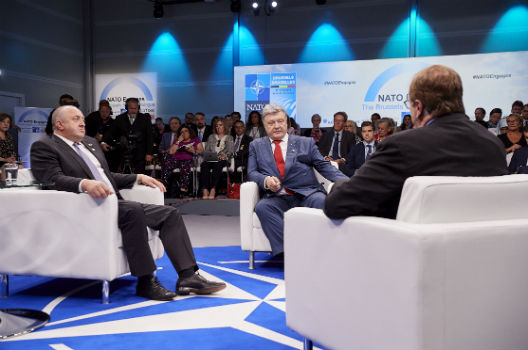 Ukrainian President Petro Poroshenko expects Russia’s role in the conflict in his country to be a priority when US President Donald J. Trump meets Russian President Vladimir Putin in Helsinki on July 16.

Poroshenko said that meeting, the first summit between Trump and Putin, could go either way, but trusted that “Ukraine would be among a top priority” for Trump.

The Ukrainian leader said that sending peacekeepers and working on a peace deal were the top priorities for ending the conflict in Eastern Ukraine. He argued that the “presence of the peacekeepers can save from fifteen to twenty-seven [soldiers’] lives and ten lives of civilians, every single month.”

Poroshenko participated in a discussion with Georgian President Giorgi Margvelashvili at NATO Engages, an event jointly hosted by the Atlantic Council, the German Marshall Fund, Women in International Security, and the Munich Security Conference on the sidelines of the NATO Summit in Brussels. Frederick Kempe, president and chief executive officer of the Atlantic Council, moderated the discussion.

In his press conference before departing Brussels on July 12, Trump was asked whether he recognizes Crimea—which Russia annexed in March of 2014—as part of Russia. “What will happen with Crimea from this point on? That I can’t tell you, but I’m not happy about Crimea,” Trump said, laying the blame for the situation on his predecessor, Barack Obama.

Poroshenko said he was pleased that NATO leaders had agreed to label Russia an “aggressor” in their documents on the ongoing conflict in Eastern Ukraine. Margvelashvili said that he heard confirmation from NATO’s leaders “that what the Russian Federation has done is aggression and occupation, and that this will not be tolerated.”

Poroshenko and Margvelashvili said that their meetings with NATO leaders at the Brussels Summit were “very promising” and remain convinced that both their countries continue to have a path toward eventual membership of the Alliance.

Despite the reported outburst by Trump over allied burden sharing during the scheduled meeting between NATO leaders and the presidents of Georgia and Ukraine, both leaders detailed a positive meeting.

This message of support was important as “there are no two countries whose fate lies more in the hands of the unity of the West” than Georgia and Ukraine, said Kempe.

Although neither leader offered an exact description of the reported argument on defense spending, both said that the meeting was positive, with Margvelashvili appreciative of the fact that the subject of the discussion is “burden sharing on defense —defense against [the] aggressiveness of Russian Federation.”

In their reports from the meeting, NATO leaders expressed their support for both countries, and reaffirmed their 2008 Bucharest Summit decisions to promise Georgia an eventual membership opportunity and continue close cooperation with Ukraine. Both presidents detailed the necessity of joining NATO.  Poroshenko described how Ukraine’s relinquishing of nuclear weapons after the fall of the Soviet Union was predicated on the belief that Russia and the international community would guarantee Kyiv’s security. Russia’s annexation of Crimea in March of 2014 and military activity in Eastern Ukraine ever since has made that arrangement defunct, and Poroshenko asked, “do we have any other choice but to go to NATO?”

Margvelashvili pointed to the significant support Georgia has given to NATO missions in Afghanistan as evidence of his country’s desire to join the Alliance, and warned that unclear messages on Georgia’s path to NATO are “much more provocative for Russia… because unclear messages…[and] not taking bold steps, would provoke in any political system more hawkish thinking.”

In a direct reference to potential Russian opposition to NATO expansion, Poroshenko was clear that “no other country in the world can prohibit [the] Ukrainian people or Georgian people [from] making the decision to be a member of NATO.” He suggested that public support for NATO membership in Ukraine had grown from 16 to 54 percent since 2013 and pointed to recent security and defense reforms as evidence that his country is moving toward membership.

Although significant challenges still remain, especially the threat from Moscow, both leaders will leave Brussels knowing that “the door of NATO is open for Ukraine and for Georgia,” according to Poroshenko.

David A. Wemer is assistant director, editorial at the Atlantic Council. You can follow him on Twitter @DavidAWemer.